Stop the World, I wanna get off!!

So the governing board has come and gone and the meetings went off without a hitch. Our public policy forum has ended and the reception/open house I threw at our office for 160 folks went smoothly. After this all ended I finally decided to go to a doctor about my shoulder that has been bothering me off and on for the last couple of months. I think it started after I lunged after a cat outside that had caught a bird. I misjudged and fell on my open hand jarring my right shoulder badly. After the initial pain and soreness went away I thought it was fine. Then every once in a while it would bother me like it was just wasn't right in its socket. Then after the snow in February and the subsequent shoveling the shoulder pain got worse and every time I bent over an intense pain would go down my arm like someone was squeezing my muscles. Then about two weeks ago my thumb and index finger of my right hand started tingling and going numb whenever I bent over. Finally went to an orthopedic doctor that after about 4 xrays and tests and questions decided I must have pinched a nerve in my neck. He gave me a prescription for pain meds and physical therapy 3 times a week for six weeks. I can already tell after just two sessions that it feels ever so slightly better.

This past Friday I had a pt session at noon. Since I need to go to Silver Spring for my appointments and the their offices are close to home, I decided to take the afternoon off. So what if it was storming with high winds and a cold rain all day. I thought I would go to my therapy session, treat myself to lunch and come home to take a well deserved nap. The session went well and I had a nice lunch at Eggspectations, a chain that has opened up in Silver Spring. I even ordered a slice of cake to go. The cake was called Heaven and Hell. It consisted of two layers of angel food cake, with a layer of devils food cake, a layer of peanut butter mousse and a rich dark chocolate frosting. I pull into my driveway just when the rain has changed to sleet. Ah, perfect, I thought. I get in the house and go into the bedroom to find that Butterball, who has been sick with a respiratory infection, has thrown up about three times with blood in the vomit (sorry if this makes you queasy!). So I quickly call the vet and he said he could see Butterball around 4:30. It was already around 3:00, so that gave me some time to clean up the bedroom. Oh, I also realized that I had brought my cat crate over to my neighbor's house after I dropped off one of her cats that had escaped. I called and, of course, she wasn't home. I had to dig around my junk drawer to find her keys, bundle myself up and run across to her house in the wind and sleet, get in her house and rummage around her basement until I found my crate. By the time I had gotten back home, it was time to load up Butterball and be on our way. I love my vet but his offices are in the 4 corners area of Silver Spring, a VERY congested area, the crossroads of two very busy roads (Colesville and University Boulevard) where the beltway has an on and off ramp. Great, need to drive to 4 corners during rush hour ... on a Friday ... during a sleet storm ... with a wailing cat. So much for my quiet afternoon!!

The vet was concerned because he could hear that Butterball's lungs were very congested. He felt around his abdomen and feeling nothing unusual, decided Butterball was throwing up because of the congestion but took some blood for tests to make sure and put him on an antibiotic.

Since then Butterball has perked up really well. He is still congested but no more throwing up and basically his same old sweet self. That is a big relief. At 14 years old Butterball is the oldest of my herd and the patriarch. I call him the Ghandi of cats as he has never reacted meanly or violently to anything I have ever done. Even when I have to tell him NO, you CAN'T go in the basement, he just flops down and I have to walk over and pick up his limp body and take him away from the basement steps (see, that is his passive resistance). 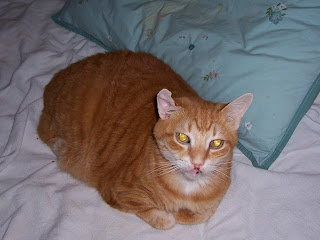 "I haven't been feeling well lately, might I have a bite of that cake?"

Oh my gosh, what a horrible day! Thank goodness it seems like Butterball is going to be okay. Did you ever get to eat that piece of cake? Also, sorry to hear about your pinched nerve. I hope D.C. is finished with the ice and snow storms for the season--first day of spring on Wed.!

Yes, I finally DID get to eat the cake and it was quite decadent and delicious! I got home from the vet's around 6:00. Had to give Butterball his first dose of medicine, feed the other cats, clean the litterboxes, then I said ENOUGH! I poured myself a diet coke and sat and ate the entire (BIG) piece of cake while watching the Simpsons. Any time a cat came by to jump on me I just pushed my leg out to stop then and yelled NO, GO AWAY! For cats, they can be so needy sometimes ;-)

Hey there,haven't visited for awhile. Had the Lentcsh's here and had a nice time. We laid in the sun,had margaritas by the pool and Jeff actually jumped in. Nosnow or ice here:)
Hopefully Butterball i fully recovered by now.
I may havea pinched nerve also! I have had numbness and tingling in 3fingers on my left hand for several weeks. Just had an xray which the Dr. says was only done to appease the insurance company.If that shows nothing then I have an MRI.
The cakes sounds great.
Later BP