The Bestest Place on Earth 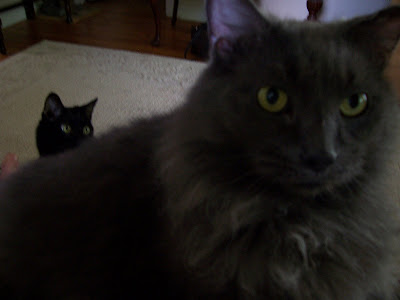 Mom's lap after she has been out of town. According to my neighbor who was taking care of my herd, the inside crew seemed quite depressed. Not one of them came out of the bedroom the entire time I was gone (well at least when my neighbor was there). Apu, I could understand. But Sweet Pea and Woody are so friendly and curious with everyone I was very surprised to hear this.

So, my first morning back I sat on the couch to see who would be first. Usually Woody is the lap hog, but as you can see from the above photo, Sweet Pea beat him to it. Woody decided to bide his time by chewing on his back leg, when all of a sudden he looked up and saw this... 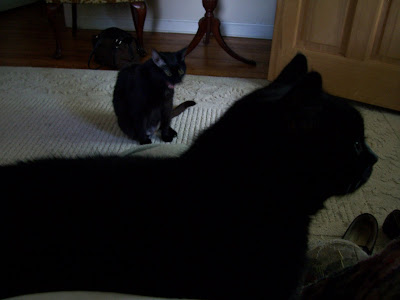 Sweet Pea jumped down and Apu quietly sneaked up. I think you can see Woody's surprised expression. I believe he is saying "Wha hoppined?" Well enough is enough. Woody was not going to sit around waiting for Apu to leave. 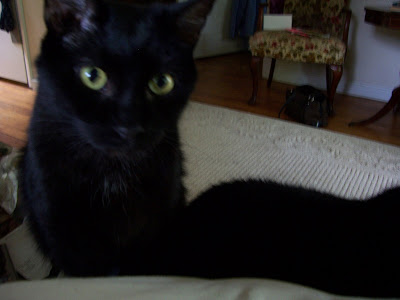 He decided to squeeze his way onto my lap with Apu not giving an inch. Although I frequently joke about Woody's lack of intellectual muscle, he does have a few frequently used tricks up his sleeve. 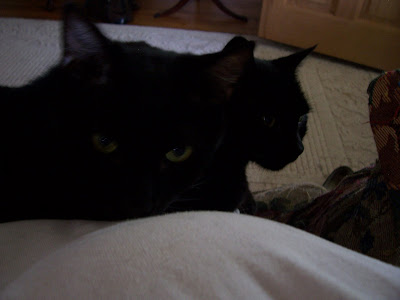 Oh look at those devious eyes! He very slowly moves across my lap, making sure he is between me and the other cat. This results in one of two things. Either the first cat will feel too squeezed and will jump off, or in the close quarters will start grooming Woody. It's a win-win situation as far as Woody is concerned. 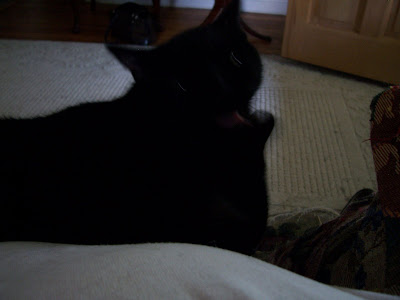 Isn't it nice to be welcomed home by your fur-kids?

Welcome home! I'm sure the cats are all so happy to have you back, even if they all have to share. that Woody is pretty sneaky!

Glad you are home--and relaxing with your kitties. And, obviously, they are glad too.

I'm sure the cats are all so happy to have you back....lol..
--
Jack
Best Affordable Security Systems Suitable for Renters and Apartments, Business and RV