The Legend Lives on...

from the Chippewa on down of the big lake they call Gitchee Gumee. (The Wreck of the Edmund Fitzgerald, by Gordon Lightfoot)


I was always fascinated by Lake Superior and spending a few days on its shore last month have rekindled my interest. My new dream would be to spend some time in the late fall, early winter up in Grand Marais on the shores of the lake during a storm!! Ooooo, scary!!

I found this little fact filled nugget on the internet...

Not only is Lake Superior the largest of the Great Lakes, it also has the largest surface area of any freshwater lake in the world. It contains almost 3,000 cubic miles of water. You would need all the other Great Lakes combined plus three additional Lake Eries to fill it. With an average depth approaching 500 feet, Superior also is the coldest and deepest (1,332 feet) of the Great Lakes. The lake stretches approximately 350 miles from west to east, and 160 miles north to south, with a shoreline almost 2,800 miles long. The drainage basin, totaling 49,300 square miles, encompasses parts of Michigan, Minnesota, Wisconsin and Ontario. Most of the Superior basin is sparsely populated, and heavily forested, with little agriculture because of a cool climate and poor soils.
References: Great Lakes Atlas, Environment Canada and U.S. Environmental Protection Agency, 1995 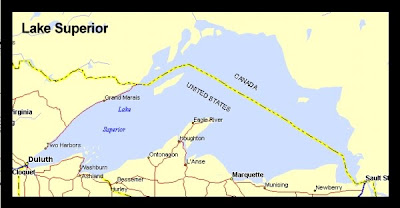 To the left is Minnesota. You can see both Duluth and Grand Marais. Hmmm, I didn't know we were that close to the Canadian border!

Do you remember where you were when you heard about the sinking of the Edmund Fitzgerald in 1975? I distinctly remember watching the local 10:00 news that evening in St. Paul when the breaking news at that point was that authorities lost communication with the vessel during a storm and considered it missing.

If you have the time (it's over 6 minutes long), click on this link for a very moving video tribute to the Edmund Fitzgerald with the haunting Gordon Lightfoot song as background. It has wonderful old footage of the christening of the ship. 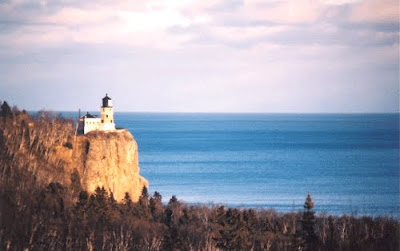 Split Rock Lighthouse on Lake Superior. Although I have a photo just like this when I visited in 2003, this is borrowed from the internet. The lighthouse is no longer in use and is a historical monument, yet they light it every year on the anniversary of the sinking of the Edmund Fitzgerald.

Pedro Garcia Millan said...
This comment has been removed by a blog administrator.
September 11, 2009 at 7:31 PM

I really think there is no place on earth like the North Shore of Minnesota. If you ever decide to take in fall in Grand Marais, there's a really neat birding and nature festival up there. I've been wanting to attend for a few years.
Maybe....?