I've always felt New Year's Eve was a forced holiday. I can't ever remember having a very good time at a NYE party, even when I was dating someone! Unless a neighbor invites me over for a drink and to watch a good dvd, I'll happily stay home and watch the Twilight Zone marathon.

So, if there are any other boring people out there like myself who will be staying home tonight I wanted to alert you to a fun virtual NYE party going on at the Elephant Sanctuary. They started it last year with posting new videos of the girls and a live streaming video with sounds of the girls in their barn at night. Listening to all that trumpeting is not to be missed! I believe they will have new videos posted every hour. Festivities start at 4:00 pm (CST). Check them out at elephants.com.

To get you in the mood, I'm posting the Elephant Sanctuary's latest ele-update. It's a hoot!

During a late night feed last week Carol lost her favorite earflap hat. It was pouring down rain, so she headed back to the barn with the plan to retrieve her hat the next morning. But the next morning the hat was nowhere to be found. All of the staff at the Quarantine barn were on the lookout for this favorite hat, but it was soon accepted that some form of wildlife had found it and carried it off to their den; what a warm bed that would make! But today while Julia was out feeding the elephants, she found Carol’s hat and called immediately to report her find. Carol rushed out with the camera in order to share the news with all of you. Lottie had not only found the hat, but had tasted it, chewed on it, dragged it through the mud, played tug of war with Minnie with it, and finally tossed it on top of her back where it lodged itself in the fresh mud caking Lottie’s back.

It was kind of cute, like a colorful mouse-size throw blanket. When Carol approached to take pictures and retrieve the hat, Lottie was amused and Minnie was by her side, likewise interested in what Carol was so focused on. Lottie approached Carol chattering, and after many photos were taken, was happy to stand still as Carol reached up to the top of Lottie’s back with a long stick to retrieve the hat. Well, it was really no longer a hat; actually at this point it resembled more of a turtle neck sweater, minus the sweater part because of the large openings at either end. It was no longer any use as a hat so Carol tossed the hat to Jessie the dog who grabbed it and raced off as if he had just scored the best toy ever, with Miai and Java on his heels! 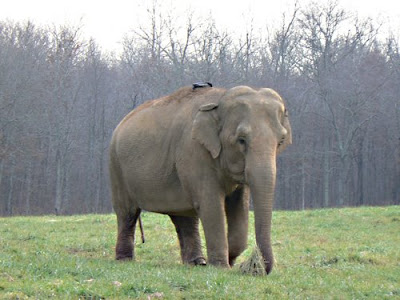 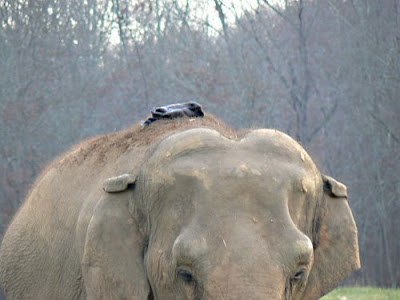 Update: check out the video link below. It is SO adorable! It shows other four-legged folks that call the Elephant Santuary home.

Happy New Year! Now I'm off to check out the elephants.

Oh, BTW, New Year's Eve has never been a big deal to me. IF I'm still awake at midnight, I step outside to see the little fireworks displays. Then, it's time to hit the sack!