I know this isn't an easy subject to think or blog about, but with all the bloggers out there that are animal lovers, I thought I'd bring it up. Do you know what you are going to do with your beloved pet after they die? Some of you I'm sure living in quite rural areas will just bury your pet on your property. But, if you live in a suburban area such as myself you may not be able to bury your pet according to local laws. Or, you live in an apartment or condo...then what? With my first cat Bill, I didn't even think about it until my vet was over at my apartment preparing to put Bill down. Luckily, my sister lives in a very wooded area in Fairfax and we ended up burying Bill in my sister's family's wooded "pet cemetary."

When my 65 pound dog, Jiminy was put down, I first had decided to just have her cremated along with other animals and her ashes would have been sprinkled at a nearby farm. But, it was hard to leave her body lying there on the metal exam table so I ran and told the receptionist that I changed my mind and wanted her individually cremated. The vet's office had a contract with an animal crematorium and said they would call me when her remains had been returned to the vet's office. Okay, well I had no idea how she would come back and was surprised when I picked her up to find her in a sealed wooden box.

Then Butterball started losing weight. I had decided that I would probably go the same route as Jiminy when at the end of February, The Washington Post printed an article about another animal crematorium called Heavenly Days. They sounded so wonderful and caring that I decided to go with them. They are always open for folks to tour the facilities and you can even arrange to watch your own animal's cremation. (I declined.) I'm so glad I used them. I steeled myself to call them a few hours before I took Butterball to the vet for the last time and they were so thoughtful on the phone. Then, the next day they called and left a message letting me know that they had picked up Butterball's body and he was "safe" with them. Their website has a full listing of urns and boxes to choose from. Being of Polish ancestry I was comforted to see that all their wooden boxes were made and hand carved in Poland. I got to pick out his box with an optional plaque attached. You can get the box back sealed or unsealed. They will also do a paw print for you if you wish.

Yesterday, I went and picked up Butterball. 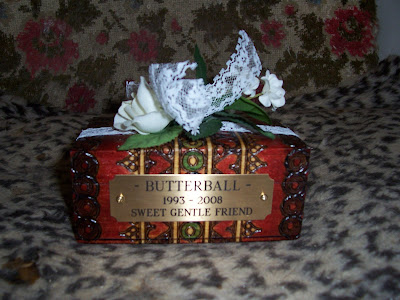 This is how he was presented to me. Below shows you a better view of the beautiful carved box 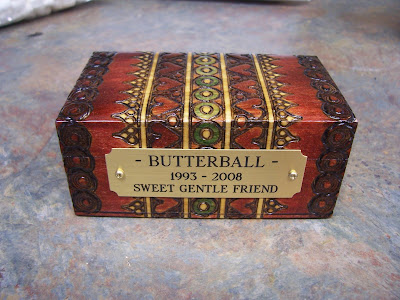 Enclosed in an envelope was this: 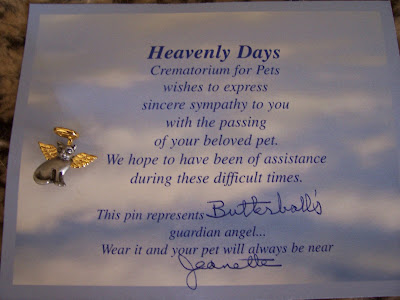 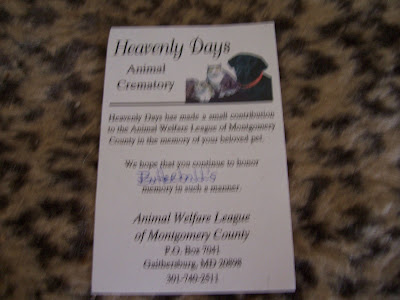 Sorry it's so fuzzy but is says that they have made a small donation in Butterball's name to the Animal Welfare League of Montgomery County. What a wonderful gesture. They were a class act all the way around and I know I will be using them in the future (but hopefully VERY DISTANT future).

So, again, not something easy to think about, but better now then when you are already overcome with grief.

It's good to have Butterball home again.

We had Annie cremated also by a very loving and caring pet cemetery.
They picked up her body from our vet's office and contacted us for the specifics.
We were notified days later that her remains had been returned to the vet, where we collected them with an assortment of very sweet documents and pamphlets.
My daughter, whose lifelong companion she was, gets great closure in knowing Annie's memory will continue to have a place in her life.
I'm glad you have Butterball.

Hi! I have had dogs and/or cats all my life. I have loved them all, and I hate to have favorites, but I do. My cat, Lovey, is my baby. Her health is starting to fail and I am doing everything possible to keep her with me as long as possible. I have thought about what I would do when the time came, and after reading this, I wish we had a place like that around here. The girls at my vets office are very compassionate, so I will take my baby there because I know they will treat her well.
I am glad that you found such a compassionate place for your Butterball. And it sounds like they have helped you in many ways. I am glad that Butternut is home with you. Lisa

You have raised an idea I have not had--not the part about what to do with pets when they die, but the prospect of having their individual ashes. We do not live in an area where we can bury our own pets--and when we have had dogs & cats put to sleep, we have had them cremated in common cremation. I don't mind not having their individual ashes, but I can certainly understand the comfort of bringing a loved pet "home."
My solace? I go looking for the departed pet's spirit in another animal!

Sherry at the Zoo said...

When we have a pet die we bury them in the back yard and decorate a pot to plant flowers in that we place on top of the grave. The trouble is, it's a small back yard and over the years we've buried everything from ferrets, to birds, to a huge iguana, to our beloved dog. It's getting to be a logistical nightmare making sure we dont' accidently run into a previous one. TMI...TMI... anyway, all that to say that your pictures make me think this may be the route to go in the future. Thanks for sharing on a difficult topic.

Nina, at first I thought for sure you would bury dear Annie on your vast property but remembering that she really was your daughter's companion it makes perfect sense.

Villa Girl, I'm sending good thoughts out to you and Lovey so that you will have much more time together.

Donna, yes, I had the same thoughts about communal cremation with my dog but in the end, wanted her back. And, Butterball, well, he was so special there was no doubt that I had to have him back. I certainly understand looking for your animal's spirit in another dog or cat but with my large herd still, I won't be able to look around for Butterball's (although I did find a year old Manx cat up for adoption at a shelter in Alexandria, VA! If I hadn't taken in so many strays I would be out the door today to adopt him)

Sherry, there is something special about a family's pet cemetary. If I had a nicer yard and dirt I could actually dig, instead of rock hard clay and actual ROCKS that I have to use a pick axe everytime I want to plant anything, I probably would have started my own little plot for my fur-family.

You were blessed to find such a caring organization to take care of Butterball's remains. His box is handsome and the plaque is so special. I'm sure it brings you solace to be able to keep him close.

We had our pets cremated except for one...Mini, a large Maine Coon who died in 1994. We buried her in the backyard - not knowing it was illegal in our county in MD.

That is a very nice box for your Butterball.

I also have my furkids cremated. With my last precious cat Georgia, I used a new place. When I went to get her ashes they threw a baggie on the counter. My heart broke...again.