I don't know when I started using that phrase but not a day went by without me saying "You're my main man Butterball". 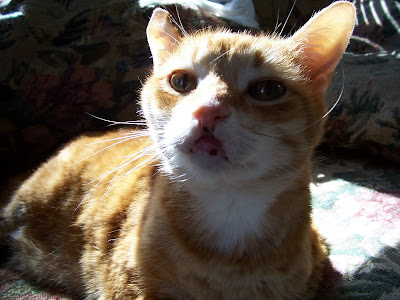 The death of Butterball has knocked the wind out of my sails. How can I come home to a house still full of cats and feel such a loneliness of spirit? I told a friend that the house feels rudderless. Instead of a cohesive family of cats headed by Butterball, it seems like a hodgepodge of mismatched strays. I am thankful that my routine stays the same with all the other cats to take care of, but when one jumps in my lap to be petted, I stroke them without much attention thinking to myself, “yes, you are sweet and you are mine and I love you, but you’re not Butterball.”

Butterball had such a quiet dignity without ever being full of himself. He never crowded around me to be petted like the other cats. He was content to stay out of the limelight knowing he would get my full attention when it was time for bed and again when I would get ready for work. That was “Butterball’s time” and I would have to push many cats away as we would spend our one-on-one time together. 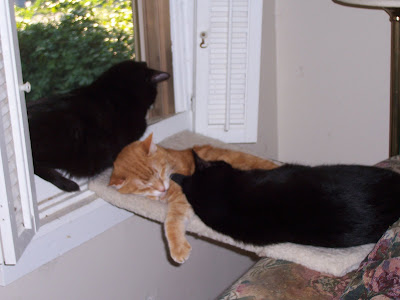 Butterball was a "cat magnet". All the other cats would seek him out when they wanted to take a snooze.
As some of you know, I adopted Butterball from the Animal Welfare League of Arlington back in 1996 when he was three. He was a purebred Manx and I must say that I’ve been smitten by the Manx breed ever since. In the late ‘90s, before I knew you could search online for Manx rescues, I even thought I would go back on my long-held belief of only getting rescued cats by going to a (gasp) Manx breeder. 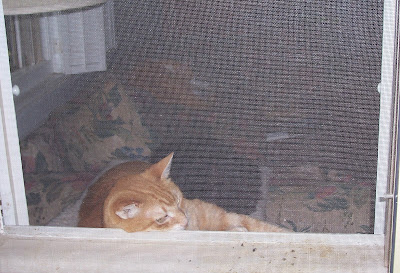 The Manx breed (or stubbin as they are called in the Manx Gaelic language) comes from the Isle of Man, off the coast of Ireland in the Irish Sea. (The fact that I had to have Butterball put down on St. Patrick’s Day made the whole experience even worse.) The breed has been around for at least 300 years. They believe the Manx’s lack of a tail came from a random mutant gene. Because of the isolation of the Isle, the mutant gene became the dominant gene. You can find four different variations on the Manx. The “rumpy” has absolutely no tail and has an indentation where the tail should be. The “rumpy riser” has a bit of cartilage that when you run your hand across its back, the cartilage will rise up like a tail. (Butterball was a rumpy riser.) Then you have the “stumpy” that has a tail an inch or two long—looks like a bobcat. Finally, you can have a “taily” with a normal length tail. Their hind legs are also noticeably longer then their front legs so when they run they have a hopping gait. That, combined with their small or no tail gave rise to the myth that the breed was a result of a cat breeding with a rabbit. Some still call them a “cabbit”!


Here''s a short video of a couple of weeks ago so you can see Butterball's rumpy riser and long back legs.
I found this description of the Manx temperament on the website “here kitty kitty kitty” and it describes Butterball to a T:
Temperament: The Manx's temperament is one of a kind. They are cool, calm and collected. Very rarely will they become angry like a standard cat. Friendly and affectionate, they are suited for just about everyone. Manx owners also refer to them as a "dog-cat" because of its strong desire to be with its people. Manx cats will follow you around the house, watching and learning everything you do. They are very inquisitive and therefore, are very intelligent creatures. Manx cats are protective of their homes and any unusual disturbance (even someone walking up the driveway) will cause a low growl much like a guard dog. Manx's are even known to chase after dogs that come into its property. The Manx are also well known for their "kissing" and constant head-butting if you put your head close enough. They will kiss corner walls, tables, chairs, shoes, their human family, just about anything with an edge. The head-butting is a sign of friendship, and sometimes they don't realise their own strength when doing so! As soon as you touch your Manx, give her a scratch on the head etc, it sends them into a purring frenzy and then the butting and kissing starts. They are very loving cats. Manx's make wonderful indoor cats, provided that they have plenty of toys to stimulate and exercise them in the house. When the cats' people are out at work all day, she will just curl up and go to sleep until they arrive home.
I never got a chance to see Butterball’s protective qualities when I lived in Arlington in a second-story walkup. So I was quite surprised when I moved into my house in Maryland in 1998. Butterball would be looking out the window and see someone walking up the sidewalk towards the house. He would get all huffy and puffy and emit this low growl. On another occasion, something woke me up one night but I couldn’t figure out what. I looked and saw Apu sound asleep but Butterball was sitting up keenly looking towards the side of the house and again emitting this low growl. You can imagine I was a bit frightened until I looked out and saw that a raccoon had knocked over my garbage can and was rummaging through it. 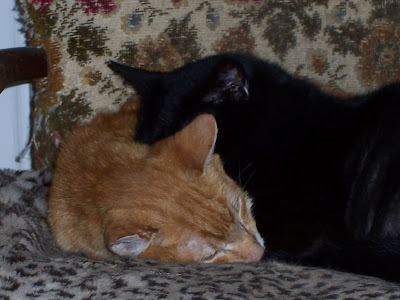 This photo brings tears to my eyes. I adopted Apu with Butterball in 1996. Butterball was 3 years old and Apu 4 months. Butterball has always been Apu's big brother and security blanket. Here they are sharing one last snuggle on Monday morning.

While all my cats are very loving, they have also at one time or another hissed or swiped at me. I mean, they are cats after all. But, in the 12 years I had him, Butterball never, ever hissed, growled or swiped at me. I even heard my vet talking to a vet assistant about Butterball. He mentioned what a great cat he was and that he could draw blood, poke and prod but Butterball never got upset. I have a sister who was visiting from Minnesota years ago. She is not a cat person at all. But she fell in love with Butterball and even picked him up to put him on her lap. She said she would get a cat if she could have Butterball.
When I would come home from work to find someone had yet again thrown up on my bed or urinated outside the litterbox or knocked over and broke a sentimental knick knack I would start fuming “I am SO tired of never being able to have ANYTHING nice. What is WRONG with all of you” as I huff around cleaning up whatever mess they made. By this time all the cats would have scattered to the four winds—under the bed, into the tv room or jumped out the cat door into my back porch. All, except Butterball. He would slowly pad his way to me, talking “ar, ar” then rubbing against me back and forth “kissing” me trying to calm me down. And he always did.
I honestly don’t know what I will do without him. 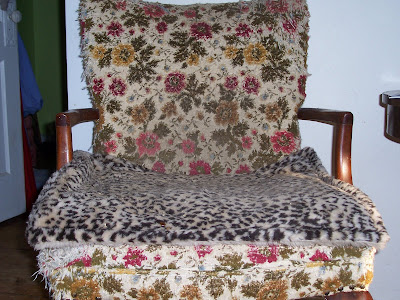 A very nice tribute to your Butterball. He was indeed a special and handsome cat. Even though Butterball is not with you in body, he will always be with you in spirit. Lisa

It is so hard, especially when your loved cat has such a wonderful personality.
We too have had cats leave us for the great mousing grounds in the sky and have ached for them afterwards. I still think of one cat who always settled down between my legs to sleep at night.
We get new cats, love them so much, but we never forget the cats who are no longer here.

Oh, you are making me cry. I love this post and your heart is breaking, I know... The empty chair, Butterballs's snuggle, and the video of such a calm, cool, and collected kitty. He's awesome.

I have ached for my cats who have gone, so I understand. The empty chair... Head-butting - we called them head bumps. I loved head bumps and the purring.

He was loved for a long time.

Sherry at the Zoo said...

What an awesome kitty. This was a great tribute to him...it almost makes me want to go adopt a manx (but since we already have 6 cats, I think we'll have to wait).

This is a lovely tribute to your friend. I've loved every animal that's come to my family but there have been special ones that leave such a big hole. How is Apu? Does he miss Butterball too?

Again, thanks so much for all the kind words. It means so much to me. It's good to be around pet folk. It's unfortunate that the people I work directly with are not animal people AT ALL. So it has been stressful being at work with people who just don't get it.

Lynne, I'm sure Apu misses Butterball. It is hard to tell at times...he is the polar opposite of Butterball, very skittish and a bit cranky. I've been trying to spend more time with him and he has been spending more time on my lap. I have noticed a few times he would walk past Butteball's chair and pause and look up to see if his buddy was there and then he would just move on. Last night I was playing the video of Butterball and Apu heard me call out Butterball's name and boy did his head pop up and look around.

Your wonderful tribute to Butterball has me in tears. What a sweet cat and wonderful pal he was to you. We also have a lot of cats, but like Butterball, only two are similar to Butterball in personality. They are all special to me, but those two are the ones I miss the most when we are away.
Sending you happy thoughts today to help you get through the grieving...

Okay, yet another gut wrenching realization. I don't know why I didn't think about it until last night. A ritual we used to have when I was getting ready for bed was for Butterball to "scratch" my back. Now, he was declawed* so I don't think it would work with normal cats. (*I absolutely abhor declawing and would never do it to any of my cats but Butterball came that way when he was adopted.)

I don't know how it ever got started but Butterball would love standing on my bed waiting for me to crawl into bed at night. Before I would put on my pjs, I'd sit on the side of the bed, tap my bare back with my hand and say "scratch mommy's back" and he would reach up and use my back like a scratching post. With no claws and just his pads and fur, it felt really good! Yes, I had a good cry after I realized last night...no more back scratches.

No more back scratches...but you'll never forget them.

I still miss a head bump from my cats when I'd say "goodnight".