Why It's a Sin to Kill a Mockingbird

Yesterday was the day I was determined to work in my yard. It was sunny and in the 80s (already too warm for my taste!). But, I didn't let the warm weather sway me and started pulling bramble and vines from my side yard. All the while being serenaded by Marcel the Mockingbird. He literally sang for hours sitting in the bramble. After about a half hour I thought, "I need to get this song recorded" and ran to get my camera. (Yet another excuse to stop the yard work ;-). It's not pretty to look at and you really can't see Marcel but he is in the gray bramble in the lower center of the video. But, oh listen to him sing! The video is over a minute and towards the end I especially like his robin and jay impersonation.

He just went on and on and on. I sure hope he finds a mate.

When I first moved into my house (it will be ten years on April 25!), the yard was just an overgrown jungle. But, before I moved in I saw a few daffodils and one lone red tulip trying to peek out from all the overgrown vines. After that first year the tulip never bloomed again. The leaves would come out and I would get my hopes up, but no flower. Last week as I was walking down the steps of my front porch something caught my eye 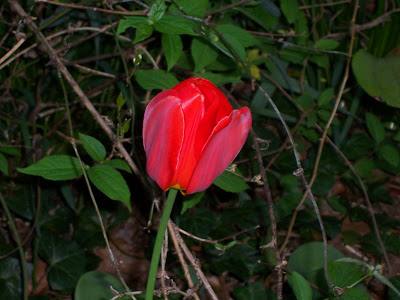 Here's hoping it's a sign of better times ahead.

Possumlady Place is still trying to find a new rhythm to its household without the big personalities of Butterball and Sunkist. All the other cats have done their best to help fill the void. It will just take time.

Oh, I almost forgot. Let me show you my latest purchase! Years ago I had heard that the Isle of Man had a Manx coin. I always thought to myself that one of these days I needed to get myself one. About a week after Butterball's death I went online to research it. Apparently, in 1988 the Isle of Man started a series of cat coins that goes on to this day. Every year they come out with a one crown coin with a different purebred cat. It has been wildly popular. Of course, to start out the series they had the Manx cat as their first. This is what arrived in the mail yesterday 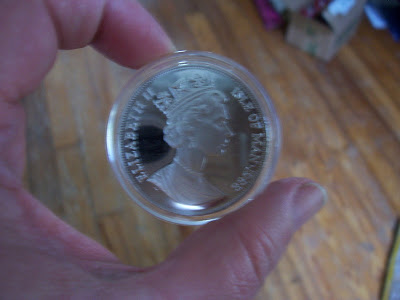 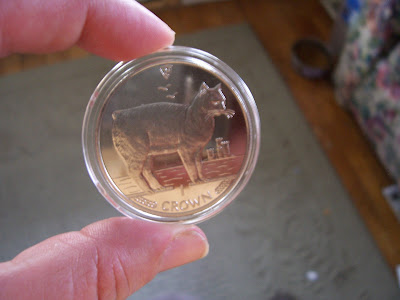 I was SO excited to get it. And look! The cat is a rumpy riser just like Butterball. I've put it next to Butterball's remains in a place of prominence in my living room 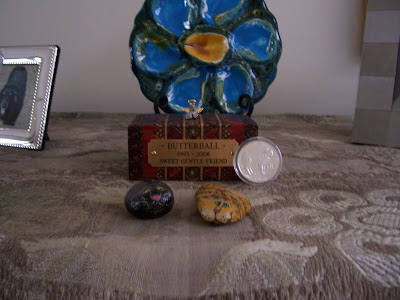 Don't you love the little cat stones! My sister Michele gave them to me when I first adopted Butterball and Apu.

Ahh, today is more my cup of tea. A soft rain outside with temps in the upper 50s. Great cleaning up the house weather.

Have a great week everyone.

Hi! I played your video Marcel the Mocking Bird. My cat was in the kitchen eating her breakfast and came running with the funniest look on her face. She kept looking around trying to figure out where the bird was and how did it get into the house.
I love tulips also, but don't have any luck with them.
I'm with you on with the weather. Yesterday here in good old Cape May County it was in the high
70's. Today in the 60's. 50's and 60's is my kind of weather.
Well enjoy your day today. Lisa

I don't know what it is about Mockingbirds..we have one that seems to like to be around us. Actually stays close and "follows" as I walk the trails. (or at least his call is noticeable the entire time!)
It almost makes me wonder if the singing is intended for me!

And I love the rock kitties--I've seen instructions for them in art books--and, as a stone collector, I often "see" creatures in their shapes. I used to have a very large one I used as a door stop to my bedroom as a child. Woke up one night, broke my toe on it on the way to the bathroom--hadn't thought about it since!
Desktop models have their advantages!

Great mockingbird solo. I do love them too.
I love the look of the bramble--lucky you; I am sure it is heaven for birds.
Cat stones--too cool.
I am sure the right cat will find you soon! My firm belief--when a loved pet leaves us, another one finds us soon.

For a long time I had one Mockingbird who fixated on me, bullied the other birds, and sang so beautifully when I was near. It's amazing how close they will come, isn't it? When you can see his pupil?

Now I have two pairs with a variety of singing and their constant hissing at each other. I'd miss them if they left.

Your Butterball memorial just makes me melt. It's so hard to be in the house without them, I know. Everything reminds you of them? After I lost a Cocker Spaniel many years ago, I could still hear her collar jingle around the house. I swear it's true.

Lisa, that's so funny! One of my cats, Sweet Pea, was also staring at my laptop when I replayed Marcel.

Nina, I'm so glad you said that about Mockingbirds. Marcel also follows me around. Even if I walk down the sidewalk to visit a neighbor he will sometimes come along. I always talk to him and he'll cock his head sideways to get a good look at me. I've seen instructions for painting the rock kitties also! Have never tried it though. Wow, just stubbing my toe hurts like heck, I can't imagine breaking it--OUCH!

So Donna, you love my bramble? Yes, the birds do love it. I call it the bird's condos. It's Greenbriar with horrible thorns and does have a tendency to take over everything in my yard!

Mary, I know what you mean regarding seeing the Mockingbird's pupil! They do have a tendency to cock their heads and look at you with their beady little eyes don't they? Glad you like Butterball's little memorial area. It's interesting that the chair that was Butterball's favorite was also a favorite to many of the other cats and I would have to push many a cat off the chair so Butterball could sit there. Now that he is gone, the chair remains empty and it does hurt to look at it without my main man curled up in it.

Hi there Possum Lady. i found you over at a life of many cats - I have 5 cats and I just love reading about other cat stories and seeing their antics on videos. I am so sorry about Sunkist and Butterball. I can almost feel your sadness.
I live in Australia - a long way from DC but in some ways we are all connected in the English-speaking world. If you check my profile, you can see who I am because I just started a blog today!
Nice to meet you anyway. hope you don't mind if I pop in from time to time to say hello. We're a friendly lot, down under.

Welcome to Possumlady Place Mmebenaut! My first overseas comment, how exciting! Also welcome to the world of blogging. Australia and New Zealand are definitely places I'd love to visit one day.

Thanks for your comment on Butterball and Sunkist. Sometimes as I sit at my computer at home I'm overwhelmed at the quietness of the house now. I try to think rationally that neither Butterball nor Sunkist were vocal cats and there are still a number of cats lounging around at any given time. It's just that they had such a large presence in my tiny home that without them there is a stillness in the air that no amount of cats can fill. Okay, don't mean to get sad again. I'll pop over to your blog to say hey.

The video and the sound of the mockingbird made my heart sing!! I was in Sedona recently and each morningI would rise early and go birding..and just loved the sounds of the early risers!! Love your site!! A fellow Nature lover and Blog Network participant NG