Flower Mart and a Shout Out!

I just realized I'm going to talk about a flower mart without any photos of flowers! Oh well.
One of the jewels of Washington, DC is the National Cathedral. Make sure the next time you visit to put the Cathedral on your list. It is an Episcopalian church with its own parish community but the community shares it with the nation as it is named the Nation's Cathedral. I LOVE this church and its surrounding gardens. This Church is a uniter in every sense of the word. They bring in wonderful speakers such as Desmond Tutu and the Dalai Lama. 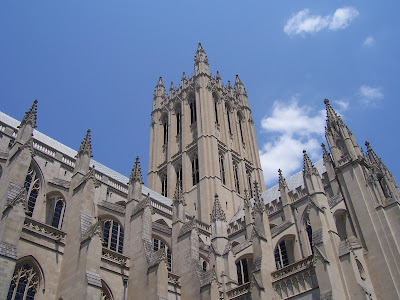 Most former Presidents have their funeral service here as well as services for major events like right after 9/11.
There is a wonderful little book that was published years ago called "A Soul in Balance: The Gardens of Washington National Cathedral." The introduction states that early designers and supporters of the Cathedral "foresaw the creation of gardens suitable for a fourteenth century Gothic cathedral: ancient, walled gardens appealing to the five senses, filled with plants of historic interest, plants of biblical myth and legend, and native plants. Tranquil, permanent, and timeless; hallowed yet real, set in the midst of a bustling capital city."
Every spring the guardians of the Cathedral gardens, the All Hallows Guild, put on a Flower Mart festival to raise funds for the upkeep of the Cathedral close. The Cathedral is a quick ten minute drive from my house, so my sister and I have made it a tradition to attend almost every year for close to 10 years. 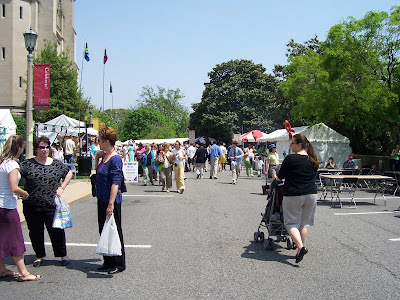 The festival is always on a Friday and Saturday. We have always gone on Saturday and, while fun, it is extremely crowded. This year with my sister recently retired I decided to take the day off and go on Friday. The crowds weren't nearly as bad. They have plant and herbs for sale as well as wonderful crafts and delicious food.
Every year the festival showcases a different country. This year was South Africa 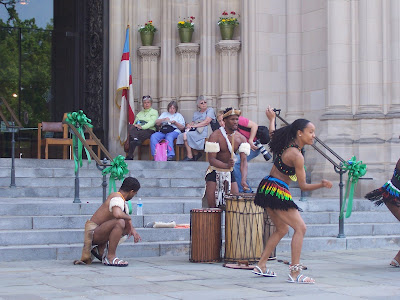 As soon as I saw this group dancing I thought they were performing a Zulu dance. 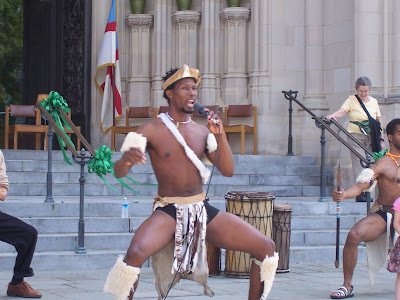 And I was right! Sometimes I amaze myself! 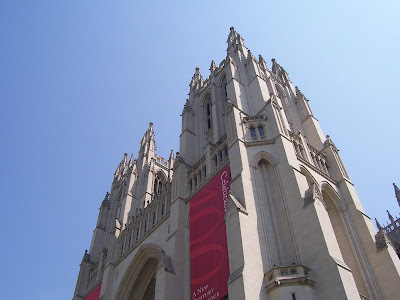 It got up to the mid-80s on Friday so my sister and I were quite hot when we returned home. I had told her about my latest discovery--Edy's Coconut Creme fruit bars. If you love coconut, these are heaven. 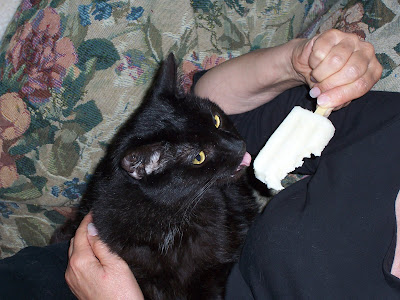 They're even "Woody approved"!
*****************************************
Now onto the Shout-out! I just need to publicly state how much I love and appreciate cartoonist Patrick McDonnell. He created the comic strip "Mutts" about the adventures of a dog, "Earl" and a cat "Mooch". The comic strip is a delight. I even named one of my strays Moochie. But the thing I admire most about Patrick McDonnell is his commitment to the environment, animal welfare, and especially the plight of shelter animals. Every year he devotes a few weeks to telling shelter stories. Now, I don't know if I will get in trouble for copying this cartoon here, but I just wanted to share it with those who may not get his comic in your paper...

A few years ago he was on a discussion chat sponsored by The Washington Post. I wrote in telling him how much I appreciated his work and asked him if he could write about the plight of older animals that always seem to get overlooked at shelters. He wrote back thanking me for my volunteer work and said he would definitely work different animals into his shelter stories. And, he was true to his word...

I could not have said it better myself.

Donna, somehow I knew you would have visited the National Cathedral! And, singing there too? What an honor! It's too bad you're not around here this weekend. Swiss lighting artist Gerry Hofstetter is lighting the outside of the Cathedral with numerous vivid images. It's called Lighting to Unite and its part of the Cathedral's "mission of reconciliation, spotlighting its role as a spiritual beacon for the nation, proclaiming hope for all humankind."

I loved that West Wing episode too. But don't get me started on the traffic nightmares they created!