A few years ago I bought two small blueberry bushes. Before I bought them I looked up blueberry bushes and found they have pretty spring flowers, then blueberries (for the birds), then beautiful red leaves in fall. You needed to get two different species of blueberries for best results. I planted them and they never really took off--pretty spindly and few berries. Then, one died. I've kept the one lone bush but it was clearly lonely and not doing well. It did produce blueberries but only one little cluster of about 6 or 8 berries a year that the mockingbirds got always a few days before they were ripe.

In April, my friend and neighbor Stephanie surprised me with a blueberry bush in honor of Butterball. I have yet to plant it but I put it right next to my lone blueberry bush and exciting things started to happen! Bees were coming by and I watched as they would fly between the two bushes pollinating each one. My one lonely little bush produced many more leaves and flowers. Here, take a look for yourself... 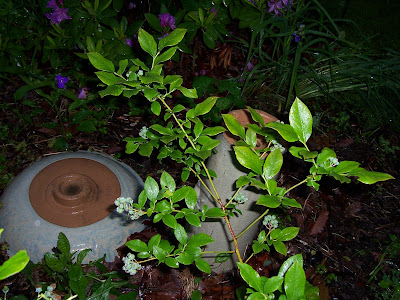 I know it still looks spindly but it has at least 7 clusters of berries. Maybe I might even get to taste a few this year before the catbirds and mockingbirds get them all. I've named this plant Sunkist. 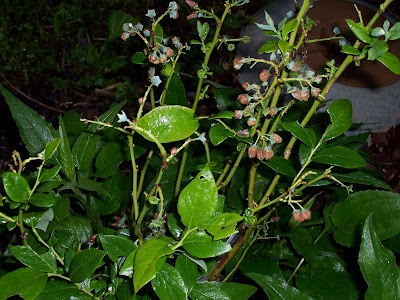 It has been two months on Saturday since Butterball left me. I've been under so much stress at work lately and this time of year the yard is growing out of control. It ain't easy being a single homeowner with a good-sized yard. I really think the reason I've not been able to shake this stress is that my main man is no longer around to calm me down. The rest of the cats, God bless 'em, can be a constant source of stress with all their allergies and issues with one another. I told a co-worker that as much as I love my other cats, it is always like they are saying "Feed me, play with me, love me, leave me alone, let me out, let me back in, would it hurt you to clean the litterbox?" With Butterball it was as if he would look at me and say "What's wrong mom, you look a little stressed. What can I do for you?" Oh, I still miss him something awful. 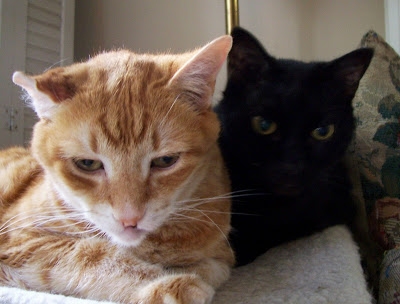 Butterball and Apu just hangin out

I'll bet that blueberry bush will produces berries by the buckets!

I hope they'll be as sweet as your Butterball.

Sometimes there is a special pet who puts their owners on a pedestal. Butterball was intuitive and I understand your grief...

"Feed me, play with me, love me, leave me alone, let me out, let me back in, would it hurt you to clean the litterbox?"

I'm hammered, too, by two demanding BTs every day. But they don't care about CLEAN.

I'm so glad your lonely blueberry bush now has a companion. Sounds like you need another sweet, gentle, non-demanding cat. Could you tell that Butterball was going to be that way when you first met him? cat59

Hi all, thanks for the good wishes. I've started putting out grapes for the catbirds and they have found them and are eating them up. So hopefully, I've taken their attention off of the blueberry bushes as the berries are getting plumper by the day!

The poor guy was in a strange place with a strange person shoving nasting antibiotics down his throat twice a day, along with cold ear mite drops in his ears, jelly-like ointment in his eyes and drops up his nose!! He did cry out a number of times but was never aggressive or hissy.

In fact, within that same time period, little baby Apu got into some ribbon. I caught him and had to hold him while pulling a LARGE amount of ribbon out of him. He was frantic and crying out. Butterball rushed over and started licking Apu and Apu immediately calmed down. Yes, a sweet old soul from the beginning.