Sorry yet again for the long delay in posts. With me being up to my eyeballs in paper at work and staring at a computer screen all day long, the most I’ve been able to do at night is read a few blogs and leave even fewer comments. On top of that the heat and humidity of the summer has arrived in full force for the weekend. Temps in the mid to upper 90s and high humidity. I just find myself very depressed during this kind of weather and if I’m not working, don’t feel like doing much of anything.

Hmmm, I wasn’t expecting that to come out so negative considering I have a cute wildlife video for your perusal! You have met Willy Mo, one of the many raccoons who come by the Possumlady Outdoor Cafe, now meet…..Little Mo. Little Mo is new to my wildlife menagerie. I have three other possums that come around—Daisy, Simon, and Twinkle Toes. Little Mo started appearing around March. Hope you’re not bored with the video as it is over a minute of just watching him eat, but he is just so cute! I don’t understand people who think possums are ugly. They are so timid too and do no damage around the house and help eat up insects and grubs. Though I think my possums probably think they’re a little too high class for that now after gorging on expensive Science Diet cat kibble, along with the occasional grape for dessert.

The video was taken around 8:00 one evening when I was surprised to see him out in the daylight. But 8:00 is his usual feeding time, in darkness or daylight. You will see him scoot into a cat shelter my neighbor brought over. The cats will go into it if it starts storming out, but it really has been taken over by the possums at night. I don’t know where they go during the day as I’ve opened it up on several occasions during the day and no possums.


Speaking of storms, we had a hellish one on Wednesday afternoon. Tornados were spotted around the DC area (which is very rare). The wife of my boss called to say that a huge neighbor’s tree had fallen on her car and crushed it and also damaged my boss’s house. He lives in Takoma Park too so I was quick on the phone to my neighbor and luckily there was no damage to my house or the block.

I’m writing this on a late lunch break as I know I’ll be too tired when I get home to post anything. Wish me luck though! I’ll be turning on the AC for the first time this season when I get home and fingers crossed, I hope it works!!

Update: Well, I'm finally posting this on Saturday morning. The AC works!! Woke up and wasn't even able to open the windows for a bit this morning as outside is already unbearably humid and sticky--yuk! The inside cats are not happy. Their usual perch in the windowsill is no more until the heatwave breaks late next week. Who ARE all these people that crave summer!! Do you LIKE sweating and having no energy? I just don't get it. 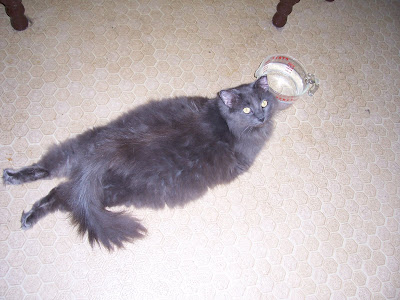 Sweet Pea trying to cool his ample stomach on the kitchen floor. Hmmm, maybe I should give that a try!!

Hi! I am not a possum fan, but he is cute. Our weather here in Cape May County has been pretty good until today. It got hot and humid. Tomorrow it is supposed to be 96 degrees. I think people that love summer and bake themselves in the sun are nuts. Lisa

The humidity is hear in Minnesota but it's been cooler due to a week of redeveloping rain storms and clouds. I HATE the heat and humidity of summer but live for the odd days that bring cooler, drier weather.
Loved your possum video. I think they're cute too.
Stay cool!

I think we're all battling the same muggy wave. Just turned our air on yesterday--couldn't stand it one more minute!

I spent some time watching one last week, while I was sitting in the barn with mama kitty. It made her very nervous, though, stumbling around through the debris.
I suppose she was concerned he'd discover the kittens. But he seemed oblivious to the fact they or I was there.

He is so sweet and I love that he went straight into his box after eating. This type of video is so rare.
As for the heat - I love it and we regularly have over 100 degrees but we are blessed with low humidity in the summer, being so far south. Cities like Sydney and Brisbane have quite unbearable humidity in the Summer.
The low humidity also seems to help with control of fleas in the cats - that and very cool nights. We are lucky.