Thanks Lynne and Lisa for your thoughts and prayers. In a way, Lynne, it was a quick and simple solution in the end. Before the vet even checked out Greybeard's leg he did a quick check of his mouth and found a very aggressive oral tumor under his tongue in a place I had never noticed before. That combined with the fact that he had a broken shoulder made the decision pretty fast. Apparently, the break severed nerves in his leg so he was not in any pain. The only alternative would have been to amputate, which the vet said, even considering his age (he estimated Greybeard to be around 15) could be doable. But considering the cancerous tumor, my vet said it would probably be a matter of months before that claimed Greybeard's life.

I was so shocked that his leg was broken. Greybeard NEVER even would go near the street, not even the sidewalk next to the street. He was always either on the porch or on the sidewalk that was on the side of the house, or on the back deck. The vet said there didn't appear to be any other trauma that would indicate he was hit by a car so he thinks just his advanced age and the cancer contributed to brittle bones and he could have just lost his balance and fell from the deck. Update: I noticed on Monday morning that my big beautiful hosta that was just getting ready to bloom had all its blooms bit off. Deer have been reported across the street in the woods but I guess they have come across the street into my yard. I'm thinking now, more and more that Greybeard could have been either stepped on or kicked by a deer sometime late Sunday night or early Monday morning.

I came home from work to get Greybeard and just had a feeling about how things would go, so I gave him an entire jar of turkey baby food before we left. I always split a jar of baby food among the 3 indoor cats as a treat every evening. If Greybeard is in the house, he gets to lick out the jar. He absolutely adored baby food. If you could have seen his face when I put down the bowl in front of him filled with an entire jar! His eyes just lit up. He was about half way through when he stopped to lick his chops, purring the entire time and looking at me with such love.

I was so apprehensive taking him in as I had no idea how he would react at the vets. He was a cantankerous old thing. The drive over was hard with him howling the entire way. But, when he was let out of the carrier he was surprisingly calm and the vet was able to handle him easily. When I put my face down to his he immediately starting purring and that is how he went to sleep.

So, Goodnight and Goodbye Greybeard. I only knew you for three years yet it was an honor and a privilege to know you and love you. How scary and hard your life was before you found your way to my house, I'll never know. It must have been pretty bad since it took you an entire year to let your guard down and let me pet you. But once you trusted me you gave me your heart and soul, no questions asked. You can read the history about how Greybeard came to my house here 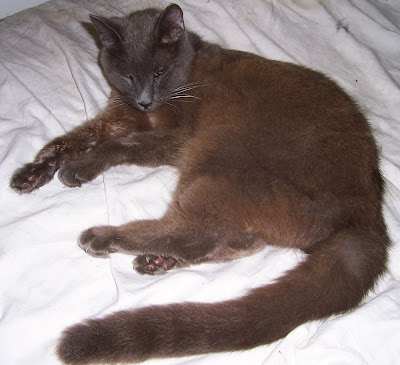 I'm very sorry for your loss of your friend Greybeard. You'll never know what his life was like before you knew him but it was full of love and acceptance once he found you. You gained his trust and did right by him to the end. That is a true friend.

I stumbled upon your blog and just wanted to say I am sorry for your loss. Animals come into our lives and bring joy and teach us patience and sometimes they teach us to do that right thing.Now you've returned that favor.

One question. How did you get the ASPCA donation button on your blog. I couldn't find any information about it on the website.

my email is RBrandt87 at gmail dot com

Oh goodness...how do you bear it?
What a sweetie Greybeard was...I have one like him too. I can't even begin to know what you must be going through. You were his St. Francis...now he's your guardian angel. Biggest hugs to you!

Oh Christine--tears in my eyes. Another dear cat soul has left.
What a treasure Greybeard was, and your love for him (and his for you) so touching.

I am very sorry for your loss. Take comfort in knowing that you had made Greybeard's last three years his best. Without you, he may not have had three years. I believe that things happen for a reason. And I guess the reason he found you is for the best three years of his life and when the time came, he wasn't alone and was with someone who loved him and he loved back. Take care of yourself. Lisa

Thanks everyone. It's been four days and I still look for Greybeard in his usual sleeping spots. As frustrating as he was with his thinking the entire house was his litter box, he was still such an affectionate cat.

I've never had a cat that really liked being picked up. All my cats just basically tolerate it. When I pick them up they get stiff and can't wait for me to put them down again. Greybeard though loved being picked up. In fact, everytime I did he would go limp and immediately start purring.

When I told my vet the story of Greybeard he said "that ol guy won the jackpot when he found your house" I'd say we both won.

Rachel, thanks so much for visiting. I wish I could tell you how I put the ASPCA on my blog but it's been over a year and I just can't remember. In fact, I never really wanted a donation page, I just wanted a banner about the ASPCA. I'll go into my dashboard and see if I can see what the hidden commands are.

Sorry to hear about your beautiful cat. I had to give up a cat to another family when I moved, and I know how devestating it can be to lose one.

I am at a loss for words.

"When I put my face down to his he immediately starting purring and that is how he went to sleep."

This is too much.

I am just so sad. You have had to endure too much loss lately. I love what "Ramblings of a Villa Girl" said. There is nothing I can add to that. I hope you can take a break soon. Some kind of restorative retreat would be good. Can't believe the Board book is now 350 pages! Is there really that much to talk about?! Cat59

I am finally visiting your blog and felt my heart go out to you when I read about Greybeard. I am so glad you two had the time together that you did and that you were able to let him go, knowing you were making the kindest decision. Hope your memories of him give you comfort in your loss.

I've never read your blog before. This was so touching. I guess most of us have lost a beloved pet and might know what you were going through. They become "family" and it's hard to say goodbye.