So it doesn't have the same ring as "fluffy, furry Friday" but I actually FELT like blogging tonight. Go figure.

Let's see....who shall we write about tonight. Hmmm, how about Greybeard. Yes, Greybeard it is. 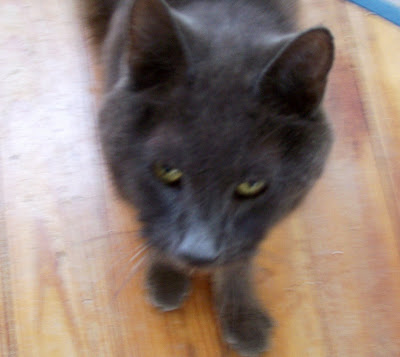 My name is Greybeard. Fear my pee*

*To be explained later.

Early January of 2005 was pretty mild. I remember grilling on New Year's Eve. Windows and doors were open and I was at the end of my 2 week break from work and running over to my local animal shelter helping out during the day. Every once in a while I would catch a flash of gray (grey?) in the back yard. Oh, great, I thought...another cat. I immediately called my neighbor thinking it was one of hers but, unfortunately, it wasn't. When I could get more then a glimpse I could tell it was quite a thin cat and he looked old. If he saw me though, he would bolt. He clearly tried to stay away from the other cats but with food and water on the front porch he really had no choice. I would see him wolfing down food only to (again) catch me looking at him from behind the storm door and he would hiss and run off.

Then we had a cold snap with a snowstorm predicted on a Saturday in mid-January. I got up really early and by 7:00 a few flakes were already falling. When I got in my car to run my errands around 8:00 I saw the gray cat crawling out of my window well. Oh, I felt so bad. It was really cold the night before and all he had were a few leaves in a window well to keep him warm. Off to Petsmart!! I bought a small insulated dog house and a big fluffy cat bed to go inside, brought it home and put it right next to the window well out of the wind and snow. And, just as an added incentive, sprinkled some catnip inside. Next day I saw little cat footprints all around it. That made me feel better. I just hope it was the gray cat using the house.

Winter gave way to spring and I was out in the yard a lot doing spring clean up. I would see the gray cat sitting far away, but he was watching me. If I stood up and looked at him though, he would hiss and run away. So, I named him-- Greybeard. Spring gave way to Summer and it got to the point where he would no longer run off the porch if he saw me watching him. Then, I started walking out the door on the front porch. It took a few weeks but he no longer ran away when I was actually ON the front porch just a few feet away from him. Then he let me put some tasty wet cat food down in front of him. He would start eating and I slowly moved to pet his head. He would stop eating, hiss, then continue to eat. This went on through September when it got to the point where I could sit crossleg on the floor of the porch with him laying a few feet from me. Then, one night in October as I sat crossleg on the porch floor, Greybeard walked over to me and started purring and rubbing up against me. My heart skipped a beat! THEN, he actually crawled in my lap, curled up and just looked up at me, purring the entire time. Tears were streaming down my face as I thought of this poor cat who obviously was not feral, going without any kind of love or affection for so long. After that night, I could basically do anything with him--pick him up, lay him on his back, carry him around, (check his little dodads to make sure he was neutered), with Greybeard just purring his little heart out giving me his complete and utter trust. 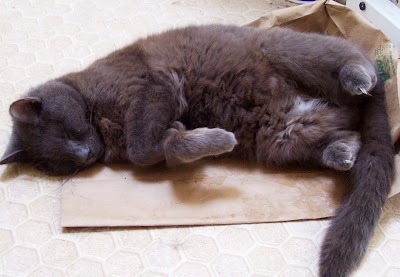 In December of 2005 we had an early winter. The first week was cold and sleety. I had little igloos on the front porch for the cats but Greybeard would not go in them. I would come home from work and he would be covered in snow, sitting on the front porch waiting for me. I never wanted to bring him inside because as loving and trusting that he was with me, he was the exact opposite with any cat. Hissing and lashing out if a cat got a little too close to him. But, I tried. I had to keep an eye on him but he SO wanted to be inside that it seemed like he was tolerating the cats more easily.

BUT, Greybeard has a major problem. He is old and mostly deaf. He is also incontinent. It's not like he sprays to mark his territory. He just walks to a place, squats and pees. He uses the litter box about half the time. The summer I just don't let him in except for a few hours after I come home from work. But, when it's time for bed, I have to put him back outside. This past Friday night he was curled up and looked SO peaceful I gave in and let him sleep and went to bed myself. I woke on Saturday and noticed Greybeard was no where to be found. That's odd, he is usually either in the kitchen or living room. Then, I noticed the light on my phone was out so I check the power strip that I had it plugged into. The power strip also has a light and that light was off. I picked it up and urine came pouring out of it. GREYBEARD!!!!! Oh, I was mad. Then, I thought, oh my God, what if he got electrocuted and dragged himself somewhere to die. But, I found him under my bed acting like nothing was wrong. He has been outside ever since. I just talked to my neighbor and when it gets too cold for him to be out, she will let me borrow one of her caged cat condos where I can put a litter box on the bottom and has a couple of ledges for him to sleep and a place for food and water. Yea, like I have the space for that. But, you gotta do what you gotta do. 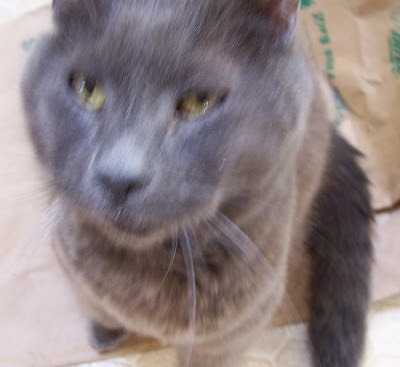 What? Is there a problem?

You have such patience and tolerance for cats, it's very touching. The story of Greybeard does bring a tear to my eye. I was wondering if you could crate him during the night like some people do with dogs. Your neighbor's cat condo thing sounds purrfect. (couldn't resist) You don't need much room for yourself in the house, do you?

I don't think a dog crate would work. It would have to be big enough for a litter box (cats, and especially Greybeard, don't know the meaning of holding it in!) Honestly, except for the size, I think it will be good for everyone as all the cats have to tip toe around Greybeard and I think he would feel protected in it.

He looks exactly like a cat we had when I was a child. His name was "Cotton". He contacted rabies from a bite on his neck and animal control took him away from us. A memory I hate to relive.

Your story brought tears to my eyes. You obviously have a big heart, Possumlady. I wish the best for Greybeard.

Hi! Thanks for your comment on my blog and your experience with Greybeard is a lot like my experience with Oliver! Only Oliver is more intentional about where he leaves his urine! I love how patient you were with him and giving him a heated home and a chance at love. With every friendly cat I rescue from the street, it breaks my heart to know they went long periods of time without human touch and loves. Poor things. Thanks for doing the rescuing you do and making a difference in the lives of each kitty that enters your life!