Happy Day of the Dead everyone! 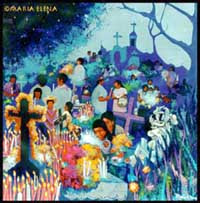 (I wrote this on the evening of October 31 but saved it as a draft to print on November 1 but blogger still dated it October 31! Day of the Dead is celebrated November 1-2.)

This holiday means a great deal to me. After my friend Paul was killed in July of 1992, everyone just kind of went their own way. We were all in a fog of grief. In the fall of 1992 a few friends and I were trying to think of a way to get all his friends together again. I had just recently heard of the celebration Dia de los Muertos and suggested that. A couple of friends balked thinking people would not understand and might think it was in bad taste. Harummph, I thought. I went to the local library (remember this was BEFORE the internet) and researched the Day of the Dead. I went back to my friends saying we absolutely HAVE to have a Dia de los Muertos party to honor and celebrate Paul's life (it didn't hurt that Paul was Hispanic--or as he liked to refer to himself "hipspanic"). Everyone agreed and the work began.
I wrote up the invitations and then we went to work making the decorations. Oh it was so much fun. You have to understand that it had just been over 3 months since Paul was killed. Three months seems to be the time in the grief cycle when you are just realizing that you will never ever see that person again. Before that it was easy to think "oh, he's just on vacation, or he's on a business trip". Three months unfortunately, also seems to be the time when most everyone else not dealing with the grief seems to think you should be getting back to your normal self. I'm just sayin it was a hard, hard time.
We got paints and plastic skulls and made papier mache skulls and crosses. This filled our weekends. Below are some of the photos I dug out from the party. 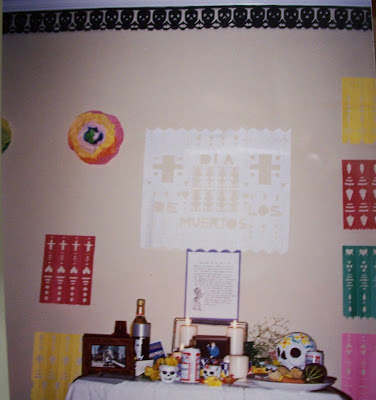 Here is a photo of the altar where we had photos of Paul, some personal items of his, a glass of water to quench his thirst on his trip back to our world and a plate of some of his favorite foods. 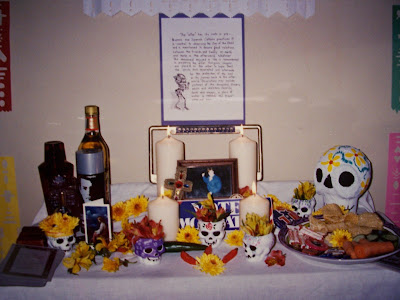 Here is a close up of the altar. You can't see but there is a VOTE DEMOCRAT bumper sticker! Yes, he did have some weird food favs including carrots, cucumbers, fried pork rinds, and smarties. 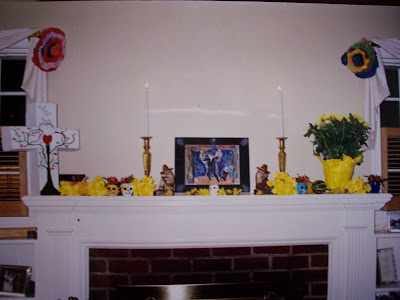 The decorated mantel filled with marigolds. Marigolds are very important in Dia de los Muertos. They have a very pungent smell that mexicans liken to the smell of death. I made and painted the cross (I was also going through a Frida Kahlo period ;-)) and the painting in the middle. I titled it "The Dance of Death". 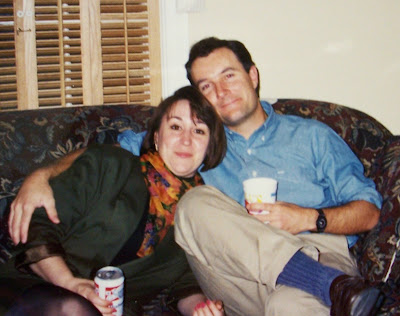 Here I am with friend Chris N. at the end of a very successful party. Chris and his wife Susan drove all the way up from the Gulf Shores of Alabama to come to the party. Chris's family has a fishing business and they brought up a boat load of shrimp for the party. I don't think I ever ate so much shrimp in my life!! Many tears were shed at the party but the laughter and dancing far outweighed the tears. Paul would have loved it. He did love it.

Oh this makes so much more sense than Hallowe'en. Of course, Hallowe'en actually precedes All Saints' Day, and it seems to me that Dia de Los Muertos is just another way to celebrate saints, including Paul.

Thanks for the reminiscence.

Possumlady, I remember reading of the fine man, Paul. This is another wonderful tribute to his life. Very good and kind. He's loving you for it.