I've been a supporter and volunteer of the Washington Animal Rescue League (WARL) since 2002. They are literally a 2-minute drive from my house. I've been a cat socializer and a dog walker. I've contributed money, food, toys, pet beds, blankets, dog coats, and towels over the years. In fact, I'm working hard to pay off my house in order to be able to work there in about 10 years. (I'd be working there now, but even the best animals shelters don't pay enough for me to pay the bills.)

WARL has gone through a multi-million dollar renovation and is one of the most progressive shelters in the country. They have been getting a lot of much deserved and much needed press lately. The latest was an article in USA Today last week that I'm reprinting here, although I do have to make one correction to the article. They state that New Age music is piped in. Actually, it's classical music:

***********************
In D.C., a serene shelter for homeless pets
The Washington Animal Rescue League's shelter was designed from the animal's point of view to promote physical, mental and social healing. This pet is enjoying one of the "cat condos." 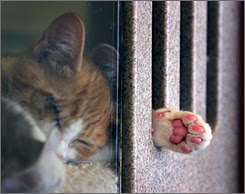 Sharon Peters, Special for USA TODAY
WASHINGTON — Water cascades soothingly over the skylights. New Age music is piped in. Radiant heat oozing up from the floors and memory-foam Murphy beds that drop down from the wall ensure that the residents suffer no unnecessary discomfort.
Life is serene for the 270 homeless dogs and cats lounging about the adoption arenas of the Washington Animal Rescue League, a recently renovated animal shelter that has spurned convention by elevating the temporary care, housing and rehabilitation of rejected pets to an entirely new level.
"Whatever circumstances landed them in a shelter" — whether they were strays, abandoned, turned over by terminally ill owners or rescued from inhumane conditions — "was traumatic for them," says Scotlund Haisley, the executive director who persuaded his board to support a $4 million renovation. Every detail is intended not to pamper animals "but to simply respond to their basic needs" during the time when they have no home, no family and no ability to see or hope beyond the present.
"The traditional model of animal shelters not only doesn't meet the animals' needs, it works against them," he says. Features that might stress animals and cause them to spiral into attitudes and behaviors that would make them unattractive to potential adopters, from cages and chain-link to insufficient contact with humans and animals, were rejected.
Dogs are assigned, usually in pairs, to glass-block "dens" with clear-glass Dutch doors on top that any visitor can open to offer a pat. Cats get glass-fronted units, each with its own private litter-box area as well as an aperture that allows sociable felines to visit kitty neighbors. There are multiple play areas for dogs and for cats; a perpetual waterfall for cats seeking a running-water drink; and an innovative ventilation system that has essentially eliminated pass-along infections common in shelters. 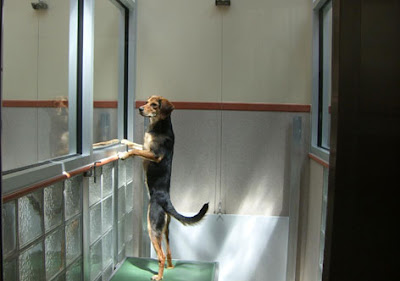 It has all resulted in calm, well-adjusted animals that act neither frantic nor depressed when visitors walk by, and an adoption rate Haisley says is on track to be three times higher than before the renovation.

A new type of shelter
WARL is on the leading edge of a new generation of shelters aiming to overcome the stereotype of depressing repositories of sad, hopeless pets and increase adoptions. Among them:
•PAWS Chicago opened its brand-new adoption center, smack in the middle of upscale Lincoln Park, on Sept. 6 after four years of planning and fundraising. There are no cages. It features classical music, a fireplace and coffee bar in the reception area, a rooftop garden and natural light.
"We did our research and included everything we could think of that would de-stress the animals and also make this an inviting place for the public," says PAWS' Paula Fasseas, a banker who founded the group 10 years ago. PAWS Chicago had expected to place 1,700 animals this year, but the surge after the opening has put them on track to place as many as 4,000. "I hear every day from people who say, 'We've been wanting to adopt but couldn't go to a shelter because it was too sad,' " Fasseas says.
•At the Richmond, Va., SPCA, soothing shades of aqua, lavender and blue; classical music; spacious "catillions," where 10 or so felines live, climb and lounge in harmony and where would-be adopters enter to watch and play with them; and "townhouse rooms" where dogs relax in cozy surroundings and visitors can enter and hang out with them are among features contributing to a "steady increase in adoptions," chief executive officer Robin Starr says.
The place is so inviting, community people sometimes spend lunch hours there, even without intending to adopt, "and we love that," Starr says. "It's more people-contact for the animals."
Such new-wave shelters provide medical care for the animals they take in and also run large spay/neuter programs for pets in the community, providing thousands of free or low-cost sterilizations.
Most of Haisley's inspiration for WARL's renovation came from unconventional sources. After a holistic vet recommended harp music because it suggests running water, which animals find as relaxing as humans do, Haisley decided flowing water would be integral to the design. And when he was seeking ideas for reducing anxiety and aggression among a population not keen on confinement, he studied progressive prisons for humans.
The dog-enclosure design that allows visitors to reach in is unheard of in most shelters because of dog-bite concerns, but Haisley believes connecting with people keeps the dogs stable. No visitor has been bitten. "All these animals have been temperament-tested before we put them on the adoption floor," he says. But mainly, "they're just not in the high state of stress and anxiety that exists in most shelters," so unexpected aggression doesn't occur.
A model for the country
Shelter personnel from throughout the country are making pilgrimages to WARL to seek ideas for their own new buildings.
Officials from Montgomery County, Md., where design plans for a new, $12 million shelter were "pretty far along," visited WARL several weeks ago and have now decided to "go back to the drawing board to incorporate features we saw there," says Jennifer Hughes, special assistant to the County Executive.
Now that they've seen what's possible, "we are not going to build the same-old same-old," Hughes says. "Our feeling is if you do this right, you perform your mission much more effectively."
Posted by possumlady at 10/22/2007 10:41:00 AM

OH, this melts my heart. I'd be a horrible shelter employee. Not enough Kleenex for this girl.

Mary, I think you'd change your mind once you came and saw the shelter. It is a no-kill shelter so no worries about that. In fact, more and more people are having their children's birthday parties at the shelter! We provide pizza and drinks, and instead of gifts to the birthday child, donations are made in their name to the shelter. Then the kids are taken on a tour and end up making dog and kitty treats. When this was first reported in the local paper the shelter was innundated with requests for parties and had to hire someone to just coordinate these events!

This is wonderful. It is so encouraging to hear about these progressive animal shelters. The fact that they are encouraging more adoptions is just icing on the cake. Thanks for telling us about what a wonderful place your local shelter is.

What a great concept--a pet shelter that actually works for the pets.