Now, before you get turned off by the post title, I'm not blogging about the Iraq war. You have heard about donor fatique. It's what many nonprofits were talking about after the Tsunami and Katrina where good folks like you and I were becoming numb to all the causes that needed our time and money. Well now they are talking about "rage fatigue" where a great many people are becoming almost numb to the war in Iraq, along with the current Administration because of our constant anger over the senselessness of it all. I have rage fatigue.

But, I digress. The post will be just a quick talk about the current Ken Burns' film documentary on PBS entitled The War, about World War II. If you haven't seen it, you should. I felt like I had seen enough about World War II with all the movies out there and documentaries (remember the BBC series in the 70s, The World at War?) But in honor of my father who died in 1984 and served in WWII, I feel that I need to watch it. I've seen about 8 hours of the 15 hour documentary and some of the things I've heard and seen have really been eye opening. I keep thinking that it is nothing short of a miracle that my dad came home alive. Not only did he enlist as a Marine right after college graduation, but he served in the South Pacific. Watching the series where they focus for part of the program on the european invasion, then the south pacific, it gauls me that so many of the front line folks like my dad were basically sent out like lambs to the slaughter. Tens of thousands were killed trying to take those little islands, with VERY little training and very little equipment and supplies. My dad basically never talked about his time over there. He did tell two stories though. One was when they were dropped off in the surf and had to wade to shore being contantly shot at. Once they got ashore there was nowhere for them to go so they tried to dig fox holes for cover. Well, they were on coral islands so they could only dig down a few inches. He laid there all night watching the tracer bullets flying just a few inches over his head. The second story was, having enlisted after college, my dad was one of the older men out there fighting. He led companies to battle. One time they were in a fox hole and one of dad's men who was a cocky young guy, either 18 or 19, kept popping he head out of the foxhole yelling at the enemy. My dad kept yelling at him to keep down. The kid popped his head out again and my dad said in an instant, it just disappeared. How anyone can witness what they witnessed, then come back to get married and start families is beyond me.

But, that is just what my dad did. He was on leave in August of 1945 when he and my mom married on August 9th. So many people were getting married it was hard to find an available church. My parents were married at 7:30 in the morning! And, there was an 11:00 wedding waiting in the wings. 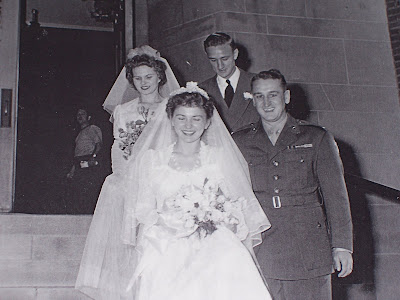 For the longest time I thought it was a double wedding, until I realized that my mom's maid of honor wore a veil also. Was that the style back then? My dad's best man was one of his brothers, my Uncle Andy. 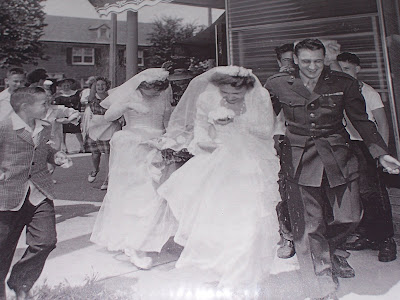 Thanks to my sister Becky, a few years ago she took my parent's wedding album and had all the photos copied and put into albums for each of us. 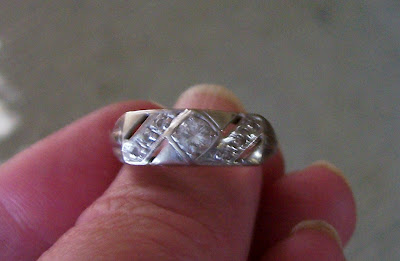 On his way home from the South Pacific to Minnesota, my dad stopped at the PX in Hawaii and bought my mom's engagement and wedding ring. On their 30th anniversary, my mom had the stone of her engagement ring put together with her wedding ring in a new design. Unfortunately, she wasn't real happy with how it came out. My mom died in 2005 and she left me her ring. I absolutely love it. It looks very art noveau'ish, very 20s. A friend once asked me if I ever take the ring off. "Only when I garden" I said, (pause for affect) "which basically means I never take it off!" 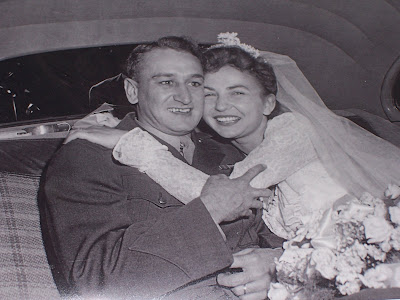 My absolute FAVORITE photo of my parents.

Oh, and the happy ending to the story is that while they were on their honeymoon, Japan surrendered and my dad never had to go back to war.

What a beautiful post! That's a wonderful happy ending. I also love the ring and am glad your mom left it to you. The photos are great. This post is really a nice tribute to your dad!

Thanks! Yes, a happy ending all around. My dad had four brothers and I believe, except for the youngest, they all went off to war and they all came back! As one of the soldiers said in the series, it didn't matter how well you were trained, how fast you were, it was just plain dumb luck if you survived.

I haven't signed on to watching The War, though I think I will try to get it on DVD to watch. The idea of sitting down at a specific time just doesn't work for me.

My Dad was in the South Pacific, too. The only thing he watched on TV were war documentaries - World at War, etc. He had a VCR collection of the wars and watched them repeatedly.

That's such a happy photo of your Mom and Dad. My parents were married in 1952 and I don't think the maid of honor wore a veil.