Ahh, the beginning of the new fall television season! Being a product of the tv-generation, I am a definite tv-aholic. I also think it has something to do with being single. I mean, come on, as much as I love my animals, stimulating conversationalists they are not. I am a news junkie, coming home to watch the local news, then two, sometimes three national news broadcasts. (Oh, and before anyone tsk, tsks me, I am also a passionate fan of the Washington Post and read it religiously every day--so there.)

All that said, the television pickings of the last few years have REALLY been dismal. I cannot stomach any kind of reality tv (sorry all you American Idol, Dancing with the Stars, Smarter than a 5th grader, Remember the Lyrics folks). I also cannot stomach any of the incredibly, obscenely gory CSI shows. Bones? Meh. House? Meh. Big, big, Twin Peaks fan (okay, so that was over 15 years ago). Also, I was a diehard Buffy the Vampire Slayer fan (hmm, okay that was over 3-4 years ago). I became hooked on LOST when it started, Six Feet Under (SFU) when it was rebroadcast on BRAVO (and I can say without a doubt that SFU had the most beautiful, emotional, poignant series finale of anything I have ever seen on tv). So without much out there now, I generally cruise the movie channels for old film noir.

I wasn't too excited about this season until I read a review yesterday of a new show called Reaper on the CW channel. I can't even remember how the CW channel came to be but I think it used to be the WB channel. Tom Shales of the Washington Post is a pretty harsh critic so when he likes something, I take notice. Part comedy, part drama (I think they're call dramedies now), the premise of the hour-long show is that a 20 year old slacker (on the eve of his 21st birthday) working at a huge home improvement store, meets up with the devil. Okay, stay with me here. For some reason, (sorry but I tuned in a 9:05 last night so I missed a crucial part) the slacker's parents sold his soul to the devil before he was even born and the devil was coming to collect on his 21st birthday. Now, we all know this premise is not new. "The Devil and Daniel Webster" anyone. And, if anyone remembers, there was a show on a few years ago called Brimstone with the exact same premise. And who can forget the classic Simpsons episode when Homer sells his soul to the devil for a doughnut! (mmmmm, forbidden doughnut.....aaaarrrggghhhh).

But the devil doesn't want the slacker's soul, he wants the slacker to help capture souls that have escaped from hell and are back living on earth doing really bad things. The slacker asks just how is he to go about doing this and the devil produces this sinister looking box that is smoking with gargoyles on it and says "inside this box has been forged from the depths of perdition and should help you" The slacker takes the box and shows it to his best friend (who, after the slacker explains what happened to him, states in a whiny voice "why doesn't anything exciting ever happen to me!") They open the box with much trepidation and inside is a ............Dirt Devil. I guess you had to be there but it's really funny. So, anywho, he uses the Dirt Devil to suck up the soul of some bad soul/person but needs to know where to deposit it. The devil said there are portals to hell all over the earth. In fact, if you're ever at a place and you think "this must be hell on earth", it probably is. So the slacker drops off the Dirt Devil to the local DMV.

Oh, it made me chuckle and laugh out loud and there were some creepy scenes too. But, being on the CW channel and being at the same time as the lame formulaic show "House" it'll probably last 5 or 6 episodes so I'm trying to get everyone to WATCH IT! Tuesday nights at 9:00 Eastern. None of the actors are household names, except for Ray Wise, who brilliantly plays the devil. Any Twin Peaks fans out there? Ray Wise played the creepy Leland Palmer (who was inhabited by the even more creepy evil spirit "Bob"), father of the murdered Laura Palmer. (Am I using the word creepy too many times?) 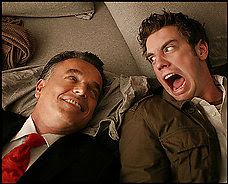 The Devil and the Slacker

So, take a break from all those mindless reality shows, and the heart wrenching "The War" by Ken Burns on PBS, to watch a thoroughly entertaining, if not unique, show. And now, a word from our sponsor...........

I heard the folks behind this series being interviewed yesterday on "Fresh Air" and it peaked my interest.
Sadly, I had a church meeting last night, so I missed it. It sounds like it should do well.

Possumlady, I only listen to the news on TV - I listen to Oprah, too. Watch TV? Never. Oh, except for American Idol :o)

What a great post! I don't know if I'll watch it, but I enjoyed reading you tell about it :-) Also, you changed the look of your site. Glad I stopped in tonight. Now, back to Gray's Anatomy to see if I want to watch it this season. I'm missing some of it right now, so obviously, I am not finding it compelling!

Oh my gosh. . .I just went back in to check on Gray's Anatomy and there was a deer that was supposed to be dead and this little boy was pleading for the pretty blond doctor to do something and she was saying it was dead; there was nothing she could do. Then, the wounded dear opened its eyes and tried to lift it's head. I can't watch. . .I'm not watching this!!

You know, they did an encore of Reaper last night at 9:00. I was torn between watching it again and watching Grey's Anatomy. I decided to at least watch the first few minutes as I missed that on Tuesday and when I switched over to Grey's Anatomy, they were showing this pregnant lady with a severed arm--yuck. I went back to Reaper!

Mary, I just don't know about you! Don't like the Simpsons, never read Harry Potter, don't watch tv, and the worst...watches American Idol!!! But both of our compassion for animals and the natural world trumps the superficial differences in likes and dislikes.

Love your new look, never go back to pink.
Try the series that c-span is doing on presidential libraries it is on friday at 8 pm. They started with Hoover, I think we are up to Eisenhower tonight.

HA! Rachel, I laughed out loud when I read you comment about "never go back to pink!" Yes, I do love pink and in the novelty of starting my own blog it seemed a natural. But, I've been a bit blogged out lately and it seemed every time I went to my blog the pink was so jarring. So I decided to make it a BIT more sophisticated, though keeping my blog title in my favorite color.

The C-Span shows sound interesting! I always forget about c-span since those channels came out fuzzy on my old analog box, but since I switched to digital, everything is crystal clear. Thanks for the heads-up!

How did you do the cool new header with the monument and the metro map?

Actually the new header was just a template I found. I, too, thought it looked like the metro map and a monument around town so that's why I decided to use it.