Why have I not been Blogging and a Typical Afternoon

Nothing momentous to report just a perfect storm of events including still being exhausted from painting my room and the subsequent hauling of trash and other things out of said room, birthday festivities including my sister and her family coming over and cooking me dinner, while my brother in law power-washed my house for me. As great as this was it still entailed massive cleaning to prepare for their visit, along with cleaning up around my front porch and sides of the house to prepare for the washing. AND, the most important thing, my camera's battery ran out of power. It is now recharging as I speak so hopefully will be back in action by tomorrow.

Now, there is never a typical weekend day here in my neighborhood. There is always something going on. Yesterday started with me finally getting up the nerve to check out a showroom of a company that does nothing but bathroom renovations. My main bathroom attached to my bedroom has needed to be remodeled since I moved in almost 10 years ago. Now that I finally can afford to get it done, I've been hesitant because: a) it looks SO bad, I'm embarrassed to even have workers look at it, and b) I REALLY hate having workers in my house when I'm not there. So, after getting two recommendations of a company, I decided to bite the bullet and drive to their showroom yesterday to take a look around. Well, nobody told me they weren't open on Sundays!! I drive back home disappointed, yet a little relieved. As I get out of my car, my neighbor Nina up the street pulls up and asks for help. Seems another neighbor Margaret found a newborn squirrel in her yard, and as she was just headed out of town, gave it to Nina. Well, Nina called our one and only wildlife rehabber and they were closed for the day. Nina handed the baby off to me and she had to go and pick up her daughter and would be gone a couple of hours. Now, as I said my camera was out of power but I found a photo on the web of just what the baby looked like: 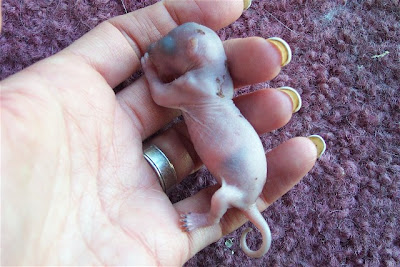 We had the baby warm in a little container of dryer fluff and mulch. I knew they needed to be fed very frequently so I started going on the web when my neighbor Karin dropped by. She works closely with the wildlife rehabbers and thought even though they weren't answering the phone, someone should be there and she would drive the little guy to the Center (a good 45 minutes away). If she did that, would I be so kind as to drop Jake the lab (who she had been taking care of) back to yet another neighbor up the street who was just finishing up an open house. So Jake dragged me up the street where I dropped him off with his owner Barbara. She lives in an absolutely gorgeous craftsman bungalow. She asked me if I wanted to tour the place. But, of course! Oh, my, I wish I had pictures to share. This house built in 1933 and has only had 3 owners. Each one kept the original wooden moldings and trim, tile fireplace and high ceilings, with wood beams. I told her, "wow, just think of all the animals I could have if I had this place!" She thought I should buy it even though it is about $600,000 OVER what my little house could get.

I was chuckling about that as I walked back down my block. I noticed a woman in a red convertible drive up quickly and get out of her car and run up to a neighbors house. Problem was, the car wasn't in park and started rolling backwards. It took me a few seconds to realize this and started yelling to her as I ran to the car. I tried slowing it down as she came running. We both were trying to hold it back and she finally reached in and pulled on the emergency brake. It stopped about a foot from plowing into a parked car. We were both laughing and she gave me a big hug and thanked me profusely. I walked back home to hear my phone ringing. It was my neighbor Karin. She was at the wildlife center and just wanted to let me know that there were people there and they started feeding the little squirrel right away. All is well. I went on to feed my herd. Just a typical Sunday afternoon.

Oh my gosh. What an incredible string of events! You should write a book about living in Takoma Park. . .well, you have a blog, anyway :-)

Wow, your blog left me feeling exhausted! It's amazing you have been able to blog at all with everything going on in your life lately. So happy the baby squirrel is OK. You too!!

I agree with Dorothy about being exhausted just from reading!
Oh that baby squirrel is so tiny. Give us squirrel updates.
And what color is the bedroom now?

And I wonder why I never get anything done around here!! It's because there is always something to get my attention. Dealing with baby squirrels and big yellow labs and touring a house of sale up the block is a lot more interesting than doing laundry and washing dishes ;-)

Oh, and kgmom, I decided to stay with the original bright green. After I lived with it for a week, I decided it wasn't too bright and I really started to like it. I've had a few neighbors over and consensus is "great color"!! Now, I just have to get my energy back to do the trim.

Yes, I'm exhausted. You know how to pack the action!!!! If I want action, I should come to your town. I laughed at the rolling car and also at your quip about the house value $600,000. You have a great sense of humor...

I guess that little baby squirrel is growing hair by now. He'll come back and rob your feeders :o)