GREAT NEWS FOR MAGGIE and Cross Your Fingers for Minneapolis

Last week the Alaska Zoo board voted to send their lone African elephant Maggie to the PAWS Santuary in California!! Hurray!!!!!
The following is from an article in the Anchorage Daily News..........
********************
Accommodations (for Maggie) will include a sprawling 75-acre enclosure where she can mingle with four other African elephants. She'll have a posh 20,000-square-foot barn in case the central California climate gets a wee bit chilly. And there is an indoor jacuzzi that she can fully submerge in to rest her feet. Seriously.
The decision to name PAWS as top pick came with unanimous agreement at a board meeting Wednesday night, said board president Dick Thwaites. The details of the move still need to be worked out, he said, but both the zoo and the facility have reached a preliminary agreement.
Those details should be ironed out within two weeks, which should offer enough time to ship her off before winter sets in late next month, said Alaska Zoo director Pat Lampi.
"We wanted to get this done before the snow flies," he said. "We chose PAWS because of their facilities and staffing, and we wanted to make the best choice for Maggie."
The PAWS facility recently made headlines when its officials, accompanied by TV personality Bob Barker, visited Anchorage after proposing to take Maggie and fully pay for her relocation expenses.During the visit, Barker said he would donate $750,000 to care for her if she were moved to PAWS.
*************************** 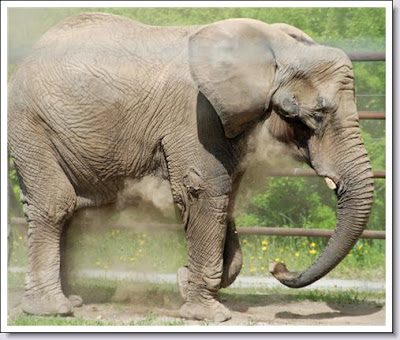 Maggie dusting herself up for the trip to California!

Thank you Bob Barker!! I've heard good things about PAWS. While it's not The Elephant Sanctuary, I had real fears that the incredible long distance from Alaska to Tennessee would be too much for Maggie.

On to Minneapolis. Now, I'm not a Minneapolitan. I'm a native St Paulite thank you very much. But, I keep up with Twin City news almost daily thanks to the internet. Even with this connection, I didn't know that the Minneapolis City Council is scheduled to take a vote on whether to ban wild animal circuses from the city. The vote is tomorrow, Friday, September 21st. I don't hold out a lot of hope, though. As much as I tout my home state of Minnesota as being very progressive, truth be told, it has slowly become much more conservative over the past two decades since I left. (Hmmm, I wonder if that is just a coincidence?) There was even a letter to the editor in the Minneapolis Star Tribune today saying the City of Minneapolis should not give-in to the demands of those "animal rights activists". After all, "their hidden agenda is to ban the eating of meat and the wearing of leather" don'tcha know.

The hearing last week was well attended though by over 100 people in favor of the ban. One of the speakers giving expert testimony was The Elephant Sanctuary's own Executive Director, Carol Buckley. I also found a wonderful Minneapolis-based group called CRY (Circus Reform Yes) that is spearheading this initiative. So, keep your fingers and toes crossed, say a little prayer, send out those positive, progressive vibes so that Minneapolis can join other progressive cities that have already banned wild animal circuses.
Posted by possumlady at 9/20/2007 04:17:00 PM

Thanks for the update on Maggie. That is good news. I hope Minneapolis gets as progressive as you are. Glad you found the time to post again!

Oh hurray for Maggie.
By the way, I just finished reading Water for Elephants--don't know if you have read it or not, but it is a treat.

UPDATE: Well, the Minneapolis City Council voted against the ban and instead put in place more regulations and stiffer fines. All this actually means is that NOTHING has changed. The USDA is in charge of enforcing the AWA (Animal Welfare Act), but because of lack of staff, the AWA is virtually unenforceable with regards to circuses. I am ashamed of the City of Minneapolis and deeply saddened for all the wild animals that will have to continue to live their lives in basically a living hell of abuse, with the use of electric shocks and bullhooks, food deprivation and being constantly chained with no freedom of movement. All this just to get an hour of enjoyment for the little kiddies.

I must say that at times like this I am completely dumbfounded at the lack of humanity and empathy some humans can have for any other species of animal. I always like to quote a line from the movie Starman with Jeff Bridges who is an alien that comes to earth and sees a deer tied to the back of a car. Karen Allen is trying to explain the "sport" of hunting and Jeff Bridges says "you truly are a primitive species."

Good quote, but sad fact. Is the lack of humanity and empathy for other species really so surprising when there is such lack of both for members of the same species?