Well, one definite yes. Confused? So am I.


Let me start out with the one certainty. We definitely have a new member at Possumlady Place. He is large and pink and goes by the name of Orson.

If you are addicted to the site icanhascheeseburger, you may have come across one of the ads on their site for squishables.com. As someone who has never outgrown her love of stuffed animals I was intrigued and clicked on the ad. Squishables are these enormous stuffed very round animals. Each one more adorable then the next. I thought of one of my sisters that was diagnosed with breast cancer last fall and had the idea that a squishable sheep might just be the thing to lift her spirits and keep her company during her journey through surgery and beyond.

So, through the miracle of the internet, I had a squishable sheep sent directly to her. I think she was a little shocked to open the box but she grew to love the little sheep and it even helped in her recovery as she was able to rest her arm on the fuzzy little lamb.

Since then, I started to have a yearning for a squishable of my very own. Specifically, a large pink octopus squishable. Low and behold my Christmas wish was granted. 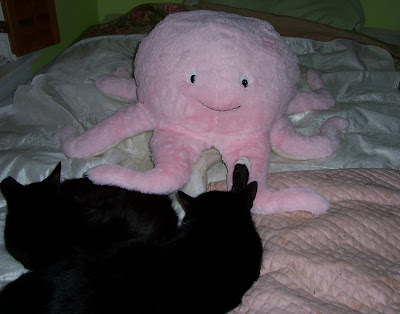 Pictures do not do him justice. Orson is so big and so pink and so incredibly soft. He arrived in the mail last week when I came home very late after the first day and evening meetings with our governing board. I was NOT in a good mood. It was 9:30 at night and cold and rainy. I had cats to feed and clean up after and it was trash and recycling night. But the moment I opened the box and Orson popped his big pink head out, I squealed with delight. You see, they put them in boxes a wee bit too small for them so when you open up the box they literally POP out.

Right now Orson resides on the top of my bedroom armoire. I had initially thought he would hang out on my bed. But, with so many cats there is always someone throwing up, (or worse). Take note of the large water (yeah right…water) proof covering I have on my bed in the photos. So to be on the safe side and to keep Orson in his clean pinkish glow for a little longer, the cats will not have access to him.

Oooh! Orson is so cute!
He looks like something my soon-to-be 16 year old daughter would like for her soon-to-be birthday!

We all need something to squish and hug.

Eh? What's this possible second addition you speak of? We may possibly be getting a new addition sometime soon as well!

Hi Christine! Orson is a cute addition to the family. I am glad that the lamb was able to comfort your sister.

So when do we find out about the possible second addition? Lisa

Christine--me too--still love stuffed animals. In my case, it's pigs.
I was once in Dulles airport and saw a large stuffed pig in the gift shop--HAD TO BUY IT. I kept telling myself, I rescued him. I named him Gordo--big pig--and he still sits on my bed.
Love Orson.
And the next new addition. . .???

Lynne, if your daughter loves stuffed animals I would definitely go to the site and check them out. I always had my sight on the octopus but they have recently come out with a racoon that is adorable! Unfortunately, it seems that everyone else thinks so too and he has been sold out since they got it in! Yes, cats can only be cuddled on THEIR time and really don't care to be squished.

Hmmm, Dog-Geek, intriguing! I have to say though that if I had your type of acreage, I'd be picking up new animals right and left!

Hi Lisa, I'll be posting soon about the possible new addition. I was planning on putting it all in one post but have had a bad chest cold since last Monday and my energy level is way off.

Donna, why am I not surprised that you love pigs! Maybe it's the photo of you as a child holding that cute little piglet.