To Give Thanks and to ask for Prayers

Even with all the griping and fear about the current economy, I still have so much to be thankful for. Mainly that all my kitties are all for the most part healthy and happy. I say for the most part because there is always one or two with some kind of allergy or respiratory or stomach or teeth issue. Nothing life threatening, just annoyances. And, I can afford the vet bills when it is necessary to bring one of them in.


The blogsphere is another thing that I'm thankful for. To all you who I've gotten to know through your comments on my blog and from your own blog, thank you so much for your friendship, advice and good wishes.


The cat blogsphere is also amazing. There are so many out there taking in strays and fostering shelter cats spending enormous amounts of their own money. When someone is dealing with mounting vet bills, someone else will hold an auction or raffle to help out. If you read the comments on my past post on pinching pennies you noticed that I won a raffle that was held to help Moki and his family with medical bills. As thrilled as I was to have won the raffle, it has been tempered by the fact that Moki is not getting any better. Moki was taken in over a year ago as a foster kitten. He developed a severe neurological disorder that the vets think was a virus that was spread from his mother. Even with his severe disorder, Moki seems like such a happy and contented kitty. He recently developed a severe urinary tract infection, along with his temperature becoming dangerously low. Moki's family was hoping his temperature problems were a symptom of his UTI but the UTI is now clearing up yet his temp remains low. The real fear now is that the virus that has been dormant is now surfacing and affecting the part of his brain that regulates body temperature. 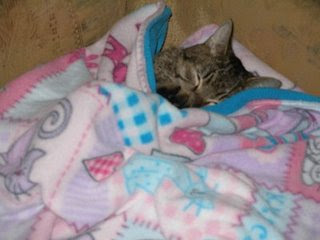 Here is a photo of Moki all bundled up trying to get his temperature up. You can read more about him at his blog savemoki.blogspot.com. So, I'm asking for your good thoughts and prayers for little Moki and his family this Thanksgiving.

With that, on this Thanksgiving Day, I'd like to leave you with some words from Rev. David O. Rankin, a Unitarian Universalist minister:

I declare a Sabbath Day--to walk in the wilderness of enlarged perceptions; I declare a release from work--to nourish the stamina to pursue ideals; I declare a special hour--to help cherish life's joys and combat life's sorrows; I declare a reign of holiness--to deepen our grounding in the sustaining mystery.

I declare a time for simply being and letting go, for rediscovering great, forgotten truths, for basking in the arts of the ages, and for learning how to live again. 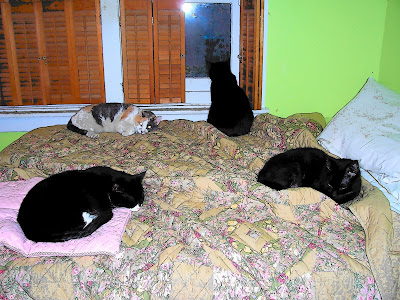 Have a blessed and restful Thanksgiving. From all of us at Possumlady Place (just a fraction of which is represented in the above photo)! Oh, and I DO make my bed! This photo was taken very early one cold morning as I just got out of bed--really, it was ;-)

Happy Thanksgiving Christine to you and your kitties.

I will keep Moki in my thoughts. Lisa

Happy Thanksgiving to everyone at Possumlady Place. Today we are counting our many blessings, including your friendship...

KC and the Giggleman Kitties said...

I read your comment on Moki's blog and had to come visit.
Hope you and your wonderful family have a great Thanksgiving Day... we are counting all our many blessings as well. That includes, as Moki just said, meeting you.
Love & Purrs,
ML & KC

Happy thanksgiving to you and your kitty crew, and many prayers for Moki - I hope that whatever is wrong will resolve itself!

I love your special winter warming kittens. And, my, the green walls are bright! I remember when you were painting them.
Thinking good thoughts for Moki.
And for all kitties everywhere who need a bit of extra help.

That photo of Moki covered in a baby blanket made me melt, Christine.

You are a savior, you know.

I wish you peace this weekend.

And, thanks for your Thanksgiving tale - told so well!

Concats on winning Moki's raffle - we're purring for him to get well too. It seems like the kitties at your place understand that an empty bed needs lots of kitties...don't worry too much about 'making it' - it's more important that the kitties have a place to sleep while you're away...