After paying the over $300.00 vet bill yesterday, my vet came out to discuss what he found--basically nothing abnormal. He sent the xrays to a radiologist to look over but from his point of view there was nothing out of the ordinary going on. He even xrayed Sweet Pea's lungs, but everything was clear. The next step will be to get an endoscopic sonogram from another animal hospital as my vet is not equipped to do that.

As soon as I got Sweet Pea home he dashed to the litter box. Poor thing, I've never seen him pee as much as he did then, which made me mad wondering if they left him in a recovery cage with no litter box all day? After that he ate and drank and leapt up to all the open windows for some fresh air. Later last night, he jumped in my lap and we watched "It's the Great Pumpkin Charlie Brown" together. Knock on wood, no bleeding since Tuesday morning. 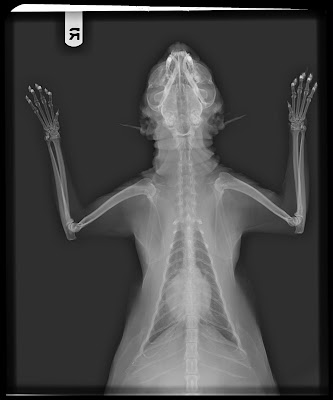 My vet sent me home with his xrays on a CD. Look at those cute little "hands"!

Is that a cat scan? Sorry, I couldn't resist.
Well, I guess here's a case of no news is good news. Are you going to the next step? Hmmm--getting expensive to find out nothing.
Maybe now is a time that calls for watchful waiting.

I think he looks better curled up on your lap!

I'm glad they didn't find anything wrong but still ...

They look so fragile in rays don't they ...

Wow, what an amazing x-ray. Still it doesn't make it any less worrying or frustrating that they found nothing.

Prayers and puurrs on their way to you!

Sometimes, after anesthesia, kitties can't pee for a bit but usually the vet has to see that they can pass urine before being discharged. Maybe he was given a lot of fluids during his procedure. Poor Sweet Pea now has to have an additional anesthesia.
We are still praying for him.

Okay Donna, (cat scan) I should have thought of that!!

Hi JC, yes they do look fragile and vulnerable. I had a hard time at working trying not to think about what he was going through all day.

Thanks for the continued prayers and purrayers SeaThreePeeO!

Thanks for the information Kari! I had never heard that before about not peeing after anesthesia. I also thought that they may have gave him some sub-cut liquids after the procedure.

Well, glad to hear that they didn't find any bad, even if they couldn't tell you what it is.

My mum takes human xrays for a job, but she thinks Sweet Peas is very cute, and his lungs look clear and his heart a good size.

Holding in the pee til he gets home is pretty normal, as Poppy needs to have a good go outside as soon as she gets back from the vet visit.

We are sorry there were no easy answers to the bleeding, and we hope the specialist is able to help.