The weekend flew by in a blur. Never did accomplish much. I did do some cleaning and yesterday I made my chocolate chili for the first time this season. Watched some good movies--The Night of the Hunter on Friday night and yesterday while I was making chili, I watched Inherit the Wind with Spencer Tracy. A great old movie about the Scopes monkey trial in 1925 and the illegal (at the time) offense of teaching evolution in the schools. Then, last night I watched the original The Blob with Steve McQueen--what a hoot!
Mostly I fretted over Sweet Pea. He is still bleeding from his mouth but if weren't for that, you would never know anything was wrong. He still runs around with tail in the air, is eating and drinking well. So I called my vet and made the dreaded appointment. I will bring him in on Wednesday morning to be sedated and have an xray taken of his head and throat. The vet will also be able to get a good look down his throat while he is sedated, as well as a much more thorough look at his mouth. If all goes well, I'll be able to pick him up by 6:00 Wednesday evening. 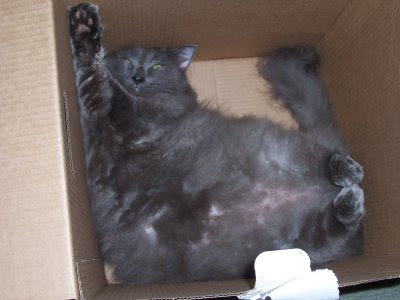 Continued prayers for Sweet Pea! I've been thinking of you and hoping all was well. I hope that the vet finds the problem, and that it is nothing serious!

Praying for you and Sweet Pea!

Hi Christine! It seems you did accomplish quite a bit.
My thoughts are with you and Sweet Pea. It is natural to worry. Not knowing is always the hardest. Take care. Lisa

So sorry for the uncertainty of this all for you.
Let us know--and I will be thinking and saying little prayers for the sweet Sweetpea.

We are sending you a hugs for your worries. We hope Sweet Pea is ok, and it is nothing serious.

You have my purrrs and thoughts.. Mum and I will be thinking of you and joping all goes well.. Hugs GJ x

We are praying and purring our hearts out for Sweet Pea. Is there a vet in vour area that offers endoscopy? Since Sweet Pea will have to go under anesthesia for an exam, endoscopy can take a look into the esophagus and stomach. It can be costly but the anesthesia itself is the expensive part. It is so unusual that he's so perky and still bleeding. God bless him and you.

I dropped Sweet Pea off at the vet this morning. Oh, I was upset when I left, not knowing if I am going to see him again or not. Before they took him, I had his crate door open and was petting him. He was purring and head butting me and I felt awful! Had to fast all the cats last night. It was hard to put Sweet Pea in the crate and then run around putting the food and water back down again. He was not too pleased!

I am trying a mantra to repeat to myself today. I can't remember who wrote it--a nun or saint? "All shall be well"

Am keeping you both in my thoughts and waiting to hear how everything went and what on earth is the cause.

Just got a call from the vet's office. Sweet Pea is alert and made it through the sedation--Yay! But the results are still inconclusive--Boo!

The vet tech said they did find some thickening in the back of his throat but that was basically it. She said the vet will tell me more when I pick Sweet Pea up. I'm guessing he will probably refer me to some kind of a specialist.

So, I'll be leaving work in about 20 minutes to pick up my boy. I brought temptation treats with me as I'm sure he will be hungry!!