Hi all, well I'm back from Puerto Rico and am SOOOO happy the board meeting is done and over with. Got back late Wednesday night but am still tired and wanted to do nothing for a few days. Am up to posting a few photos today though. Puerto Rico was as expected, hot and humid, with rain and storms most every night. It was a tropical paradise though and the people were incredibly warm and gracious. Tropical islands are just not my thing (yes, I am weird), but I'd go back to Puerto Rico in the winter. The flights are not expensive and even though you are technically in the U.S., you do feel like you are in a foreign country (except for being able to eat the fruits and veggies and drink their water, a big plus!!). I also became addicted to their local coconut yogurt! I had it every morning and I added crushed pecans and a half a banana to it. I'm sending Dannon and Yoplait an email plea for them to make coconut yogurt.

Let me show you the view from my room 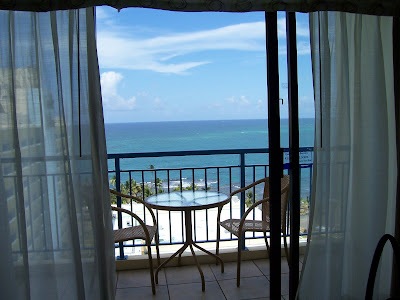 This is the San Geronimo fort, photo taken from my balcony 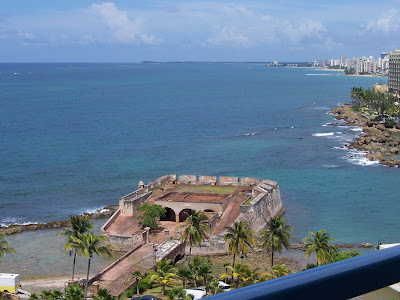 Another photo taken from my balcony of the coastline 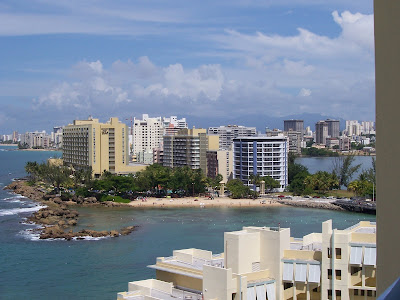 Last Sunday I arranged a reception for around 70 people. This included our governing board and staff and the folks from our Puerto Rico affiliate, along with some dignitaries from the Dept. of Education in Puerto Rico. Our affiliate had two surprises for us at the reception. One was a small band playing local music-- 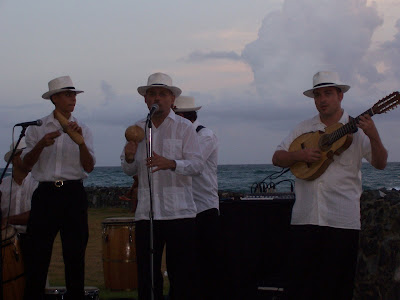 Then, they had a local folk dance troupe consisting of high school kids to dance for us. They were absolutely amazing. The professionalism and showmanship of these dancers was just topnotch. First, they danced their spanish heritage 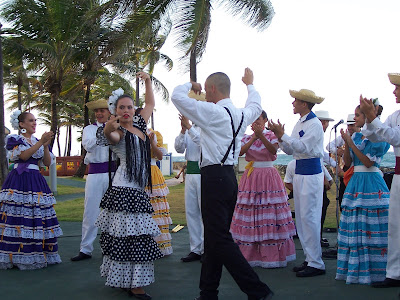 After about 20 minutes of dancing (in 95 degree heat with 95 percent humidity), they left. They came back after about 5 minutes now dressed and dancing their african heritage 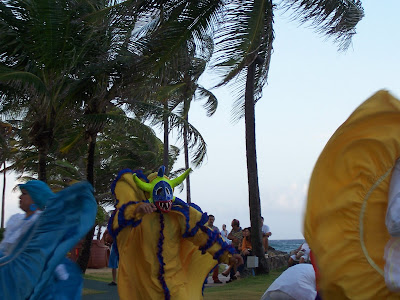 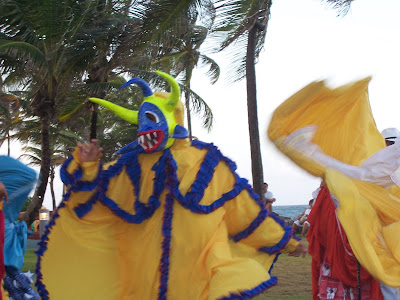 Then, after almost an hour of non-stop dancing, the troupe left and the band kept playing. The head of our PR affiliate dragged my boss up to dance. Now, my boss is a tall runner, in pretty decent shape. I never thought of him as a dancer though. My hunch was right ;-) 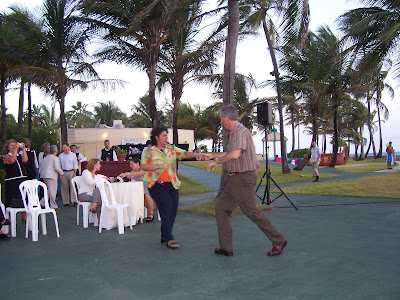 That's all for now. Tomorrow a few more photos of our last dinner together. (What happens in Puerto Rico, stays in Puerto Rico--at least that is what some of the folks told me as I was snapping pictures saying they were going in my blog. I told them not to worry as I only use first names!!)
Posted by possumlady at 7/21/2007 12:01:00 PM

Welcome back. No, you are not weird in not having tropical islands as your thing. I am there with you--I enjoy a visit, but give me cool (or even cold) weather any day!

What a view from your hotel window.

What a fabulous view from your hotel! PR would probably be a great place to spend Christmas or New Year's. I'm guessing those accommodations would be pretty pricey! Glad you had some fun while there.

Welcome back! Tropical in January sounds nice :o) I can't believe those dancers who costumes and danced in that heat for an hour. Wow.

I could have sat on your balcony for hours. Lovely views!

One thing good about planning all the meetings and working directly with the hotel--they usually give me one of the nicer rooms! I also had a box of chocolates waiting for me when I arrived!

Mary, I have to hand it to those high schoolers. They never broke character, always smiling with big animated faces while sweat was dripping down them!! Ah, but they are young and were born and raised in that weather so hopefully it was not as exhausting as it looked.