A Mexican Standoff and visits from friends

A Mexican standoff is a stalemate or impasse, a confrontation that neither side can seemingly win.

We have been blessed with some wonderful weather this summer. Unfortunately, we are paying for it right now with highs near 100 until Wednesday. But, when the weather is nice all the windows get opened. Even though there are more windows open then cats that can lay in them, two of my cats--Sweet Pea and Woody always seem to vie for the same window. I see it time and time again. They both jump up to the window at the same time, then they sit there heads down, butting each other. Usually without sound but sometimes with a growl here and there until someone gives and jumps down. It happened last week when it dawned on me to get my camera. But, by the time I had it turned on and focused, they got interested in what I was doing, hence the photo below: 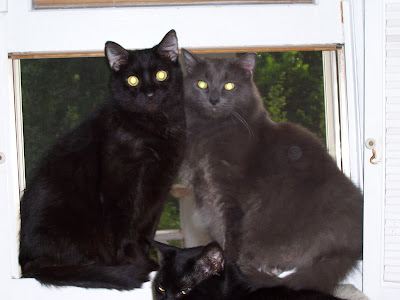 Apu, sittng below them can't be bothered with those types of shenanigans and does his best to ignore them. Do you want to see who won? 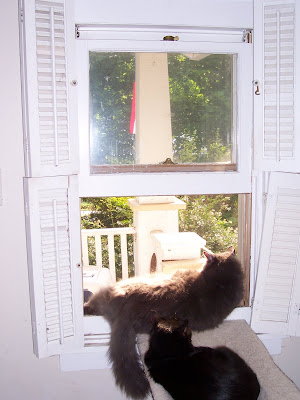 SWEET PEA! With Apu continuing to ignore it all.


Now, onto my visitors. One of my "baby" jays came by to visit yesterday. Actually he was trying to steal some dry cat kibble on the porch: 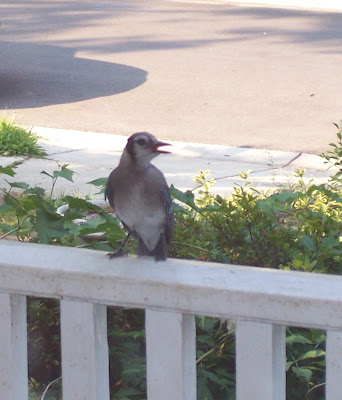 Oh, and does anyone know what this little guy is? I tried photographing it from many angles and from inside and outside the storm door but this is the best photo I got. It is tiny, just about an inch wide from wing tip to wing tip with the body curved up like a banana. It stayed all day and flew away late at night: 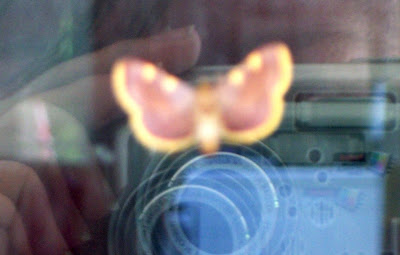 Then, I was getting ready to lock up for the night when I started hearing all these trills and chirps 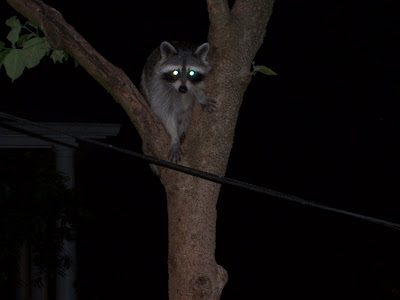 After that little guy got down there was a lot of rustling in the bushes. I started chirping and then said "okay, who is all here, come show yourselves" and they did 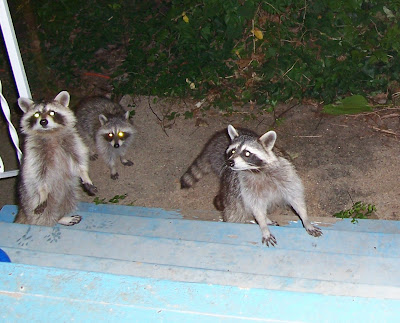 I don't know if you can tell but there are FOUR of them! The one on the right on the stairs is the mother as she stood up after I took this photo and I could tell she was still nursing! I love the little one on the left. Look at those jazz hands!
Posted by possumlady at 7/09/2007 06:45:00 PM

Oh my goodness-4 raccoons!?!
Are they there to raid food supplies? Just visit?
Do your cats notice? or mind?

Oh My Gosh!! Those raccoons are unbelievable! They are so cute; I hope they don't carry any diseases. Also, love the photo of Woody and Sweet Pea both looking at the camera with their heads together. Too funny! It certainly is busy up there in your neck of the woods.

Kitto kgmom! I've never had a raccoon! Your cats are precious - I had a long-hair Maine Coone.

I'm no help with the bird ID - I thought it was a mocker but you described a small bird and the black rim on the neck confuses me.

Yes, they are around to raid the cat kibble. I have been bringing the food in late at night but leaving out water as it has been so hot. The outside cats have really slowed down in eating anyway.

Most of the cats and the raccoons get along. My old almost deaf outdoor cat, Graybeard, hates them though and will hiss and slap them around if they are on the porch when he is. And, the raccoons do not put up any kind of a fight. They just waddle away. The other cats kind of let them be. Last year, I saw a mother leading her two babies out of my yard to cross the street. It was so cute as it was just a line of raccoons waddling. Then, I saw Toby, one of the outside cats, fall in line behind the last baby and followed them across the street and into the woods.

Love the raccoon pictures. After 18 years where I'm living, a raccoon has finally showed up in the yard to eat corn and birdseed from my ground feeders. They're such cute animals (although they can destroy a bird feeder in a quick hurry) and I love their little "hands." They are so adaptable and as more of their natural habitat is lost, they readily adapt to our human world.

You have footprints on the step, too. Cute.
We have a raccoon family in the barn. I'm hoping they'll move out if it gets crowded--but I don't want to have to help it a long. Part of me feels sorry for them cowering in residential areas--I'm sure they'd prefer wide open spaces, too, if they had the choice.

Hi Ruthij! Welcome to my blog. I looked up your blog and see you are another Minnesotan! I grew up in St. Paul and moved out to the DC area in 1982. It was only going to be a 2-year stint in DC--Hah! I never did get down to southern Minnesota much except for camping around Zumbro Falls.

Nina, yes, the raccoons are very cute but also can be very frustrating which is why I'm trying to remember to bring the cat food in at night. The water I leave out is almost black in the morning due to all their hand washing! Personally, I prefer possums as they are much more timid and less destructive around the house.