A Keeper and some random Sunday shots

Last weekend I made a surprise dinner for my oldest sister and brother-in-law, who both turned 60 in June. My niece and I coordinated it. They would go to 5:30 mass on Saturday, I would go over and get in the house and have dinner almost prepared when they returned. I was thinking of going with a tried and true dinner but I saw Food TV's contest last year on building a better burger and I have always wanted to make the burger that was voted "Best Alternative Burger." It's called Grilled Pork Burgers Indochine and they are a keeper! So good they were, I decided to make them again tonight just for myself. Look at the ingredients that go into the ground pork: 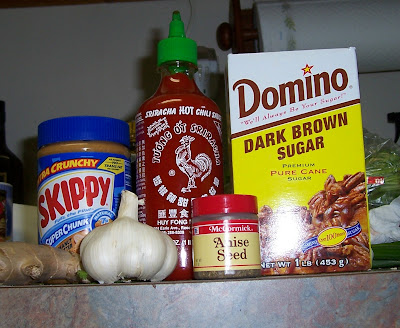 Time to fire up the grill: 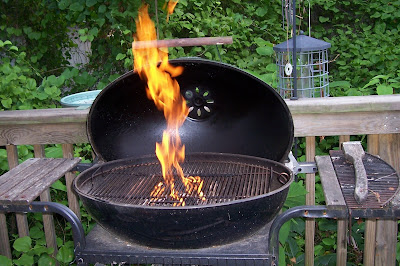 Oh, and there is a dressing you make for the buns. Actually, the recipe calls for mini french loaves. The dressing is basic mayonnaise with lime juice, green onions, cilantro, and basil. In roughly 9-10 minutes the burgers are done and the french loaf has been grilled/toasted: 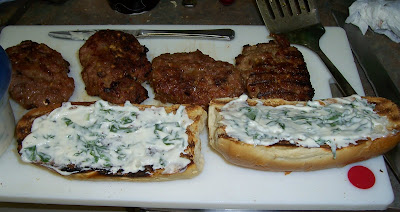 Quite delish!! I must say there is one ingredient that was called for that I did NOT put in. It calls for a quarter cup of vietnamese fish sauce. I just couldn't do it. Maybe I'm missing a key flavor but I felt it was worth the risk.

Now onto the random photos for the day. Instead of picking up my room and vacuuming, I decided to try to hone my bird photo-taking. As you can tell, I haven't made much progress. See the cute little nuthatch? Wow, he just wouldn't stand still: 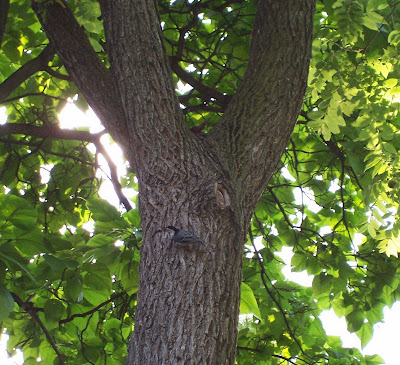 Sometimes it pays to not clean up under the feeders! 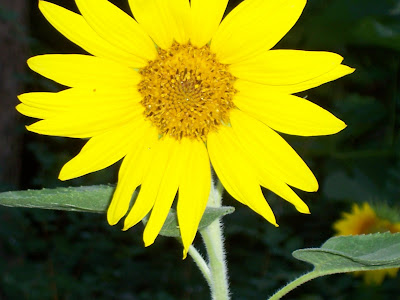 Last shot. A photo of one of my jay "babies" 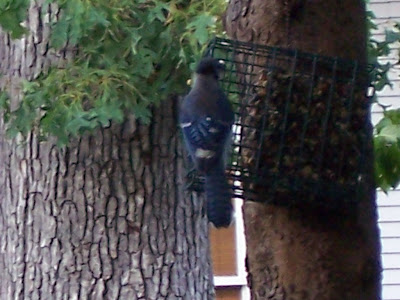 Okay, I need to get back to laundry. Have a good evening. Not to rub it in, but we had another spectacular weekend with low temps and low humidity. I just know we will pay for it later.
Posted by possumlady at 7/01/2007 08:12:00 PM

It's 12:20pm and I'm starving. Those burgers are making me drool. The dressing looks fabulous, too. Oh, I'm so hungry!
I would have crossed off the fish sauce, too.

I enjoyed seeing your blue jay babies and your nuthatch :o) Chores do get in the way of a little fun, don't they?

You know the burgers are actually better on the second day! I brought one for lunch and it was even better than last night.

I really think I need a better camera. I had more close up photos of the jay using my zoom feature but they all turned out blurry. It's a constant frustration (along with chores, of course).

Wow; sound like mighty flavorful burgers! I wonder if they would still be good made with ground chicken or turkey. I have been on a "no mammal" kick for about a month. I bet they would still be good because of all the flavorings that go into them. DH and I had the first of the season tomato, mozerella and basil tonight--yum, yum. With ciabatta bread and red wine.

Hmmm--where did the burger recipe come from?
Yes, we have had great weather. We're north of you by about 100 miles, & it has been gorgeous!

Cat59: Why are you on a "no mammal" kick? I haven't had much luck with ground chicken or turkey in dishes, like chili. There just doesn't seem to be any flavor. And ground chicken and turkey can be just as fatty if not more so than beef or pork. You should try it though. You can get the recipe from foodnetwork.com and just type in grilled pork burgers indochine. I paired it with an Asian coleslaw recipe I found on their website also.

kgmom: I got the recipe from foodnetwork.com. I have to say every place I've been to in Pennsylvania I have liked. I'm originally from Minnesota and Pennsylvania seems very midwestern to me for some reason.

Re: no mammals, I've thought about doing this before, but never wanted to give up beef. However, for whatever reason, beef has become psychologically unappealing to me so I stopped eating it. I don't know if I really feel the same way about pork, but I thought, what the hay, I'm not eating beef, I might as well not eat pork. This may just be a phase. If I want a steak sometime, I'll have one.

Wow--that looks delicious--maybe I'll try something new on the grill for the Fourth!!