The past few weeks have passed in a blur. The only word that keeps coming to me as I think about how I’ve been feeling is--frazzled. My association’s governing board came and went. The three day meeting ran pretty smoothly with no glaring errors. Even with the many early mornings and late evenings at work, along with the neighborhood cat sitting, I always made sure all my cats were accounted and cared for. As soon as the board left, I finally was able to spend some time with my brood.

Moochie is one of a few outside strays that I have been taking care of for over six years now. As black as coal and full of spit and vinegar, Moochie is a force to be reckoned with. A very aggressive cat, he would often chase the more timid ones, much to my aggravation. If I ever heard a cat cry out I would run outside and most likely find Moochie chasing Chloe or Toby up a tree. So, I was taken aback when about two weeks ago, I saw him slink past a couple of the more timid cats, almost like he was afraid of them. I bent down to pet him and was amazed at how thin he had gotten. How long had it been since I last pet him? It couldn’t have been that long ago? I kept my eye on him and saw that he was indeed moving quite slowly and while he would run to his food plate when I put it down, I saw that he would only take a few bites and then lie down. I starting bringing him in at night and throughout the evenings and mornings try to get him to eat. He was almost totally off of both wet and dry cat food. I took out the Nutri-cal supplement that I used with Butterball and luckily Moochie liked the taste. I knew that he LOVED chicken so I bought one of those roast chickens at Whole Foods thinking he would get the dark meat (that I don’t like) and I could eat the white meat. I cut up the meat of a leg and brought it to him. He picked up a piece and then promptly spit it out. Wow, he won’t even eat roast chicken. Hmmm, I then cut up a few pieces of white meat and put that in front of him. Wouldn’t you know, he chowed down on that--so much for my chicken dinner. I knew that roast chicken wasn’t nutritious enough for him so I thought I would try some white fish and tuna wet cat food. I NEVER serve this to my cats because it is just SO stinky. But, that might be just what he needs to stimulate his appetite. 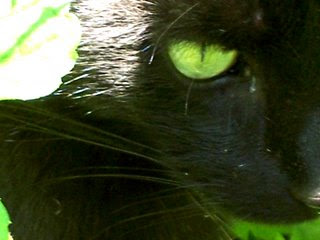 (Moochie, lounging in the brush a couple of years ago.)

It worked. He is still not eating his usual amount but he is eating the wet cat food and will even crunch a few pieces of kibble at a time. I also bought some vitamin fortified cat treats that he loves. His energy level has also improved. I almost canceled his vet appointment for yesterday but I thought better and took him in to get checked out.

Very bad news. The vet felt a large baseball sized mass in his abdomen--most likely gastrointestinal lymphoma. My vet was very sorry but he said he wouldn’t even refer me to a specialist. That might sound harsh, so I need to point out that my vet knows me, knows all the cats I have, knows my finances. Even if this were my beloved Butterball, I wouldn't put him through a series of poking and prodding tests and/or surgeries. At this advanced stage and size, the vet said it would be a matter of weeks, if not days, before I would need to bring him in to be put down. I asked about his increased energy level and my vet said it was because of two things, 1) I was getting food and supplements into him. Without coaxing, he would have probably (and indeed almost) stopped eating all together a few weeks ago; and 2) I was spending a lot of time with him.

Here I am, back at this familiar juncture. I was so hoping that I wouldn’t have to deal with another cat illness and death this year. Moochie is now inside and getting lots of TLC. 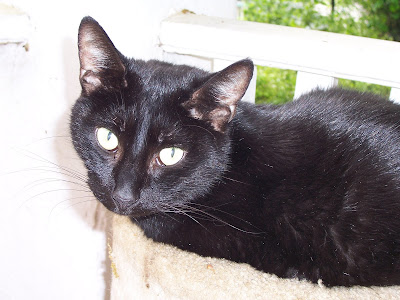 (Enjoying the breeze on the front porch early this morning)

Aww,Christine, you sure have had a tough time of it with your kitties lately. It speaks so well of you that both of the reasons the vet stated that Moochie was in better spirits were because of YOU and your loving care.

Oh no! I'm so sorry to hear about Moochie's illness. At least you were able to find out what was going on, so that you could make sure he is comfortable and loved during whatever time he has left.

Lynne says it--Awww Christine.
First thing, I must say--how lucky these cats are to have you--so caring, and nurturing for them.
Second, I TOTALLY agree about not putting Moochie through anything. That has always been my philosophy. I am not being cold or uncaring--I just can't see making a pet suffer. They don't understand your explaining words; they only understand the pain. And of course they understand the love. That's what Moochie has now--some good days before he joins other sweet pets who have crossed into forever land.

That cat is handsome looking!

Oh Christine, I always read your blog but stopped commenting on blogs altogether because I'm so bad about updating mine. Haven't done it for a long time. But I feel compelled to write you about Moochie... I am so sad for you and for Moochie. But what a lucky cat he is to have found you and been under your wing (and trully you are an angel to your kitties)...for so many years.
Biggest hugs to you both!!

Hi all and thanks for all your kind words. Moochie is holding his own. Still eating, and spending time on the front porch. This morning he found a soft pile of viney brush and is currently curled up there.

I developed a bad cold/flu and was off of work yesterday. Moochie stayed by my side the entire day. Throughout the night when I would wake up to blow my nose, Moochie would make a little noise and slowly walk over to me to rub up against me then go back to lie down.

Dorothy! It's so good to hear from you! I haven't been so good with my blog either.

It is so sad when our little friends get sick - especially when we cannot do anything for them.
Our Snuffy was going to be put down at 3 mnths by the SPCA - we rescued him from THEM! He survived 10 years, taking at least one pill a day, and even eating baby food from a spoon for a while. He had 4 or 5 surgeries, cancer twice, and a life spent sneezing and snuffling. He did not know any different.
One year I wondered if I could claim the vet as a dependent on my taxes!
But, we love them, and in their own little ways, they give back as much as they get.