No TV and No Beer Makes Possumlady Something Something*

*My apologies for those of you that aren't Simpsons fans since the title is a variation of a quote from Homer when they did a Simpson's version of The Shining.

Day two of the snowpocalypse. I still have electricity which is a VERY BIG deal. But, I still don't have tv and for that matter beer! Luckily I'm not a sports fan and would not be watching the Super Bowl if you paid me. (Well, I guess it would depend on how much!)

Shoveled FIVE times yesterday. Today it is in the teens with the sun shining. A plow FINALLY made an appearance about an hour ago but big deal--my car is completely buried and am not planning on going anywhere anytime soon. Let the outside kitties out this morning and Chloe is still out sitting in the sun on a front porch stair. Made a small double batch of Zick suet dough yesterday and will be distributing it today along with more bird seed. I have a hungry mob of grackles that came by yesterday afternoon and they're back looking for more, more, MORE!!

I have no idea how the feral kitties are surviving. I waded through (pardon my french) crotch deep snow to get to the back shed, carrying a shovel, a can of cat food, a baggie of dry food and a plate. Found a small area that I shoveled out but if she was under there, she didn't make a sound when I called her. I left the plate close to the opening. Also left a small bowl of dry kibble on the front porch last night and this morning it was all gone with little kibbles flung every which way so that must mean a raccoon stopped by.

No photos yet as I'm still in my jammies. I'm quite surprised that I'm feeling no ill effects from all the shoveling yesterday. In fact, my back is feeling quite good! Naproxen rocks!! 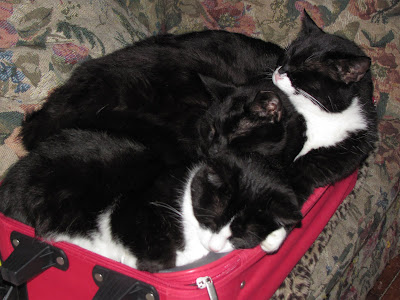 Manny, Mo, and Jack...no, no it's Chloe, Oliver and Figaro. I really need to bring my suitcase back down to the basement!

omg, that picture is too cute...you have the leave the suitcase right there! And your feral kitties are so lucky you haven't given up on them.

p.s. glad you still have your electricity, whew!

Okay, I'm a dork...obviously that was meant to say "you have TO leave the suitcase"...I must have some brain issues going on!

What gorgeous things to find in your suitcase.. LOvely... HUgs GJ x

Hallelujah!! I have cable TV!! It came back on last night around 10:00. I called the cursed Comcast and told them they had to deduct two days worth of service charges, which they did...a whooping $4.30!

Hi CD! Welcome to Possumlady Place and thank you for the kind comments!

Hi GJ! How are things in England? Any snow where you are? You must stay nice and warm with so much floofy fur.

So happy to have found this blog!

I am in the same snow band - with round #2 on the way...read this post and kept reading.

Enjoying the blog very much!

Brace yourself--another storm on its way for Tuesday and Wednesday.
Hope you continue to have power.