Since the start of this snow storm and the aftermath, before I go to bed, I always put out a fresh bowl of dry kibble on the front porch with some hot water in a bowl (so the water will not freeze so quickly). In the morning before I let the outside kitties out to release some of their energy, I take a quick peak. If no food has been touched I open the door and let them out. This morning I took my quick peak...nope, food is still there and doesn't look touched. I opened the front door and made a quick look into the little cat igloo. Imagine my surprise when I saw two golden eyes staring back at me! It was Pyewacket!! Oh, was I relieved!! Well, the outside kitties would have to wait as they would have chased Pyewacket away.

I opened a can of wet food and slowly and carefully opened the door and quietly walked outside talking gently to him. I waved the food past the igloo opening so he could get a wiff and put it down and quietly backed into the house again. I watched as I could see him licking his chops. He then struggled a bit but got out of the igloo (that is up on a wicker chair). He does not look good. He looks very thin and has leaves stuck to him. He has a wound on his back leg and will not put any weight on one of his front legs. Yesterday was the first day that I dug out of my driveway to the cleared street, so it was obvious he was across the street the whole time yet had no way of getting to me until he had a clear path. Poor, poor thing.

With our offices closed again today and a major storm approaching by the end of today, I had one objective. To try and get to a supermarket and stock up again. Now I have two. I'm going to try and get Pyewacket into my cat carrier and bring him over to my neighbor's where she has a caged cat condo. At least there he will be safe and warm. We will bring him to the vet once the weather clears and go from there. Since he is pretty feral, if we find that he has a broken leg or other serious issues that would require daily pilling or other medication, I hate to say this, but I think the best thing would be to have him put down. He is clearly not happy and not able to fend for himself and with the weather as bad and cold as it has been, it could be the most humane thing to do. On the other hand, If he just has an infected puncture wound of some kind that will heal up we may just keep him inside until the weather gets better and the snow melts and he is able to walk again.

So keep your fingers and paws crossed for Pyewacket, or as I call him "my little hissy boy".

Update:
Well, it's good and it's bad. I watched Pyewacket struggle down my front porch steps and down my walkway to the street. With a bad front and back leg it was tortuous watching him struggling to get across the street. As luck would have it he made it back to my porch about 20 minutes later and jumped up into the little igloo. I then cautiously brought my cat carrier out and put the opening up against the opening of the igloo and tapped on the igloo and out popped Pyewacket into my carrier. My neighbor called our vet and he was at his clinic. I decided to bring him in then and there. The vet looked at him and said given his unknown medical history regarding shots and the look that he was in a major fight with most likely a raccoon, they put Pyewacket down. I feel bad but honestly I mostly feel relieved. He is no longer struggling to survive in pain and in the freezing cold. I honestly don't know how he made through this last storm with those injuries and with another coming later today, I think it would have been too much for him. So goodbye Pyewacket. At least you got a good meal and was able to quench your big thirst for water, along with being safe and warm for your last hours. Your life had meaning and I'm glad I was able to share some of it with you. 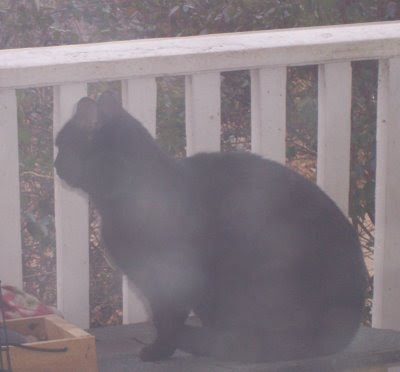 Photo of Pyewacket taken a year ago when he first started coming to my porch for food. The photo was taken through a storm door since he would not allow me to get close to him.
Posted by possumlady at 2/09/2010 07:59:00 AM

Fingers crossed for the little hissy boy - poor little fellow! I worry about all the poor animals struggling to survive out in this crazy winter. I hope that there's nothing terribly wrong with Pyewacket and that he's feeling better soon!

We are keeping our fingers and paws crossed for him - we always worrry so much about the poor animals that live outside, but especially when the weather is bad.

I'm so sorry for your loss. But as you said, Pyewacket is no longer in pain. Thank you for taking care of him and braving the streets and getting him to the vet.

Oh, Christine, how sad. I know what you say is true--that given his circumstances this was best for him. But it is sad that there are so many stray cats that have to fend for themselves and get into these situations. Lord knows, you do so much for them. I'm glad you can take comfort in that.

Christine--you are so right that you did the very best you could, gave him food, warmth and safety--but you couldn't change his being feral, the real cause of his hard life.
I have only cared for one feral cat--he took to our (then) dog, and I capture the kitty that way, hauled him off to the vet, hand him neutered. The vet said to keep him indoors while he healed, but after 4 days of his gazing longingly out the window, I gave up and released him. He came back a day later, and then disappeared. I have never seen him again.

Bless you for your care & compassion for Pyewacket. I wish there were more people like you on this earth. Pyewacket is now on The Bridge, warm, healthy & loved.

so many vets just put them down...i rescued a feral and she had kidney problems and he was going to charge me 100+ per day...so we put her down. went to another vet and he said many cats recover and they would have charged only 35 per day...your poor kitty was so beautiful. so sorry. but he is in heaven now. animals are so precious. i hate to see suffering!