Living in a multiple cat household can be challenging at times. With the newest cat (Oliver) being brought into the herd back in 2006, everyone is more than used to my routine and what is expected of them. With the exception of my occasional travel and the occasional mouse, you would THINK things would run pretty smoothly.

Yet, all it takes is one cat getting into something to throw the whole household into a frenzy. Such was the case last night. The day started well. I had done some more spring clean up of the yard and had finished laundry and a kitchen clean up. I got all the cats in the house by 9:00 (the wind and rain really helped with that) and was hoping for an early night. In fact, I was in bed by 11:00 (quite early for me) and had fallen asleep for about 15 minutes before all hell broke loose.

First I heard things falling over (hmmm, a cat must have gotten into the tv room closet), then I heard what sounded like a bunch of ping pong balls dropping and bouncing (okay, what the HECK is that), then I heard a cat screaming and a whooshing sound with what sounded like something substantial being knocked over. By this time, if there were any cats on the bed with me, they had all jumped off to investigate. As I threw the covers off I yelled out "WHAT THE HELL IS GOING ON OUT THERE!!" Complete silence. I'm now standing by the side of my bed wondering if I should check it out now or just wait until morning to see what the damage is. Since I've had a few recent mouse experiences I decide to check it out in case that is what all the fuss is about. I stomp into the tv room, look around and take a moment to try and figure out what happened.

What I can make out is that Chunky Lisa opened the closet door and while trying to jump up on the boxes, pulled them down instead. One of the boxes had my miniature Christmas ornaments, that included a bunch of tiny red glass balls that were now scattered all over the floor (ahh, the ping pong ball sound), with other cats now joining in batting the balls around. Chunky Lisa was up straddling the back of a chair with the look of a crazed animal. Somehow she had gotten her head through the handles of a large red plastic bag from Target that now was draped across her back like Superman's cape. (Okay, that accounts for the scream and whooshing sound.) She must have been frantically running around trying to get rid of her "cape" and in doing so knocked over the table lamp.

Stifling a laugh I quietly yet quickly walked over to Lisa who looked like she was about to bolt, removed her cape, picked up the glass ornaments, closed the closet door and went back to bed.

And people wonder why I have such dark circles under my eyes... 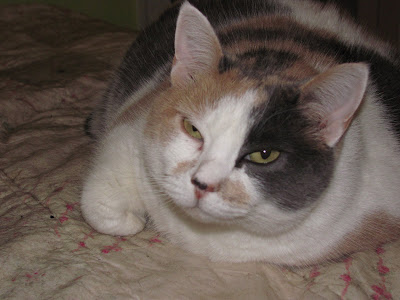 Without any visual proof, I vehemently deny the allegations about me in the above story (although the red plastic cape WAS pretty cool)!
Posted by possumlady at 3/29/2010 12:26:00 PM

OMG, I'm glad I wasn't drinking anything when I read that, LOL! Ah, life with cats....

LOL i had to laugh reading that. We have taken to confining our cats to the kitchen at night for their safety and our sanity.

Even so there will be a loud crash that I will have to get out of bed to investigate. Thankfully no superman cats as of yet.

I also yell. 'WHAT'S GOING ON DOWN THERE?' as if they would answer me back.

Yep, I totally relate to this. And I also have been known to try and find out what is going on from the cats, when I know full well they won't answer back. I usually just leave whatever it is until morning, unless I hear actual breaking noises!

I'm SO glad I'm not the only one dealing with this!!

Another episode last night. It was a warmish night but very windy. Got all the cats in but ONE--Figaro. Called and called but finally had to go to bed. I woke up to the wind blowing over a trash can at 2:20 am and remembered Figgy was still outside. I get up and stumble for my robe, go out on the front porch and start calling him again (I'm sure the neighbors loved it!). Waited outside for about 5 minutes and decided to come back in. Closed the door and took one last peek out the window and there he was, on the front porch, grooming himself like he had been there all along. I opened the door and rather curtly told him to come on in. He s l o w l y stood up and sauntered in the house, pausing of course right outside the door to give himself a good scratch--argh!!!

Oh my--maybe you should just scatter a few ping pong balls around before you go to bed--you know, give them the toys, so that don't have to get them out on their own.

Wow - you kitties had a very busy night! We're glad that everyone is okay and nothing got broke (tends to make the momma's upset when that happens).

Have a fun rest of the week!

That was one wild night - we have had the cats step on the TV remote and turn it on blasting full sound in the middle of the night. Of course we bolt up and run to see what is going on! Never a dull moment!