That may be a bit melodramatic, but my God it is just plain gross outside. And, no, I'm not one of those people that complain in the winter too. I always pray for cold weather. I'm a native Minnesotan after all. I went to bed early last night so awoke at 5:00 am today. I just checked the temps outside and it is 81 degrees with 81 percent humidity which makes it actually feel like 87. 87 degrees at 5:00 am!!! That is just plain wrong. I replaced my roughly 25 year old central AC a few years ago but I still worry about it breaking down. It just never seems to stop in this weather. But, I should consider myself lucky. There are still many homes in my town and neighborhood without central air and folks make due with a couple window units. Heck, I moved to DC in 1982 and I didn't live with air conditioning until the summer of 1992. My first car with air conditioning was bought in 1997! When I bought my cute little two-seater Honda CRX in 1986, I opted for a sunroof instead of AC as I couldn't afford both. Yes, fashion over comfort in those days.
Well, that is all I can think of to say in my heat-induced stupor this early in the morning. I'll leave you with a couple cute photos. The first being a black cat samich with a sweet butterball fillng: 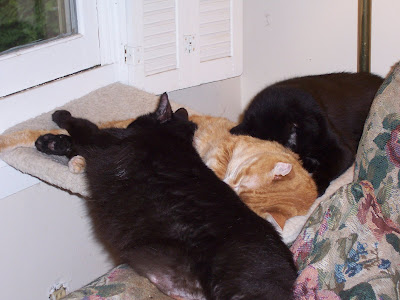 The little cat ledge that they are all sleeping on is right above a vent with nice cool air blasting out of it. Left to right: Woody, Butterball, and Apu. 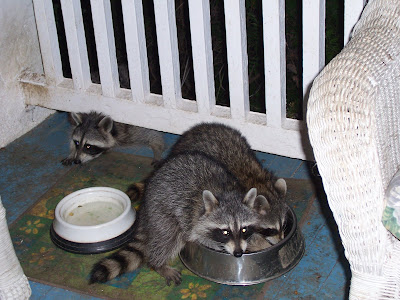 My little woodland babies have returned last night. Look how dirty they make everything!!
Stay cool and safe everyone and remember to drink that water!!!
P.S. Today in the Washington Post there was a story about the heat. The article mentioned a heat wave in 1930 where it hit 100 or above for 10 days out of 21. Then it went on to state:
********************
The 1930 heat wave was the cause of what The Washington Post called "unusual happenings":
A woman living in an apartment on 10th Street NW shot and killed her husband when he refused to give her money for food. She blamed the heat. The morning she pulled the trigger, temperatures in the couple's apartment had reached 110 degrees, she told police.
Chickens that had been entered in an egg-laying contest at the University of Maryland Experiment Station were listless. Yields were disappointing.
A 16-year-old Virginia hunter collapsed after being overcome by heat and shot himself in the head with a .22 caliber rifle. The ball knocked him out but only inflicted a scalp wound, the Post reported.
Thirteen-year-old Betty Allen Conner of 5535 30th Place NW had her own unique take on the oppressive heat of August. In her poem, "Heat," published by the Post on Aug. 3, 1930, she wrote:
" We call out, we ask:
'Give us a winter day,
A frozen, icy day.'
But the sun,
The mighty, golden, burning sun,
Only laughs,
And, dizzy with its power,
Overwhelms the city and man"
**********************************
I couldn't have said it better myself!
Posted by possumlady at 8/08/2007 05:26:00 AM

My northern upbringing makes me long for home in these hot humid days, too. I don't "do" heat well. Just grit your teeth--I keep telling myself.

The black cat samich--how cute. Also, those raccoons are too much! I enjoyed the bits from the article about the heat wave of 1930. We are so fortunate to have air conditioning now (at least most of us). I can't imagine what people who work outside do on days like today. There was a story on our local news tonight that in a restaurant kitchen it was 120 degrees!

Your title made me chuckle--oh the humanity!
I am with you on loving winter.
Aww--love the kitties. I have two but they don't get along. They are always vying for which one gets me! I keep telling them--I love you both.

I could not have said it better myself, either! The 1930's heat wave events were entertaining :o)

I don't think my parents had A/C until 1966 - one window unit. We survived without A/C and I've always enjoyed summer. However, my post menopausal state causes me to overheat too easily and as I type this, I know I'm dehydrated. I spent an hour outside last night and probably lost 4 pounds of water. It's disgusting!

Your cats are enjoying whatever coolness they can get! And what about those darn raccoons? Scavengers!

Nina: I like that. I think I'll use that when someone asks me how I am, I'll just say "I don't do heat"

Cat59: we have a building going up right next door to the office and it literally makes my stomach ache watching them all work. Yesterday, as it topped 102 in the afternoon, they were still working away in their long sleeve tee shirts, heavy pants, work boots and hard hats.

kgmom: I am lucky that for the most part all my cats get along. But if I start talking sweetly to one, watch out! It's like a stampede of kitty paws as they all try to get some attention.

Mary: growing up in Minnesota only the wealthiest neighbors had AC, and we were not among them! And, Minnesota can also get pretty darn hot in the summer but the humidity level is definitely not like it is here on the East Coast. We had ONE box fan that we kept in the living room while we watched tv. Then it went upstairs to my parents room because "your dad needs his sleep so he can get up and go to work." They would also close their door at night and I remember many nights taking my pillow and laying right next to their door to catch the breeze from the fan from under the door!!

I had to laugh thinking of that cool air coming from under Mom and Dad's door. Do you remember the little green fan that Dad pointed towards the ceiling so the air could bounce around?

Our monsoon is taking a break, It was only 90 the other day but 108 today with 18% humidity here in AZ. The mornings a beautiful in the upper 70s and dry. Too bad I only enjoy them as I walk into work.

Oh I fogot mom and dad's anniversary! See, the heat will do that to you. I seem to vaguely remember the little green metal fan. Thanks for the comments and say hi to everyone in Minnesota!