A Sad Sight and a Cat in a Box 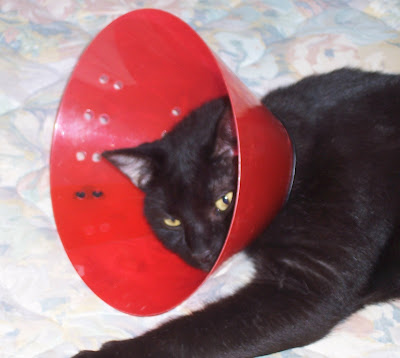 A little over a year ago, Woody started licking himself raw on his back legs and his stomach. This has consumed my life for many days and nights. Not only is it painful and aggravating for him, he has ruined many of my things from just sitting leaving an oozing, sticky mess. After ruling out food allergies, and labeling it a non-defined allergy, two different vets prescribed a multitude of shots, pills, ointments, sprays, etc. Absolutely nothing has worked. I even went so far as a vet prescribing a valium-like substance that also acts as an antihistamine that I rubbed into his ears to be absorbed since he was so hard to pill. This slowed down his licking but it never stopped. I also tried many different homeopathic drops and shampoos, again to no avail. The "collar" has always been the last resort. Well, actually I did try a collar last year but felt SO bad for him that I took it off after a few hours of watching him stumble around banging into everything. 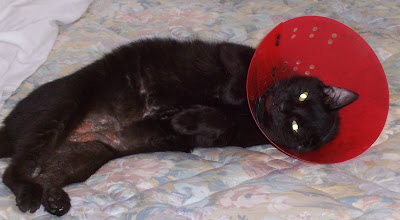 Can you see his red belly. Actually, since putting the collar on this past Friday, everything has scabbed up nicely.

I was at Petsmart on Friday and looking over yet some other miracle anti-itch medication I decided enough was enough and I needed to get the collar back on him. Since I would be off for five days I thought it would be a good test. Oh, it has been hard. I guess I should consider myself lucky. Woody is so dog-like that he doesn't go beserk with it on like I would guess my other cats would. In fact, I've been giving him lots of extra attention and catnip and he seems pretty content. I do take the collar off a few times a day when I watch him like a hawk. Cats groom themselves all throughout the day and I know it was driving him crazy not being able to wash his face after eating. So I let him jump in my lap and he starts grooming himself like mad. As soon as he starts licking his back legs though the collar has to go back on. I have no idea how long it will have to stay on. Wish us luck!!


Now, onto something silly. What is it with cats and boxes? Everytime I get a box, no matter how small, all the cats try at some point to jump, lay, or squeeze into it. For my birthday, I decided to get a memory foam mattress topper. I used it for the first time last night. I must say I hadn't slept so soundly in a long, long time. And, I woke up refreshed, so I'm really pleased with it. It's a Serta brand and I got it at Target. It came in a good sized box and I always let the cats play with the box until the next trash day. 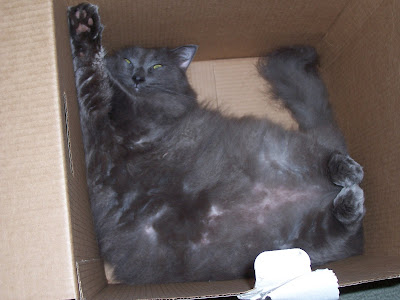 That is a great photo of Sweet Pea. Animals are so entertaining. Except when they are exasperating and you are worried about them. I know it's hard to keep that collar on him, but I think you are right to try to stick with it while you are on vacation. Good luck to you and Woody!

Poor Woody is right--I have never seen a cat with a collar on. And you are so right about cats & boxes. I think it is curiosity combined with a desire to be in small protected places.

Awwww. Poor thing :o) Those lampshades make me laugh but also make my heart break... I'm sure it will be worth the effort!

My cats always loved boxes and grocery bags. I really miss kitty fun. Dogs are great but cats are so intriguing and fun, especially when there's a catnit toy nearby...

Well, it has been a whole 10 days and Woody still has the collar on. I think we are both getting more used to it. Problem is, he can fanagle it so that he can STILL lick one little part of his leg so that part is still not healing!! Sooo incredibly frustrating. His belly though is looking good, the scabs have come off and it is not so red anymore. Although it is still sad seeing him walking around with his head bowed he actually has been in a great mood because his mommy is not mad at him messing everything up and actually ENCOURAGES him to jump on her lap (I often think the only goal in Woody's life it to somehow become permanently attached to my lap).

Oh, and the catbox is gone. Trash day was yesterday and although I did contemplate keeping it for another week as they all loved it, the house is too junked up with overflow from my bedroom and something had to give!

Oh poor little thing.. Those cat hoods drive my ones nuts.. They go round and round.