One Goodbye and One Keep in Touch

Many of you know that I look after a herd of cats. I have four cats of my own that are strictly indoor cats. Then, there are the outside ones. These are cats that have migrated over from my neighbor's house. My neighbor is known throughout the area that if you have an animal in need, she will take it in. There is a low-income elder community close by and my neighbor helps many of the folks there with their animals, i.e. bringing their animals to the vet and sometimes paying for the visits, getting them pet food when otherwise they could not afford it, etc. Many times when a person dies, the animal is left with no place to go. Such was the case with Buddy. I can't even remember when Buddy started showing up outside. Beautiful Maine Coon mix. The problem with Buddy is that he is a bully. He was very sweet to me and so craved human attention that he would drool buckets whenever I spent any time with him. But then, something would click and he would just want to hunt down any other cat and would do some serious damage. I kept a supersoaker on my front porch just for him. 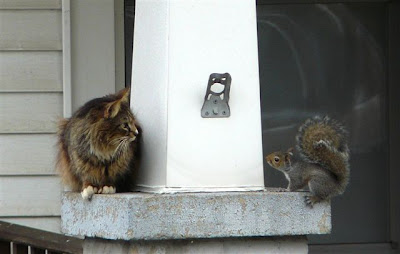 Here he is on a neighbor's front porch giving a squirrel the hairy eyeball.
Every once in a while I would catch him, crate him up and deliver him to my neighbor asking if he could be kept inside to keep the peace in the neighborhood. She would keep him in for a while, then he would somehow sneak back out. One of the times I picked him up I noticed he seemed awfully thin. I mentioned that to my neighbor on numerous times. Finally, before I went to Puerto Rico, she said she now had the time to take him in to the vet to get him checked out. She suspected a thyroid problem as two of the symptoms are lost weight and aggressiveness. 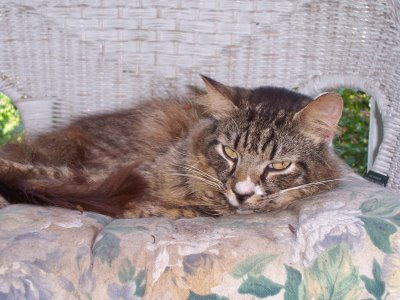 I took this photo of him on my front porch just a few weeks before heading off to Puerto Rico.
When I returned, I noticed Buddy wasn't around so I assumed my neighbor had him in her house. Last week, I asked her how he was and she said she had him put down while I was in Puerto Rico. She had him tested and he did have a serious thyroid problem that would have cost a ton of money to manage. Poor Buddy, he didn't have much of a life here after his owner died. We just couldn't find a home for him. But, his life did matter and I'm glad I got to know him and give him some much appreciated attention.

Then, there's Jelly. Short for Jellicle. Jelly was found at the Elder community way back in 2001. The residents there were feeding her. She had had a litter but no kittens were ever found. My neighbor took her in--spayed her and gave her all her shots. Jelly is very cute, black and white and tiny, about 5-7 pounds, but a real hell raiser. My neighbor tried adopting her out on three separate occasions, only to get her back because Jelly would go beserk in the houses and try to escape. She even broke out of my neighbor's house on numerous occasions, pushing out the screen windows and doors. On Christmas Day in 2002 I woke up and looked out my bedroom window. It was a miserable day--cold wind and sleeting. There on my porch railing was Jelly, soaking wet, staring at my front door. I opened the door and she came trotting in, meowing the entire time. My four cats were quite perplexed but they gave her a wide berth. She ate a few bites of cat food, used the litterbox, then headed to the door. I let her out and she ran off. That began our relationship. She started coming by regularly twice a day for food and attention, but then on her own time, would want to leave. Let me tell you by 2003, I had tried so many times to make her an inside only cat. I've done it before with Woody and Sweet Pea. Jelly was another animal all together. She would come in to sleep only on the coldest of nights.
Then, I noticed in early summer she was coming by less and less frequently. I would call and call and she would show up maybe a couple days later. I have a neighbor living next door to me, Doug. He's in his mid-60s, lives alone except for an ancient cat named Winston. Doug came by one Saturday to tell me that Jelly had been spending a lot of time with him and Winston. I was pleased that I found out where she had been going, but I also felt just a tiny bit hurt. Literally a week after Doug came by, he stopped by again to tell me that his beloved cat Winston died in his sleep. Winston was one month short of his 19th birthday! Well, Jelly has been at his house ever since. I told Doug he has just been adopted. 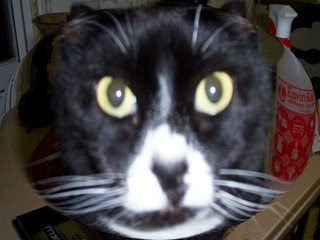 Aren't cats amazing how THEY pick people. My husband is most hurt that our one cat doesn't want him to pet her.

With all of your interactions with cats, you have some sad stories and some happy ones. You are a haven for them, no matter how long they live or how long they stay.

I just found you on Julie Z's blog link. I am a cat lover without a cat. I guess thats why I enjoy reading your blog. I lived on a farm for many years and I must have had a hundred cats (not at one time). My porch was always crowded with barn cats and there was always one or two that made it inside. When I moved 7 years ago, my husband said no cats and I miss them so. I will visit with you and your cats.
Rachel from PA

My DH and I are also cat lovers and have rescued a bunch that we keep inside. They are all precious, all have their own personalities and are like our kids. My heart goes out to you on the loss of Buddy. Kudos to your neighbor for taking good care of
Jelly.

kgmom: Yes, they are amazing. Once when I was lamenting to my vet about all the stray cats and the horrible people that let them go or dump them off somewhere, she didn't think that was the case. She believes that cats, being the picky animals that they are, just leave when they don't feel comfortable where they are living and seek out more suitable living arrangements. I just wish they wouldn't all choose MY house!

Cat59: I think I could write a book about all the cat tales (tails?) I have. A co-worker was serious when she told me she thought I should file for tax exempt status since I operate a "sanctuary"

Hi Rachel from PA! Welcome to Possumlady Place!! Stop by anytime you need a cat fix. I'm sorry your husband won't let you have any cats. I guess there are reasons I'm single ;-)

Dorothy: I'm glad there are other softies out there who can't turn their backs on homeless animals. They are so appreciative, but it is SO exhausting sometimes.

You probably have many more cat stories to tell. Sad, goofy, wild. I had many cats at one time so I know them well. Those who start out loving outdoors never are content to be inside. My cats came to me as kittens and were "indoor" cats. They looked ridiculous when I took them outside with me.

They are good company!

A day early, but Happy Birthday!

Thanks for the birthday wishes Mary!!