Many of you know I’m a big fan and supporter of The Elephant Sanctuary in Tennessee. Over the past three weeks I have been checking the website multiple times daily for updates on Delhi. At over 62 years old, Delhi is the oldest elephant at the sanctuary and is in the process of crossing over.

Delhi was captured in the wilds of India over 55 years ago. Her entire captive life has been spent traveling and performing with circuses. She arrived at the Sanctuary is 2004 after being confiscated by the USDA from the Hawthorne Corporation that had been cited for many violations of the Animal Welfare Act. She came to the Sanctuary with a terminal foot disease and her prognosis was grim. Many vets who examined her said she would not last very much longer. Well, Delhi proved them wrong. She flourished being exposed to other elephants, good food and excellent care. The most important thing, she was free. Free to do whatever she wanted. Free to explore 2700 acres of the Sanctuary.

Elephants, by nature, only sleep around four hours a day, taking little half-hour ele-naps throughout the day. This can be done by either standing or lying down. One of the reasons for this is that because of their size, when lying down, they can injure their internal organs if they are down for a long period of time. Delhi’s caretakers became concerned at the end of January when Delhi went down for a nap and did not rise for 24 hours. What follows is commentary and photos from The Elephant Sanctuary.


Delhi settled in for another of her long naps early Thursday morning and has not risen. The option of lifting her in a sling was discussed and rejected due to Delhi's advanced age (62+ years) and terminal foot disease. Alternatively, it was decided to keep her comfortable and pain free while supporting her through her process. Last night, Misty took turns sleeping next to Delhi then protectively standing over her while Delhi slept. All of the elephants remain calm and peaceful in Delhi's presence. She is eating, drinking periodically and seems quite content. We switched her pain reliever from banimine to ibuprofen today. She was amazing. The grand lady, who in the past would clamp her mouth shut tight and refuse to accept nasty tasting meds hidden in any medium, graciously accepted twenty-five apples and oranges, mostly oranges, with one 800mg ibuprofen pill in each one. She savored the fruit, then stretched, rested, savored the next and then stretched until each of her pills were eaten. Lauren, Kat, Scott, Mary, Carol, Misty and Dulary continue to shower Delhi with love and constant physical attention. Delhi is an angel, we are so blessed to be in her presence. She may be leaving us from this physical plane but never will she leave us from the world of wise souls, watching over us as we continue our work for her and her sisters. Please send light and peaceful thoughts of acceptance for our Grand Dame. True to her advanced species she would not want us to worry, because worry is wasteful—instead of worry, send love. The most profound thing you can do for dear Delhi right now is to open your heart in love and acceptance. 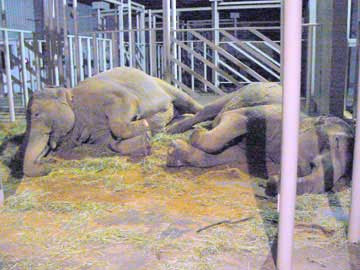 Misty, never leaving her side, sleeping next to her best friend Delhi

Although Delhi was showing no signs of discomfort, we decided to be proactive and bring in Dr. Mikota to do acupuncture on Delhi to help move her bowels. Delhi was awesome, accepting the treatment with only a couple of comments—the guttural verbalization she makes to remind her caregivers that she is in charge and calls the shots. We all reassured her that she indeed is still in charge. A few hours after the acupuncture treatment Delhi received a warm water enema. After about twenty minutes she began to defecate. Again, she was calm and showed no pain. Acupuncture and warm water enemas are a gentle way to stimulate Delhi’s bowels and seemed to be a good treatment combo for her. Her system is slowing down as she gracefully moves through her process. Caregivers continue to shower Delhi with love and care, taking turns being with her 24/7. 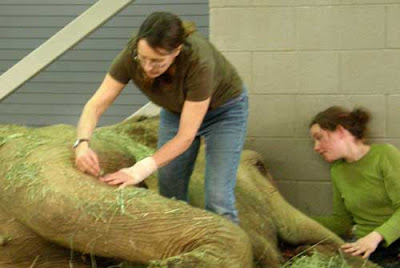 Our sweet Delhi continues to rest comfortably in the company of her family. A friend sent wonderful flute music for us to play for Delhi. She has been incredibly relaxed and perhaps this music is helping. All of the girls have been peaceful, keeping the energy in the barn very mellow. Today Delhi’s preferred foods were watermelon, cantaloupe and grapes. It seems what she craves changes from day to day. Her caregivers find great joy in providing treats that she savors. The back of Delhi’s stall has become a loving display of photos, candles, elephant figurines, flowers and a Tibetan prayer flag. The gifts have appeared unprompted over the past week, gifts of love from caregivers and other staff members. Delhi has given us so much over the past few years and today she is teaching us to live in the moment; no projection, no assumption, no worry—just Delhi with us in this very moment.

Delhi got a facial of sorts today. She has developed two small pressure wounds on the underside of her face, a place that is quite difficult to get to. This morning two of her caregivers removed the shavings and hay that were under Delhi’s head so they could flush the wounds and apply medication. Getting underneath Delhi’s massive head is no small feat since she only lifts her head for about a second at a time while shifting.

So Mary and Kat made a kind of game of it; with one person on one side of Delhi’s head and one person on the other—just like in the summer when the caregivers would help Delhi swat those big pesky horse flies that always seemed to land in the places that Delhi could not reach. Each time Delhi lifted or shifted her head, the caregivers reached underneath and grabbed out handfuls of shavings and hay. As they laughed, Delhi smiled. When the entire area around Delhi’s face and head was clean, they slipped a flake of hay under her head to give them access to the underside. This way they were able to access her eye and the small abrasion next to it. The caregivers talked to Delhi explaining exactly what they planned to do and how. They told her they would clean the wound with saline that had been warmed, for her comfort it was not cold and that they were just trying to help. Delhi not only was fine with the medical attention, she seemed to want to help out. As her eye and abrasion were being flushed she would lift her head to give better access to the area and lean into the warm-water washes of her eye. All the while, not paying attention to food treats, just engaging her two caregivers in play and assisting them in their job of caring for an absolutely amazing girl.

She really never stops amazing us and reminding each of us just how wonderful she is. It’s indescribable just how full she makes your heart feel.


In her time....for Delhi, by Merilee Newman
The light grew stronger, but the sleeping beauty was not yet ready toopen her eyes and see the glory the light brought with it. She could feel the warmth provided by the light and the love of those who surrounded her. Neither energy pulling, merely there, allowing her to choose her path. She could sense the souls of those gone ahead and those souls caring for her now all telling her that she could choose her own time. Rise or fly...One would sadly let go, and the other would gladly receive..
In due time...In her time 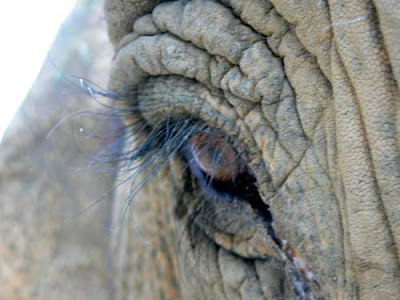 Such a magnificent life.
So lovingly cared for.
Touches my soul.

Nina, thank you so much. I'll stop right over to your site.

Yes, considering the horrible lives these circus elephants have had, it is amazing how trusting they become when they get the love and respect they deserve (and the space they need to roam and feel comfortable). The Elephant Sanctuary is truly heaven on earth for these tired, neglected souls.

Oh, Possumlady--so touching. I admire elephants greatly--and am appalled at how cruel we humans have been far too often.
I think in a previous comment I mentioned how I learned about the Elephant Sanctuary. It is now one of the organizations I support.

Kgmom, yes I remember that you know and support the Elephant Sanctuary. I'm so glad that you do!I've never met another person who has ever heard of it, except through my informing them.

Oh, Possumlady. This account of Dehli's final days is both heartbreaking and uplifting...

"Each time Delhi lifted or shifted her head, the caregivers reached underneath and grabbed out handfuls of shavings and hay. As they laughed, Delhi smiled."

I just loved this. She was sweet through it all.

I have come in by way of Nina and so thankful that I did!Possumlady this post brought me to tears and I am sure many others! Elephants are my absolute favorite creature that walks the earth and I am filled with emotion as I read this story. I have NEVER supported circuses for this reason .. the suffering that Delhi experienced.! I am so pleased that in her final days she was blessed and showered with so much love and given the dignity and respect that she so deserves. Peace be to Delhi. It was meant for me to find my way to Delhi and say goodbye. Beautiful moving post! Thank you! hugs NG a lover of all Nature.

Hi Naturegirl and welcome to Possumlady Place. All are welcome here! I'm glad the story of Delhi touched you as it has touched me.

If you have not already, please visit the Elephant Sanctuary's website at elephants.com so you can see the absolutely wonderful and critical work they are doing for elephants. Also check out the website for Circus Reform Yes (CRY). Based in my home state of Minnesota, they are working with local city council's to ban wild animal circuses from performing.

Thank you for sharing this beautiful story, my tears just flowed. The peace and love embodied there is an inspiration. Delhi is a noble being with such grace in her life and beyond.

At The Elephant Sanctuary web site, I looked for the commentary updates like you posted here but didn't find the right section. Can you tell me how to locate the them ? Thanks !

Hi Sara, when you go to the website, click on What's New. Then up at the top you will see a green bar. Move your cursor to Our Elephants. That will bring down a menu. Click on Asian ele-diary. Let me know if you have any problems.

Thanks so much for your help. The work that the sanctuary is doing touches my heart.