Time to take a cat for a ride

This morning I took Butterball back to the vet to see if the two weeks on antibiotics and an anti-inflammatory has helped or if I had to decide that he needed dental work done that would entail putting him under. 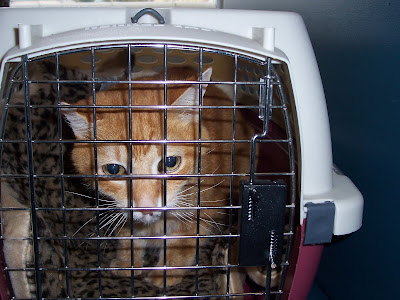 Is there a sadder sight than a cat in a carrier on his way to the vets? I don't think so.

I was a little weepy all weekend thinking that I would need to make the decision to get dental work done which at his age and his problems with breathing could be very dangerous. I really wouldn't have a choice. I certainly don't want him to be in pain. I always think the worse in these instances and ride out the scenario in my mind until the sad ending. Somehow I always think this will make things a little easier.

So I was shocked when the vet looked at his mouth and said that it looked great! In fact, he was quite amazed at how well he responded to treatment. Yes, he still does have bad tartar on his teeth but it doesn't seem to be bothering him. His gums were no longer red and inflamed but healthy and pink and he was eating well. My vet said we should leave well enough alone. Now if I could get him back to eating his good quality dry kibble instead of the Fancy Feast!! My vet said he was at a conference and one of his colleagues described Fancy Feast as cocaine for cats! It is very palatable and has a high fat content that cats can't resist. But, it is nutritionally complete, although with lots of artificial junk and colors. My vet said at Butterball's age, it really wouldn't harm him if he just ate that the rest of his life. But, I'm still going to try to add a few Science Diet kibble to his Fancy Feast and try to wean him off of it. 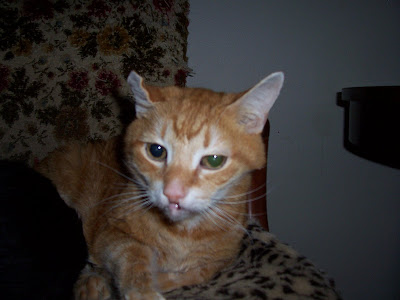 What a relief!
So glad Butterball is doing well and you're able to unworry.

I know what it is like to worry over a sick kitty! I'm so happy to hear Butterball is better.
You could try mixing Hills kibble in with a bit of his wet food and trick him. Maybe it would work?

Thanks for the kind words Nina. Well, I still worry :-) just not quite so much now!

DOROTHY! Welcome back. I'll have to check your blog. Thanks for visiting. Actually Butterball eats dry food exclusively. So I'm mixing a bit of the Science Diet dry kibble into the Fancy Feast dry kibble. It was almost half and half last night and he ate it all!

Great outcome for Butterball! Stock up on the Fancy Feast :o) My cats always ate Iams kibble but I'd add some Fancy Feast to urge the old ones to eat a little more. When one of my cats had an "aging mouth", I used to break up the kibble into much smaller pieces for her. Oh, what we do for our loving pets!