The Recall and Some Sillies

By now I'm sure you are all aware of the largest recall in the U.S. history. The undercover video shot by the Humane Society of the United States is truly stomach churning. The USDA which has oversight for the safety of the meat and also making sure the meat packing plants (slaughterhouses) follow the guidelines of the Animal Welfare Act, said this was an isolated incident. The Humane Society, on the other hand, said they just picked this particular plant at random. I have the sickening feeling that this goes on far more than not.

I wrestle with this daily. I am a meat-eater from the Midwest and I just don't know if I could give up meat entirely. But, I have decided two things. One, I have made the decision to eat less meat, including poultry. Instead of almost every night, I have cut back to 2-3 times a week. Two, I have made the decision that I will not buy meat from a store where I do not know how it was processed. I'm lucky that my farmer's market has a local angus farm that has a stall that sells meat, poultry and eggs. When they first set up their stall I asked how the animals were slaughtered. I won't go into details, but for one thing the animals are not trucked anywhere which is a big plus. And, they are killed on the farm in the most humane way possible. Only being able to buy meat once a week is not the most convenient, as just today I was thinking of making my family's recipe for hungarian goulash. Well, that requires stew meat and I will have to wait until next Sunday to buy it.

Another thing I have done was to go to the Humane Society of the United States and sign an email letter to send to the head of the USDA to stop the torture of downed animals and to keep them out of the food supply.

A fascinating book that has a chapter about the meat-packing industry and what simple measures can be taken to make sure all the animals are treated humanely is Animals in Translation by Temple Grandin.

I will close this subject with a quote from Albert Schweitzer "Think occasionally of the suffering of which you spare yourself the sight."

I've acquired a new housemate. I noticed him early last week. His name is Bob....... 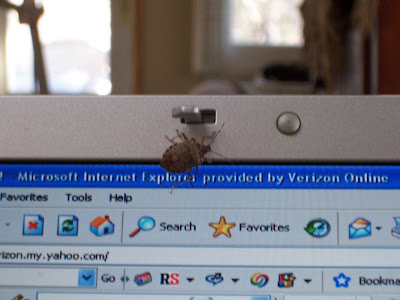 Does anyone know what kind of bug he is? I thought he was a box elder bug but no dice. In the past week I've fished him out of the cats' water dish twice, and almost stepped on him. One day I was sitting in the bathroom and something caught my eye and found Bob on my shoulder! I was a little peeved "c'mon Bob, can't a gal get a little privacy!" It's interesting that the cats leave him alone. If he is on the floor they will give him a sniff and walk away. I think he walks too slowly for them.

Now, onto demon squirrels. Last weekend we had some of the coldest weather of the season with temps going down to 18 one night. I put out extra bird seed and shelled and unshelled peanuts for the jays, woodpeckers and cardinals. Last Sunday I looked and saw three cardinals in the bushes near the dish with the shelled peanuts and wondered why they were not eating. Of course, there was a squirrel sitting fat and happy gobbling up the peanuts. It was so cold that I didn't even want to open the door so I was just yelling and waving and banging on the door. The squirrel turned to look at me and his eyes went from black to....well, look for yourself. 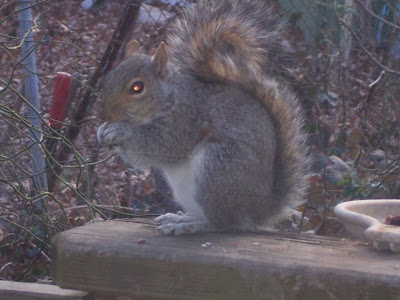 Are those demon eyes or what?! I slowly backed away from the door.

"Bob" looks like a species of Stink Bug (Pentatomidae). There are many varities and they protect themselves by emitting a foul smelling substance when disturbed. Maybe "Bob" could move to the garage. :)

Bob is a stink-bug. Apparently they give out a foul odor..but I have not noticed yet. They have been invading our house all season long. When the weather warms up, it gets worse..and I don't know how they get inside.

Re: the recall...I'm with you on the meat-packing and poultry industry. On our way to our vet, we pass by a slaughterhouse. I always get so sickened at the thoughts of those poor animals lined up to get off the truck and what they are facing. Although I have been a big meat eater in the past, as well as chicken-eater, I've learned so much lately about these animals and how they are inhumanely slaughtered. I also got the video on the internet and couldn't watch it. I too, although not a complete vegan, am leaning more and more towards that direction. I love your quote at the end..it's a keeper.

Oh, I forgot to add....since I learned about safflower seed (the squirrels don't like it)..I've been adding it to my bird feeders.
So far, I've not had a squirrel problem at all.

Hi Sara, thanks for visiting. A stink bug eh? Interesting as I have picked him up a number of times and never noticed any odor. And, the cats don't recoil quickly after they give him a wiff like they have with other stinky bugs.

Hi Dorothy, It does seem like it is awful early for bugs like that to be out and about. I'm glad you like the Schweitzer quote. His writings have had a profound affect on me.

I do have safflower seed but I put out the shelled peanuts because the jays and cardinals love them so.

Yep, a stink-bug. Get rid of him. I had them last summer.