My laptop crashed last weekend and I haven't had the time or money to deal with it yet. So, I've done the last two posts from work---ssshhh, don't tell my boss! Oh, and I guess this one too--double ssshhh!!
As next week starts the grueling task of gearing up for our April board meeting, I decided to take tomorrow off. I will not have access to a computer for three days. I'm actually not too freaked out about it. I didn't turn on my home laptop at all this week, which is a ritual for me as soon as I get up in the morning and during the evening hours. You know what, the morning was a bit hard, but having no access in the evening was most freeing.
I plan to spend tomorrow putzing around in my yard trying to clean up those d*mn seed pods from the gazillion catalpa trees that line my property. Oh I remember when I first moved into my little home, I honestly had never seen a catalpa tree before with their huge elephant ear leaves and they were blooming and I thought they were sooo cool. Now, to quote Jerry Seinfeld's sitcom mom, "I hate them like poison".
Saturday, I'll be going to the Pasta for Pets event for my local animal shelter. I'll make sure to take a lot of photos!
I'll end this on a happy note and a photo of Ned. Remember Ned? He was the bag-o-bones elephant that The Elephant Sanctuary rescued in November of last year. Ned has had his ups and downs at the sanctuary. He just wasn't gaining any weight and had a lot of stomach problems. Nothing stood out in all the blood and fecal tests they ran so it was a trial and error of testing what foods would work best with his system. Guess what finally worked---plain old cooked oatmeal! It took a while for Ned to figure out how to eat it, and like it, but he now scarfs it down a number of times daily and his digestive system has finally settled down.
Another thing that saddened me were the posts about Ned just standing in his yard, not knowing what to do with himself all day. I guess it takes a while to get used to being free and being able to chose when you want to go outside, or come back inside, or eat and drink when you want, when all you've known were chains and sharp bullhooks leading you around every day. He has a wide variety of elephant "toys" both inside and outside that he really had no clue what to do with them. 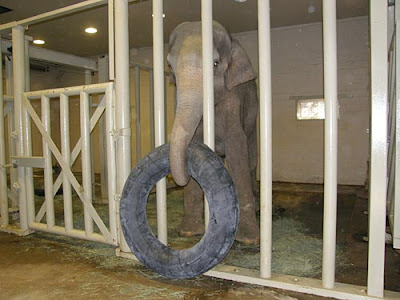 Well, that has changed. This is his favorite toy and he takes it with him everywhere! The problem (for the staff) is that he loves to stomp on it and deflates it several times a day. Wouldn't that be a great job? Yes, I inflate elephant toys for a living and I love it!!!

I love a story with a happy ending, especially one about an elephant. Ned is lovely.

Ugh - I need to do a lot of yard clena-up, too. Especially the flowerbeds, now that things are starting to come up!

Glad to see that Ned is doing better and is learning to play with his new toys!

Even though it's a forced break, enjoy! I've been staying away from the blog and facebook as much as I can - just a few minutes now and then instead of HOURS.

Yay for Ned! I can't help but laugh at that photo...