Sorry for dropping off the face of the earth last week. Things are starting to heat up at work and my home laptop is still not working.

Had a very fun time at the annual Pasta for Pets about a week ago. I received an urgent email from the rescue league a day before the event stating that even though I had purchased tickets beforehand, there would be no guarantee that I would get a seat!! With doors opening at 6:00 pm, I picked up my friend, Ms. Melody, at the subway at 5:30 and we were off and running. We arrived at the church around 5:45-5:50 and there was already a line to get in. I was not too happy when we got through the doors and saw all the filled and saved seats but we did manage to find a couple of free tables where we parked our coats. The spaghetti was good, not great (I’m a sauce snob. I don’t want my sauce to be the least bit sweet—and theirs was.) The salad was okay and the buttery garlic bread was pretty darn good. They then had homemade cakes and cookies for dessert.

Next it was time for BINGO. Good lord, I haven’t played in so long. It was a little more difficult then I remember. I mean, you want to chat, socialize and have a good time, then all of a sudden “what?!, what number did he call?! Are we still playing the red card?!”

Even with all the distractions, I actually won a game!! I was so excited, and just look at what I won…a package of five different kinds of garden gloves and a bag of spring bulbs! Woo Hoo!! 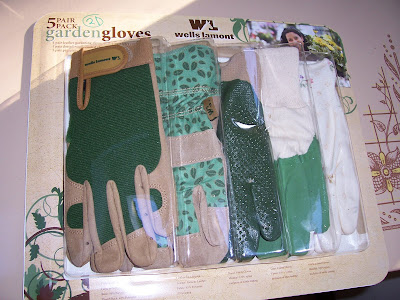 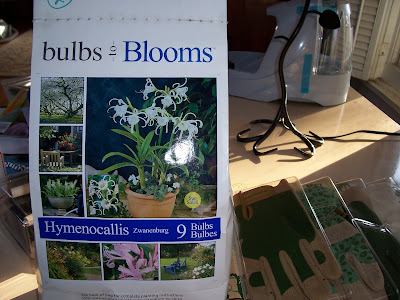 Then, early last week while Woody was sitting in my lap I decided to take a look at his teeth. I noticed last Fall that he was missing an upper canine. See, Woody is my mini black lab of a cat. Big and goofy and gregarious, never meeting a humine, feline, or canine he didn't like, and always banging or running into something/someone. So when I noticed the missing tooth, I wasn't too shocked and after I made sure the surrounding gum tissue looked fine I didn’t think anything of it. When I looked at the same area last week the surrounding gum tissue was swollen, hard, and white. Oh, this didn’t look good. Since my first cat, Mr. Bill, died of oral cancer that is always the first thing that pops into my head. I then googled oral cancer in cats and it said something like…Although it is typically found under the tongue, tumors can also appear at the gum line. It is usually caught too late when what you see are angry red nodules, but it starts out as swollen, hard and white…Okay, well that did NOTHING to ease my mind, thank you VERY much. I called my vet last Tuesday and he didn’t have an opening until today! The rest of the week and weekend was spent on a rollercoaster of emotions. “Oh, I’m sure it’s nothing. He is just too big and healthy” “Okay, he probably does have cancer. How much are you willing to do and spend” “Oh, poor Woody, now I feel so guilty for all the times I pushed you off of my lap and told you to leave me alone” “Waaaaahhh!” “Woody, even if you are sick, would you pu-leeze get off me!”

The good news is that he does NOT have cancer. The area is just swollen where the root of his canine still is. But, he does have gum disease and has sores/ulcers in the back of his mouth so he is on a course of antibiotics for 10 days. He was also given a prednisone shot and will be taking some new meds that might help his allergies. Woody has only known one vet that made house calls the first few years after I took him in as a stray. Since 2007, that vet retired and I started seeing my current vet. Woody never had an issue before and with so many cats, my budget does not allow for yearly check ups for all of them. So, I had yet to make an appointment for him. I was curious (nervous) to see how he would react in the carrier and at the vet. He was an absolute sweetheart. Did not utter a peep in the carrier and when he was placed on the metal examine table he walked over and headbutted the vet. My vet still remembering Butterball commented “you have the most calm cats of anyone I know”. I just smiled and thought “just wait until I have to bring Apu in--get the dart gun ready!” 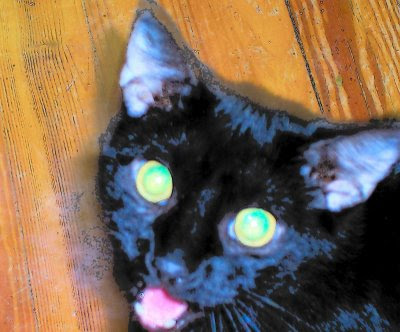 Woody: HEY, wanna be my friend?

I'm glad that Woody is going to be okay! He sounds like a big sweetie! And enjoy your gloves and bulbs - I'm impressed that you won!

I want to be your furriend!

I wanna be your friend Woody!

It looks like he's smiling in that cute picture.

It is so normal to think the worst when you discover some problem with a pet. I do it!
Glad Woody is ok.

With the weather we've been having, I bet your using your garden gloves and planted the bulbs. That was a nice prize to win.
So glad that everything's okay with Woody. He is a very handsome cat. Lisa

We are so relieved to learn that Woody does not have cancer!!! You had us very scared! We just lost a cat, Sissy, eariler this year to cancer and it is a horrible thing to have to go through...

We'll be keeping our fingers crossed that the antibotics take care of the problem and that Woody is doing good again in no time flat!