A little of this and that

I guess the hot weather has gotten to me. That, or deadlines at work because my mind has been drawing a blank as far as anything interesting to say. This weekend was a catch-up weekend. After not being able to do any errands last weekend I ran out on Saturday morning and stocked up on human, pet, and wild bird foods. Oh, and speaking of wild birds, I like my new screen feeder so much I bought another one this weekend! 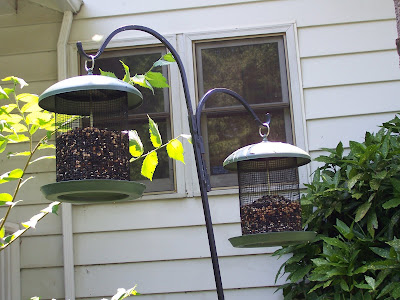 Unfortunately, the house sparrows have returned, but not nearly the hordes that would congregate at the tube feeders. The most I've seen are 4 at the screen feeders (as opposed to over 20-30 hovering around). I'm now getting mostly chickadees, titmice, nuthatches, cardinals, purple finches, and even a downy woodpecker. I know these are the usual backyard birds, but it is so nice to see them and hear their song instead of the incessant chirping of the house sparrows. I also jumped for joy yesterday. I kept hearing these aggravating baby bird screeches in the morning. I went out and looked up and high in my neighbor's massive oak tree were two parent bluejays and two juveniles, pretty much the size of the parents, but still putting on the "I'm just a witto, bitty, baby, please keep feeding me" routine. Just about a month ago when I took a week off, I found a fledgling baby jay in the middle of the street and put it back in the bushes where I knew it's nest was. The next day I saved another (the same?) baby jay from being the plaything of neighborhood cats. Since I've not seen any other jay family around, I'm assuming the two babies have now grown "almost" up. I feel like a proud auntie! 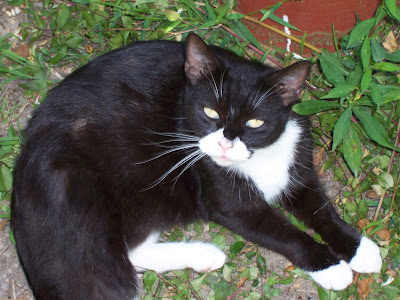 Figaro (aka Figgy or Figgy Pudding) keeping me company while I'm in the garden. He always has a perpetual sleepy look. 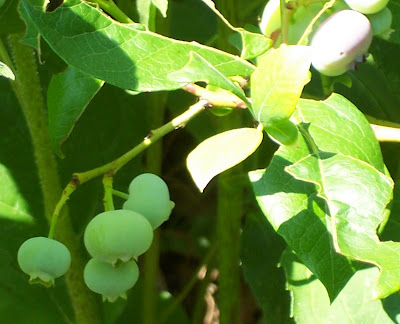 I would never call this a blueberry bush, more like a blueberry twig. It keeps hanging on, this is its 4th year and the few blueberries I have gotten in the past have never made it to this size. The mockingbirds have always found them. But this year they are being hid by....... 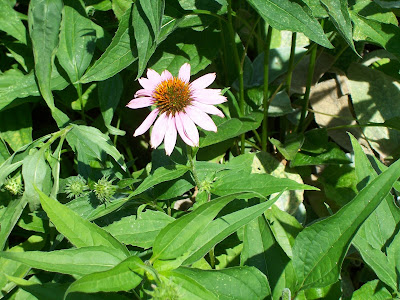 Lots and lots of coneflowers that are just about to bloom. This is the first. 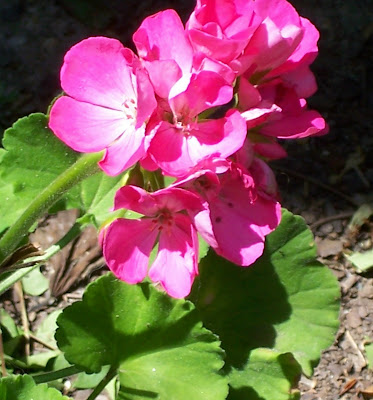 Did I ever mention that I love the color PINK! ;-)
Have you seen the latest issue of BirdWatchers Digest? It has Julie Zickefoose's wonderful phoebe painting as the cover! Interesting footnote about BirdWatchers Digest (BWD)...when I first moved into my home in 1998, I had NO money for anything. I had used up almost all my savings for the downpayment and it seemed like every paycheck went to things like garbage cans, ladders, rakes, etc. I literally didn't buy a piece of clothing (including underwear!) for over a year. But instead of going window shopping and drooling over clothes or shoes in malls, I would go to the closest Wild Birds Unlimited shop and drool over all the feeders, birdbaths, birdhouses, etc. The little store would have a big sale twice and year and the owners would put out their own old copies of BWD for FREE. I took whatever they put out. I remember thinking "when I have enough money, I'm going to get a subscription to this". Well, time passed and I forgot about it until meeting Julie Z for a talk at the National Zoo last year. I immediately starting reading her blog and low and behold found out her husband's parents founded BWD and her husband is the Editor! So, of course, I had to subscribe. I love the size of it. Small enough that I can carry it in my purse and read an article or two standing in lines or at the airport. The articles are fun and informative without being too scientific for us non-science chimp types.
One of the more informative articles in the latest issue of BWD has to do with Duck Stamps. Now, I always thought I was a pretty informed amateur naturalist. I just assumed duck stamps were sold to hunters so they could hunt ducks. Well, they are sold to anyone who wants to contribute to the National Wildlife Refuge system. According to the article by Paul Baicich, "In the almost 75 years since its creation, the stamp has raised nearly $700 million for the acquisition of more than 5 million acres of wetland and grassland habitat for the refuge system." And, many other birds benefit directly from the increased habitat. But, the number of hunters buying the stamps have stagnated or dropped. A number of birder organizations have stepped up to get members to buy the $15 stamp. The stamp will also get you into any national wildlife refuge for free! I'll be at my local post office in July to pick up the latest duck stamp that becomes available on July 1. Will you?
No update on the status of Maggie the elephant in Alaska. But The Elephant Sanctuary put out the following notice:
"The Elephant Sanctuary is pleased to learn that Maggie will soon be released from the Alaska Zoo. Many people have worked diligently to see that Maggie be moved to a more suitable situation; their efforts should be applauded. The Alaska Zoo has not contacted The Sanctuary regarding Maggie’s move but we are receptive to providing our expertise and facilities if they so desire, free of charge. The Sanctuary stands ready and able to assist in Maggie’s move in any way necessary. We know that wherever Maggie is moved will be of benefit to her. Most importantly, we are relieved to know that Maggie will not spend another winter in Alaska. "

So, like I said, just a little bit of this and that. I'll leave you with a photo of my latest windchime. I actually took a little video of it "tinklng" but I haven't figured out how to post videos yet. There is a reporter/columnist of the Washington Post that I like to read even though I usually don't agree with him. His latest subject was noise and what was considered noise and what wasn't. He thought all windchimes should be banned and those that have them should be fined. Thems fightin words in Takoma Park where just about every front porch has windchimes! 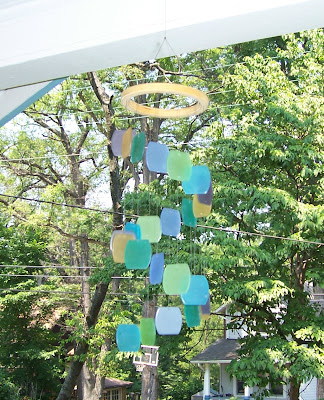 I love your wind chime! Dave told me we have a raspberry bush in our yard and there was one perfect rasberry on it today that he picked and ate. Said it was delicious!

This and That - my life in a nutshell. HA!

It's an idiot who hates wind chimes.

I still stand in WBU and dream. Once in a while I break down and buy something but I spend most of my time at Lowe's Home Store.

Glad those house sparrows gave up. There are plenty of places for them to live in Mall Strips.

I haven't seen Wild Bird Digest and will make a note to myself to buy a copy!

Oh, I wish the best for Maggie. Elephants deserve more than we give to them.

I've been wanting a glass windchime for a while now. They have a totally different sound then the usual metal tube kind. Very light and ethereal. Plus I love the colors as they go with the accent colors that I painted my trim. I also have some raspberry bushes that started in my backyard. I've kept my eye on them but the berries are usually long gone before they ripen.

Mary the name of the magazine is Birdwaters Digest, not Wild Bird Digest. They have a cool website that you can look at to get a taste of magazine.