I have nothing of interest to say today but I checked out the Elephant Sanctuary's website to get an update on Dulary.

Some of your know Dulary is The Elephant Sanctuary's latest resident. She came from the Philadelphia Zoo in May. Although her living conditions at the zoo were not ideal, she was greatly loved and dare I say that she was one pampered packyderm.

I had to laugh at some of the updates saying she was adjusting well and was starting to "respectfully" interact with her caregivers. Hmmm, I wonder what that means?

The latest update stated that her caregivers noticed she has taken up the hobby of rock collecting. But guess where she stores them: 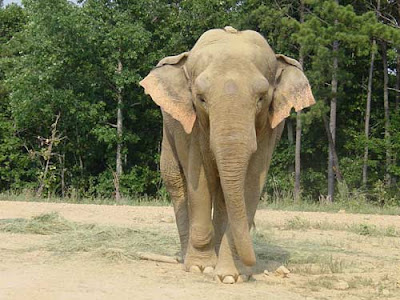 That is a riot! Thanks for the update.

Maybe putting the rock on her head is part of her training to be a well bred lady--you know, like walking with a book on your head to keep your posture straight?!?

Ok, there must be a reason for this but I can't stop laughing! If you or anyone knows the scoop on the "rock head", I want to know.

kgmom, you may be right! She's not used to being with other elephants so maybe she is trying to impress them with her good posture.

Mary, I really don't know what the scoop is on this. I do know that elephants routinely toss dirt, grass and hay on their heads and back for protection from the sun and bugs and maybe this is just an extension of that. BUT, elephants also have a great sense of humor. If I had time, I'd look through the Elephant Sanctuary's archives of photos as I know I saw a photo of an elephant that had put a tire on her head and was walking around with it for a while. Maybe those are the class clowns saying "look at me, look at me!"

Elephants with a sense of humor. I love it!

This reminds me of watching the orangs at the Natl. Zoo clowning around with their burlap bags and hats. I love love love this.
Thanks so much for the nice plug for Bird Watcher's Digest. It is the quintessential labor of love by a hard-working family. Keep posting, I love your stuff!