Remembrance of a gentle soul

Four years ago today I had to make the incredibly hard decision to put my dog Jiminy down. She had a series of small seizures the week before, then a small stroke. My vet came to examine her and said to give her a day or two since some dogs make quick recoveries. I must say the next day, except for a slight head tilt, she was completely back to normal. False sense of security since the very next day she had what I can only describe as a major stroke where she could no longer stand.
I had her a little over 4 years. When I moved into my house, I decided it was time to get a dog. I already had two cats (wow, was my life easy with only two cats!). I had done a lot of research and knew that I wanted a calm dog that would get along and not frighten those already in residence. That led me to greyhounds, which led me to a Petsmart that was having a greyhound adoption event. I went and was spending time with the greyhounds when I saw another group with another adoption event going on in another section of the store. I don't know why I went over there but there were about 5 dogs up for adoption. Lots of barking and jumping around. I then focused on this big furry black dog that was just sitting quietly watching her handler with, what I can only describe as a look of "please don't leave me". I asked the handler about her. "Oh, I just got her out of the humane society yesterday literally hours before they were going to put her down. Her family couldn't take care of her anymore. I think she is between 5 and 7 years old." Hmm, I thought looking into her cloudy eyes, closer to 7 or 8 years old. She had no exposure to cats so they didn't know how she would react. The woman said the others in her group were actually upset with her for taking such an old dog out of the shelter. They thought there was no way anyone would adopt her. I decided to take a chance on her and the handler was SO appreciative she would waive ALL the adoption fees and bring Jiminy over whenever I wanted. We decided on the next Friday since it was Good Friday and we both had the day off. 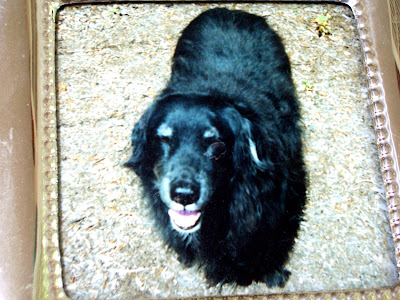 Sorry for the fuzzy photo, but it is a photo of a photo.

She came that weekend and never left. Her foster mom/handler got her records from her former owners. Imagine my surprise when I found out that she was 11 years old!! Can you imagine dropping off your 11 year old dog to the shelter? She had lived with these people all her life. I thought it would take a while for her to trust me and also thought she would be depressed about missing the only family she had ever known. It only took her a week to have my routine down pat. Only one run-in (well maybe two) with Apu the cat for her to realize it was best to leave all cats alone. In short, she was just the ideal dog. And, very smart. The second day I had her my boss came over to pick up some papers. He stepped in the doorway and Jiminy was standing next to the couch. Well, Butterball the cat was still pretty upset over Jiminy and was on the couch hissing. My boss got a little nervous and said "maybe I'll stay on the porch". I said "don't be silly"and offhandedly said "Jiminy, you're making Butterball nervous, why don't you come and sit by me." Jiminy then walked over and sat at my feet. My bosses jaw dropped open "how long have you had her?" Oh, just over 24 hours, I replied. I also remember once after a very tiring few days at work, I came home, and after I fed the cats, cleaned the litterbox, walked and fed Jiminy, I just wanted to sit down and read my mail. Well, Jiminy kept nudging me to pet her. I finally said, "Jiminy, mom just needs to sit here for a while. If you're bored, why don't you go into the tv room and get your bone to chew on." I kid you not, she cocked her head at me for a second after I talked, she walked into the tv room and brought out her bone and sat down at my feet and started chewing on it. 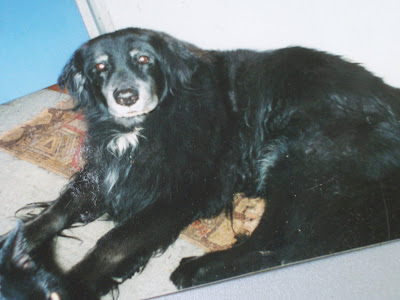 Man, did she have a lot of fur. Her vet records described her as a border collie/flat coated retriever mix

She developed arthritis in her spine about 2 years after I got her. By the time I put her down, she was almost totally deaf. But, again, being the smart dog that she was, we worked out a series of hand signals where she learned three things--I wanted to take her out, wanted her to stay, or I was very happy with what she had done.

She was loved by all who met her. In fact I credit Jiminy for bringing my neighbor Stephanie and I together. We have become good friends over the years. She had seen Jiminy for almost a year and wanted to know if I wanted to drop Jiminy off at her house during the day. She had a schnoodle named Koko that was a little anxious when left alone. My neighbor is an artist so she was home pretty much all day except for a few hours. Jiminy and Koko hit it off well and Stephanie would take them on little outings to creeks or ponds which Jiminy just loved. I would come home from work and pick her up, soaking wet and exhausted from a fun filled afternoon. Actually, Stephanie went with me to the vets when I had to put Jiminy down. Jiminy loved baby food. I had always split a jar for my cats for a treat each evening. Jiminy would then get to lick out the jar. When we went to the vets for the last time I brought a full jar of turkey baby food with me. Being surrounded by the ones you love the most, eating the food you love the most, then gently falling asleep. I can't think of a better way to leave this world.

About a year after Jiminy died, my neighbor surprised me with this wonderful portrait she painted 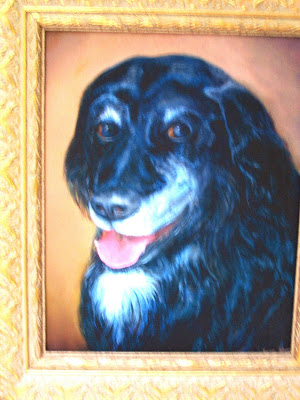 I will certainly get another dog at some point. But I think I will need to be retired. I have such a herd of cats right now that it just wouldn't be fair to the dog unless I wasn't working full time. One thing that I do know, though. I will always get a shelter dog, and always get an older dog (yes, maybe even an 11 year old). Jim-jim, you are still missed.

In honor of all the senior dogs languishing in shelters, the vast majority put there just because they are old and their owners don't have time for them any more, I'm providing a list of the top 10 reasons to adopt an older dog:

1. Older dogs are housetrained. You won't have to go through the difficult stage(s) of teaching a puppy house manners and mopping up after accidents.

2. Older dogs are not teething puppies, and won't chew your shoes and furniture while growing up.

4. Older dogs have learned what "no" means. If they hadn't learned it, they wouldn't have gotten to be "older" dogs.

5. Older dogs settle in easily, because they've learned what it takes to get along with others and become part of a pack.

6. Older dogs are good at giving love, once they get into their new, loving home. They are grateful for the second chance they've been given.

7. What You See Is What You Get: Unlike puppies, older dogs have grown into their shape and personality. Puppies can grow up to be quite different from what they seemed at first.

8. Older dogs are instant companions -- ready for hiking, car trips, and other things you like to do.

9. Older dogs leave you time for yourself, because they don't make the kinds of demands on your time and attention that puppies and young dogs do.

10. Older dogs let you get a good night's sleep because they're accustomed to human schedules and don't generally need nighttime feedings, comforting, or bathroom breaks.

What a wonderful dog Jiminy was. I can't believe it's been four years. She was just the best. The portrait of her is beautiful.

What a sweet, sweet dog, and a happy end to a good life. She lucked out when you took her home.
Chet Baker and I have conversations like that all the time. I remember the first time--he was just a puppy, and I said, "Chet, why don't you go in the living room and get your tiger?" And he looked at me and thought for a moment and disappeared, then reappeared with the tiger in his mouth. Now, that's just the way we talk. I love a dog you can talk with. Tonight, I saw a turtle in the driveway, and said, "Chet, there's a turtle crossing the driveway. You can go look at it, but please don't touch it. Leave it be." Needless to say, he looked, sniffed, didn't touch; left it be. The spirit of Jiminy lives on.

Shelter dogs break my heart--what it must feel like to see your family walk away and be left wondering when they'll come back. How can people not plan ahead when getting animals? I know some are sudden change of circumstances--but, all too often, it's become inconvenient.
It sounds like you gave her a wonderful life--and she, to you, memories.
I thought about you last evening--a HUGE oppossum walked across our patio--almost 3 feet nose to tip of tail!

Thanks all. Yes, it is amazing the psychic bond we develop with our animals. Although I think Chet Baker is in a league of his own!

Thanks for thinking of me Nina. I think I'm the only person who would be flattered when someone thought of me when they saw a HUGE opossum! I have a rather large one coming up for dry cat food regularly but nowhere near 3 feet long!!

Another major reason senior dogs are dropped off at shelters that I failed to mention is that they were growing old with their companions. Then their owners/pet parents suddenly become disabled or needing to be put into an assisted living facility. So sad on all accounts as seniors have to deal with so much loss already. I can't imagine having to give up my animals.

That is tear-jerking. I loved this post so much. Does have a sense of knowing who will cradle them and accept them. Then they will turn themselves inside out to please you. Please you, Please you. I talk to my dogs and they understand. They even talk back. (in my voice). Yes, I am nuts. But they do understand love and the look in your eyes and the tone of your voice.

That's a wonderful and heartfelt to Jiminy - a grateful dog.

Thanks Mary. I've read your dogs speaking through you, it's a hoot! They are just adorable. So glad your jaw is feeling better.