Update on Dulary -- She is home in Tennessee!

This is copied verbatim from the Elephant Sanctuary
*********************
After more than 4 hours of waiting, Dulary finally left the trailer and set all four feet firmly on Tennessee soil. But she did not stand still for long. The minute she touched ground she was interacting with elephants, sampling the vegetation, dusting and exploring.
Tarra caught her attention right away, in fact Tarra was the reason Dulary left the trailer. After a brief interaction with Dulary still standing in the trailer, evaluating Tarra’s intention, Tarra walked away and Dulary stepped right out of the trailer and hustled after her.
With Dulary in hot pursuit, Tarra hesitated long enough for Dulary to catch up and they both burst into vocalizations and gentle trunk touches. They were immediately comfortable with each other with Dulary following whenever Tarra moved. The two could not get enough of each other…and then Dulary discovered the vegetation…and dirt…and trees…and the exploration began. Every few minutes Dulary would look around to see where Tarra was and rejoin her to share more chattering and touches.
Then Dulary decided to check out the area on the far end of the barn. She grazed her way down the elephant trail until she came to a cross roads; to the right was the north road where, several miles away, Bunny and Shirley were engaged in their own habitat exploration, and to the left, the road that leads to the lake. How exciting it was to see Dulary start out on the lake road…all by herself.
But then it was time for Dulary to meet two more sisters. Delhi and Misty had been patiently waiting, literally for hours, to meet Dulary, so when Dulary turned around and headed back towards the barn, Misty got very excited. With much composure Misty approached Dulary. With Misty and Tarra on either side, Dulary was showered once again with sweet affection from both.
Dulary noticed Delhi at the water trough and without hesitation headed over to greet her. Misty, in a show of over-protection for the elder of the herd, raced over and squeezed between her old friend and new friend, but Dulary took no offence; Delhi and Dulary were still able to interact and the introductions were complete. Since this time, Dulary has remained in the constant company of her new sisters; eating, napping, sharing affection, and exploring her new habitat. Her assimilation into her new life has been remarkably instantaneous. 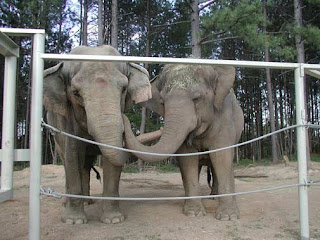 Dulary and Tarra getting to know each other. At 41 years old, this is Dulary's first contact with her own species since she was captured at 4 months old!

You mean Dulary was the only elephant at the Philadelphia Zoo!? That's terrible. It's amazing how quickly she is adjusting. Thanks for the update!

Well, for periods of years she was the only elephant. For a while she was housed with the two african elephants. From my readings and research though they really should be separated, like at the E. Sanctuary. African and Asian elephants are really different species, each have their own nutritional needs, and different body and vocal languages. Not to mention that africans are much larger and less trainable than asians. One of the african elephants attacked Dulary at some point so she was separated from them and was left alone in a barn for months before they could find another space for the africans.